Food is essential to survive, but sometimes food makes us sick. If we understand how microbes and bacteria contaminate our food, we will reduce the risk of food-borne diseases.

The bacterium "Listeria manocytogenes" is responsible for poisoning with fresh cheeses.

Most people have suffered from some food poisoning throughout their lives. Having diarrhea mixed with vomiting is something normal. Those who have these symptoms attribute the disease to poorly cooked food or drink or to past foods.

Food poisoning is an inappropriate term. The wide range of microorganisms (viruses and bacteria), fungi and protozoa can produce food poisoning. The disease can be due to two mechanisms: to real infections (entrance and proliferation of the microorganism in the human body) or to a toxin produced by the microorganism in the food. In the latter case, a true poisoning occurs. Therefore, it would be more appropriate to say the infections and toxications produced by food.

In this article we will focus mainly on diseases produced by bacteria, and although it is not very correct we will use the phrase of food poisoning. 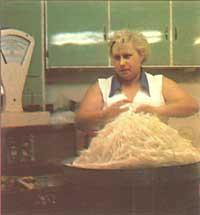 Handling of food in the best hygienic conditions is absolutely necessary to avoid poisoning with food.

As in all infections, the relationship with the hardening microbe does not necessarily produce disease. Normally, the food we eat is contaminated with microbes and we do not suffer damage. Natural defenses, such as heartburn and intestinal protection mechanisms, are sufficient to remove the bacteria we eat. Microorganisms that overcome the defenses of the stomach are found with the immune system and are eliminated by it, especially if this person has found them before.

Some microbial species cause the disease with a low consumption. In other cases, vomiting and diarrhea only appear when large amounts of microbes are consumed. However, people who usually eat a high dose of bacteria will be more likely to get sick than those who take it.

To avoid the ingestion of large amounts of microorganisms, food should be stored at excessively cold or hot temperatures for the growth of microorganisms, higher than 55ºC or lower than 5ºC. If the food is within this range, the bacteria grow and reproduce very quickly and often have terrible consequences.

The person's health status also has a lot to do with his or her response to contaminated food. Listerian bacteria, for example, do not cause damage to healthy people in general, but are more vulnerable to those who have weakened immune systems (pregnant women, newborn babies, elderly people, and medicines to inactivate the immune system).

The accumulation of chickens in modern hens offers optimal conditions to the dispersion of salmonella.

During their growth in food, some bacteria synthesize toxins. Most serious example

Or. This microbe only grows when there is no oxygen and produces botulinum toxin. When someone takes a meal with this toxin, their blood absorbs and passes from the blood to the nerve. People are aware, but they grow by paralyzing their muscles. Death occurs when the toxin reaches the nerves that control breathing or heart beat. Botulintic toxin is probably the strongest known natural poison. According to the pathologists, a gram of pure toxin can kill between 100,000 and 10 million people. The amount depends on the form of administration of the toxin. Possible presence of botulintic toxin in preserves.

Poisoning caused by bacterial toxins is more common. This organism is found in septic tanks, pigs, stables and infected wounds. It can also be in the nose of healthy human beings and in other parts of the body and does not harm the host.

When the organism comes to food and finds the right conditions for its growth, it occurs quickly and produces in the person who eats it serious peaks, diarrheics and fever. The patient can suffer a strong dehydration and therefore lose mental control. 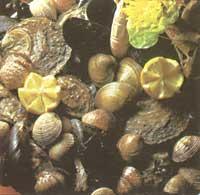 Sewer waters that flow into the sea can contaminate coastal shellfish and consequently also the consumer.

can grow in salted and cooked foods. It is usually related to poorly preserved dairy, native, and processed foods.

Some bacteria produce toxins in the host body and not in the food you eat. For example, the cholera generating microorganism reproduces in non-chlorinated waters. When someone drinks this water, many cholera microorganisms reach the stomach and there they release the toxin. Its effect is the investment of the flow of water and salt in the cells of the stomach walls. Consequently, there is a dizzy spill and a watery diarrhea. The patient gets rid of quickly and if not enough water is drunk, the inheritance is near.

The ghost of bars

A subgroup of this type contains spores very resistant to heat. If they contaminate food, especially meat, they are able to withstand cooking. If the dish is kept warm, as in large communal dining rooms, the spores germinate and multiply. 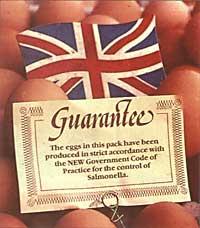 As a result of last year's salmonellosis epidemic, this type of "Guarantees" could be seen in Britain's food stores.

After eating these bacteria produce spores in the stomach and during the process they release a toxin. This toxin produces comburent tripaquomines and diarrhea at 9-12 hours and lasts two days. The disease ends by itself and, except in the case of children, the elderly and pregnant women, is not usually serious.

Among the poisonous bacteria without lips are those of the Salmonella family. Salmonella typhi transmits tifus drinking contaminated water. However, this salmonella is quite far from the well-known salmonella bacteria, which produces a lot of food poisoning, even if it is of the same genus.

The salmonella that creates the typhus is only related to humans. However, the other salmonellas, which produce poisonings with food, are related to many other species of animals. Among them are the eggs we eat, red cows, sheep and pork products. However, rats, cats, and other rodents can contaminate other kinds of foods with salmonella.

Many poisonings of salmonella eggs (tortilla, mahonesa, etc.) They are produced through In the case of eggs, salmonella can be transmitted through a stained skin of manure, but in some cases the egg can be contaminated. The bacteria can contaminate the ovaries and ovaries of the chickens and with them the yolk and egg white. If these eggs are eaten raw, they will produce an indignation. The truth is that there are very few contaminated eggs, but as millions are consumed throughout the year, the number of sick people is not small. The only way to turn off these infections is by the complete cooking of the egg (until the bud hardens), since the heat kills the salmonella bacteria.

Route of transmission of food poisons.

Therefore, microbes that produce food-based poisoning are found anywhere and expect adequate environmental conditions for their start-up, while no damage occurs. However, if the conditions are adequate, they reproduce very quickly (a bakte river generates 512 bacteria in 3 hours) and the risk of poisoning increases exponentially. The prevention and adoption of adequate cleaning and health measures is, as in many other occasions, the most just.