The disorder and death of humanity: are they synonymous?

Represent the state. Four people in a square room: two columns and two rows, one at the same distance. From the higher perspective we would say that this arrangement is symmetrical, i.e. ordered (Figure 1).

Let's change the stage. All the people within the room have been asked to take a step that has been limited to four directions: forward, backward, left or right. It could be, without agreement between them, that everybody moved forward. If this is the case, the order will be maintained. The probability that each of these people will make that decision is reduced, from a quarter because each one can move in four directions. As the probability of four people acting equally is even lower, 1 part 4x4x4x4 or 1 part 256. 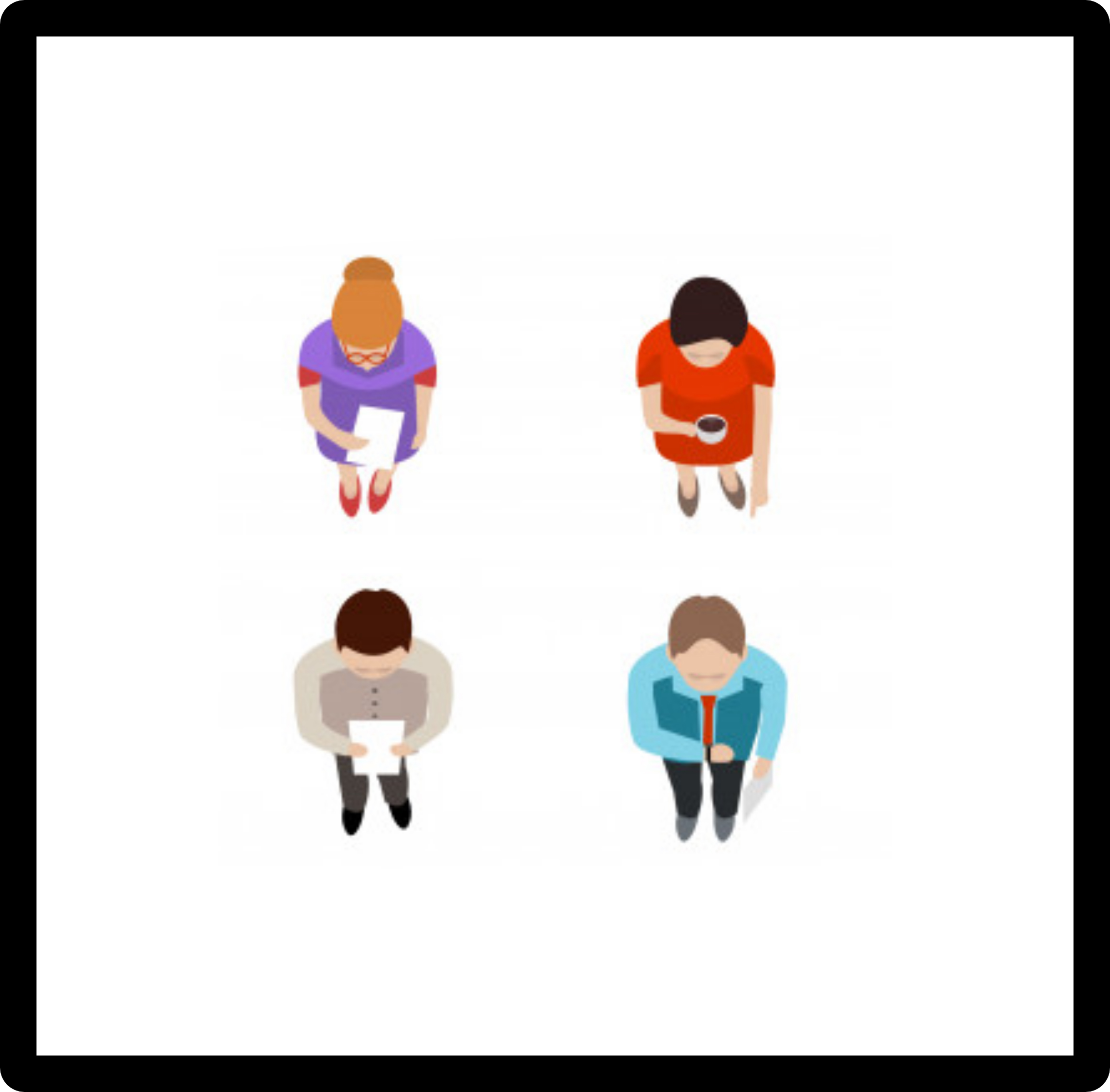 If instead of moving forward, backwards, to the left or to the right simultaneously, the distribution would not change, but the probability of maintaining harmony would still be 4 to 256 or 1 to 64. Slight ascent, almost negligible [1].

Let's go to the last scenario. On this occasion they have been given the freedom to go to any direction without mobility restrictions. Here it is. Due to the possible and endless situations, it will be sufficient to take a step to definitively break the symmetrical ordination and increase the disorder in an instant.

All this, defining a simple situation of four people. Finding millions and millions of atoms that can move in nature in infinite directions leads us to conclude that spontaneously occurring processes tend to increase disorder. A clear example of this is the sinking of a ship, the explosion of a volcano, the flow of descending water from the streams of the mountains… The scientist Rudolf Clausius came to the same conclusion in 1850, and for the first time defined the term entropy and established the second principle of thermodynamics, in order to explain the processes that occur in nature [2].

The first principle of thermodynamics is well known. Perhaps not explicitly, but we have all heard about the principle of preserving equivalent energy. “Energy is not produced or destroyed, but transformed” [3]. In Greek, the word thermodynamics means heat movement, and the scientist Rudolf saw that, in systems of different energy, this movement was always produced with the tendency to equalize energy [4].

Let us see more clearly with a simple example: a glass full of ice (Figure 2). What about cubits? Over time, the ice melts and disappears. Why? Because of the different energy concentrations that we can find in the system. Initially, the temperatures or energies of the ice and the medium are different. Therefore, this energy flow is transmitted from higher to lower concentration and these energies tend to equalize, that is, the medium brings heat to the ice and the temperature of the ice rises and melts as the medium goes down. 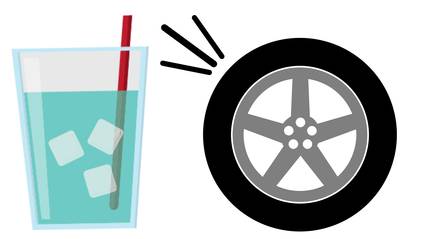 Figure 2: [Melting of a glass and expansion of gas from a perforated wheel]. Ed. Ainhoa Oliden

Clausius defined entropy (S) to indicate whether this energy movement or distribution was uniform or not, and established the second principle of thermodynamics: the more uniform this energy is dispersed, the greater entropy [4]. In other words, when the energy is fully evenly distributed, the entropy of the system is maximum [5]. Therefore, the entropy of a homogeneous body is automatically distributed and expanded throughout its volume, moving from an orderly state to a disordered state [6].

To better understand, let's take the example of ice above. In fact, at first, in solid state, molecules are well-ordered: packaged, free of movement. On the other hand, when they move to liquid they have a wider range of displacement and disarray, and even more so when they are transformed from liquid to gas (Figure 3). 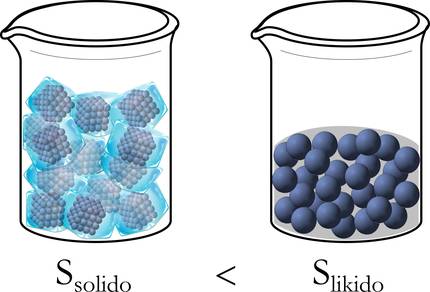 Figure . [Increase of entropy in the transition from solid state (ice) to liquid]. Ed. Ainhoa Oliden

Let's now review Rudolf's theory in everyday life. For example, it is more possible to find our room upside down than to find everything orderly and correctly. We can think that the best place to store our pants is the closet, with each of these suits hanging on its own hanger. However, it can be given on the floor, on the chair, in bed or elsewhere. It seems to be written! This reality is uncontrollable and inevitable, since the probability of maintaining order is considered negligible. Therefore, finding the cause of entropy increase would be insignificant.

How to get order?

We have learned with experience that it is very difficult to achieve our desires effortlessly. In turn, the second principle of thermodynamics argues that processes not own can only occur by working in the system itself.

So far, however, we have only talked about own processes (spontaneous processes). The facts considered not spontaneous are those that do not occur naturally. And what do we call natural? [Process of continuous growth of entropy]. We are used to seeing processes that increase entropy and, without realizing it, we consider them normal.

Therefore, every process of our life is a sign that time advances. If we suddenly observed that entropy decreases, the only way to explain it would be to think that time goes back. Suppose we're watching a movie backwards and we see a drop plate from the table to the ground, backwards. Surely we would laugh, because we know that the fact that this occurs is impossible [1].

It is therefore clear that external work is necessary for non-spontaneous events [6]. However, despite the decrease in entropy, the total entropy of the system and its surroundings will increase over time, because the arrangement of one system always implies the disorganization of others.

Are we going to thermal death?

It can be said that the entropy of the universe is growing continuously [7], thus giving a pessimistic vision for the future. A continuous increase in disorder means that differences in energy concentration are disappearing. By fully equalising the energies of the systems, no more jobs can be achieved or carried out and no further changes can be made. So could we say that we are approaching thermal death?

Let's think about a cell phone. Mobile phones work thanks to batteries, that is, the chemical reaction produced inside them. They generate an energy flow from the point of highest to lowest concentration, which causes the operation of the mobile. When the chemical reaction inside the battery is exhausted or the balance state is reached, where we cannot see net changes, the gradient disappears and a uniform energy level is obtained. In other words, the mobile dies.

To resurrect the phone, you need human energy and it comes fundamentally from the sun. Our star is mostly made up of hydrogen, which, like everything else, is degrading. Given the high density and temperature, thermonuclear reactions occur in which the nuclei of the hydrogen atoms become nuclei of the helium atoms [4, 8]. Again, an example of the equalization of energy concentrations. As we know today, at the end of solar hydrogen, the energy will be totally matched, and the same will happen to any other star in the universe, as well as to everything in the universe.

If the second principle of thermodynamics applies to the entire universe, energy concentrations in all places are leveling and the cosmos is degraded. When this energy is fully staggered, entropy will reach its maximum and from there nothing will happen. Although energy will remain present, there will be no tendency to change or generate energy flows to initiate reactions.

Should we lose hope?

In fact, if you look at the creation of the universe, you can see a prince of light. We were born out of nowhere, and it will not be possible to create it from scratch! As indicated in the mathematical equation, 0 = (+1) + (-1). It is possible that where there is nothing, positive and negative energy can be generated and then generate something greater through changes [1].

In any case, it's not that serious. The process will take several years to reach the end and the universe, as it exists, will not only live in our time, but throughout the life of humanity and the Earth [9]. 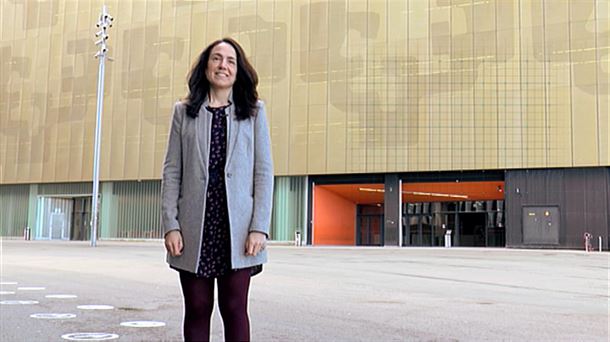 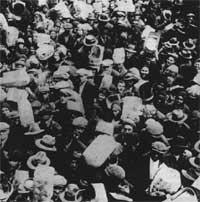