The researchers have come to the conclusion that a jaw found in the plain of Tibet at 3,280 meters of altitude is the first denisovar discovered outside the cave of Denisova. At 160,000 years of age, they have confirmed that their inhabitants were adapted to great heights long before the arrival of modern man.

All information about the Denisov was based on fossil fragments found in the cave of Denisova (Mounts of Altai, Russia). Some of his vestiges have shown that they were hybridized with Neanderthals, while genetic analyses have revealed their relationship with sapiens, which have found genetic characteristics from denisovars in some Asian, Australian and melanistic populations.

Among these genetic characteristics due to the Denisov is the EPAS1 allele, which allows the inhabitants of the area of Tibet to live in low places in oxygen. However, the mountains of Altai are 700 meters high, so it was logical to think that their remains should also appear at higher altitude. 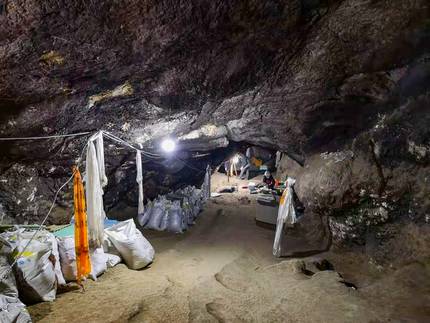 The jaw is found in the Tibetan plain, in the cave of Baishiya (Xiahe). Ed. Dongju Zhang, Lanzhou University

This jaw, found in the Tibetan plain, in the cave of Baishiya (Xiahe), has therefore provided very valuable information. Using uranium/thorium technique and analyzing the carbonate layer it covers, it is estimated to be about 160,000 years old, that is, as the oldest fossil in Denisova. For their part, morphological studies have made it clear that it is neither Homo erectus nor Neanderthal, but that it presents important similarities with the fossils of Denisova. Proteome analysis has also confirmed its denisovous character.

Known as the man of Xiah, all the conclusions have been published in the journal Nature. The study was conducted by researchers from Langzhou University (China) and the Max Plank Institute (Germany).