Talented computers for grammar and syntax are questioning Chomsky's theory, linguistics. If computers can learn by trial/error, why can't humans act the same?

Where does the grammatical and syntactic instinct come from? Our parents or our genes? Of our parents, of course, aviorists said in the first decades of this century.

Noam Chomsky, an American linguist, however, had different ideas and in 1950 attacked aviorism. According to him, all languages, despite having shallow variations, have a common set of grammatical rules that children cannot acquire only by listening to their parents. We carry in our genes fundamental elements of language. 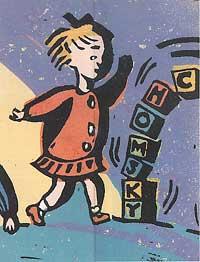 Today, after decades, his theory is under discussion because of the influence of a generation of researchers. Computer-simulated processing of complex information in the brain, these researchers begin to investigate what is behind Chomsky's rules. And the message that comes from some aspects is clear: the theory of modern linguistics can come to decay.

To understand the debate, Chomsky's ideas must be analyzed in detail. Its rules include all aspects of language, from syntax (names, verbs, etc.). from combination mode to phonology (to how to combine phonemes and language sounds).

Why has Chomsky's theory had such recognition? The main reason is that this theory explains the “production” of the language; in other words, the ability to understand and produce phrases that we have never completed before. Chomsky insisted that the person who has acquired a finite repertoire of language rules can understand and create an infinite number of phrases.

The opposite challenge comes from a school of thought within neuroscience, connectionism. According to this, mental functions, learning and knowledge, for example, are rooted in the way neurons are interconnected and communicated in the brain. This school has also triggered the mentality of the relationship between intelligence and brain. The debate, accompanied by computer-simulated neural networks, has now reached the world of linguistics. The main idea is that the brain processes information using neural networks.

Nerve cells that “speak” to each other function by transmitting electrical pulses through the “cables” called axons. Although the brain is divided into zones, each of them processes information similarly. That is at least the theory. If we consider anatomy, it seems that most brain networks are very compact. A neuron receives signals from hundreds of thousands of neurons. This can affect the level of your electrical activity and therefore the signals that pass to other neurons. 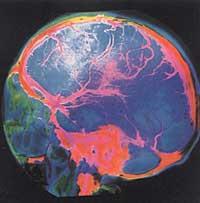 Brain neurons. The connections simulate a very simplified model of this network.

One of the basic principles of connectionism is that many brain neural networks, or most, suffer small changes related to formation. For neurophysiology these changes occur in neuronal synapses. The experience we incorporate by exciting certain neural subsets more frequently than others can selectively reinforce some synapses, making the appearance of certain models of electrical activity more likely than others. Such models can be the basis of learning and memory.

How can this approach help us understand linguistic processes? Around 1985, two psychologists from the Californian university can respond to a neural network formed by Rumelhart and McClelland. These only analyzed a small part of the language.

Note the simplicity of the network: It consists of connecting 460 “input” units in parallel with 460 “output” units. Each of these units (the network neuron) can be connected or not connected. Verbal roots can be programmed into input units. These send signals to output units through connections where the pass forms are encoded. Each output unit receives signals from many inputs, some of which will activate and inhibit. The combination of all these inputs will “decide” whether or not an output unit will be activated.

How can a mechanism of these characteristics learn grammar? Rumelhart and McClelland discovered that the network can be trained to complete the verb passes. This training consists in showing to the network the present and past forms of a certain number of verbs. After presenting a word, the network must find the proper form of the passage. The lack of correspondence between the output of the network and the correct form of the verb will provide the basis for the formation of the network, learning the algorithm called “backward expansion of error”.

This algorithm has two levels. First, a verb is programmed in the input units, from which signals are sent to the output units. Secondly, the verbal time of the passage provided by the output units is compared with the correct form given by a “teacher”. The weights between connections change so that the output is closer to being correct when the input is presented again.

McClelland and Rumelhart believe that this teaching process mimics the feedback children receive in learning their past. 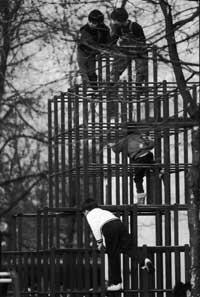 The problem with Chomsky's theory is that the network does not use language standards. Learning the verbal forms, he compares his connections according to the correlations he detects between the input and output forms. For example, the correlation between the “-ow” and “-ew” terms ensures that the input units with “-ow” are in close connection with the output units that represent “-ew”.

Although there are no rules and that the treatment of regular and irregular verbs is the same, after a long period of time the network can give the correct form of the passage. The most serious threat against Chomsky derives from the correct treatment of unfamiliar irregular verbs. After training for “wept” “weep”, “clung” for “cling”, etc. can give.

An intense debate has emerged between researchers like Steven Pinker and members of the Massachusetts Institute of Technology. For them, a rules-based system is still needed to learn some features of past forms. They have proposed a “hybrid” learning model. In this system neural networks are limited to collecting information about irregular verbs and regular verbs are treated with special rules.

Pinker prefers this hybrid system for many reasons. First, it says that the neural network model is inappropriate because it excludes the meaning of verbs. For example, the passage of the verb “lie” in phrases like “saying something false” is “lied”, but taking “lie” in the sense of “lying” is “lay”. The model would treat both forms equally, as phonology is the same in both cases.

Secondly, Pinker claims that people treat regular and irregular verbs differently as in the hybrid system. For example, Pinker has found that the frequency at which a verb appears in the language affects the time we need to create the form of the past, but only if the verb is irregular. Therefore, simple irregular verb forms like “go” occur much faster than verbs like “shrink”, but there are no such differences between regular verbs. The connects investigate whether they find more sophisticated neural networks to see if Pinker's discoveries can be imitated without resorting to language rules.

If a success was achieved in this way, it would strengthen the approach contrary to the theory that defends that we have a range of rules in the brain. The debate is the last manifestation of the old debate between the empirical, the approach that all knowledge has been learned, and the rationalists, who say that we already have part of our knowledge at birth.

Chomsky's theory about the spontaneity of language was assumed by rationalism. In short, although the child hears a limited number of phrases, he acquires the ability to create infinite grammatically correct phrases. A psychologist would say that there is stimulus poverty. Children know, for example, that many verbs can become passive in English. It seems that, generalizing, the application of the rule to all verbs would be reasonable. This, of course, would give non-grammatical phrases. But there are no obvious reasons for children not to learn this general rule. If some linguistic constructions can be generalized, why not all?

Chomsky's answer to this question is that newborn children have their own mechanisms that lead them to learn grammar correctly. In other words, certain genetic components exist in language acquisition. The best way to demonstrate this is to find people with language alterations. Therefore, there are many linguists interested in analyzing the linguistic alterations of a London family (16 out of 30) about inheritance. They can understand language and produce words smoothly, but they make mistakes.

This inherited linguistic alteration suggests that it may be associated with a simple gene. Geneticists have to identify this gene, but since research is in the first phase, most researchers fear drawing conclusions. 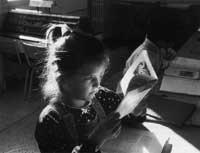 Have you already adopted language norms since its creation or internalized them from the relationship with parents and interaction with others?

Among the skeptics are the disciples of connectionism. As we have seen before, what they defend is the theory that children learn from pure language, and make them unconsciously adapting neural network connections in their brains. Another experiment in this field has been conducted by a Californian university language researcher, Jeffrey Elman, who has developed a different neuronal network.

The network built by Elman can learn a simple syntax. Unlike Rumelhart and McClelland networks, Elman can learn the relationships between consecutive input models. Learn the continuous sequence of words (separated by brief interruptions) and compose grammatical phrases like “John feeds dogs”. When each word is presented, the network tries to find out what the next word will be as output. You can “remember” the words before the phrase, since the internal representation of these words, which are units that are activated in special models, are continually replenished to circulation. Recirculating the words “old” affects the network’s interpretation of any “new” word.

In one experiment the next word that the network could invent was the name or verb and then choose one of the restricted selections that it had at its disposal. Once done, you could change the weight of your connections to improve the possible connection between the predicted word and the correct word.

As training progressed, the network was increasingly better at predicting the category of the next word, indicating that it had learned the relationship between singular names and singular verbs.

He also learned grammatical details. Elman studied that names and verbs were classified into grammatical categories. He even classified verbs as transitive and imtransitive. The network did not receive direct information on these categories. Induction deductions taking into account input statistics.

What Elman's network highlights is that the child's grammatical knowledge rather than being rules-based could be based solely on the statistical information about the relationship between different types of words.

On the one hand, the discussion between Chomsky and followers and neural network users on the other is still underway. Undoubtedly, to the extent that built neural networks are closer to reality, the debate will also be more elaborate and precise. But the connection already pushes some linguists to rethink ideas about language acquisition. 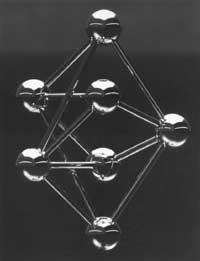