The Origin of Life, One Hundred Years of History: From Oparin to Today

XIX. the origin of Sunday life was explained by "spontaneous generation" or spontaneous creation. French researchers Lamarck XVIII. When in the twentieth century he presented the first evolutionary theory, he presented the concept of evolution. According to their theory, the environment can alter the appearance and heritage of living beings.

This theory was based on four premises: The first is the presence in nature of different natural levels; the second is the internal tendency of all living beings to change; the third is the inheritance of the obtained characteristics and the fourth is spontaneous creation or "spontaneous generation".

In 1859 he published in his book written by Darwin his theory of evolution. Darwin, in many ways quite Lamarckian, denied the ability to change the environment over living beings. To explain the evolution of species, it was attributed to an internal capacity or characteristic of beings, despite not knowing anything about genetics at that time, and the environment should maintain or not that characteristic. Therefore, his theory was based on two premises: the evolution of species and the selection of nature.

Throughout history, Haeckel viewed crystal structures as a transition between living beings and inorganic matter. He divided living beings into three groups, the Kingdoms of Plants, Animals and Monera. He pointed out that the first living being should be from the kingdom of Monera and also autotrophic, that is, the fixator of atmospheric carbon dioxide.

In the scientific literature of the beginning of this century there are other ideas that explain the origin of life, such as that of the extraterrestrial origin of life or the Panspermia (Arrehnius, 1908), the idea that explains the origin of life in high temperature thermal sources (Harvey, 1924), the hypothesis of a basic enzyme created randomly in the initial oceans (Troland, 1914) or the theory of synthetic origin.

We cannot forget, however, the theory of the role of organic alien acids in the origin of life (Chamberlin and Chamberlin, 1918). In 1926, Muller described the gene itself as his first life, with autocatalisis (reproduction), heterocatalisis (metabolism) and mutation capacity (evolution). Despite the abundance of these theories, most were incomplete, since the known characteristics of biological systems were counterposed or had a great speculative view, resulting impossible.

It is known that when Oparin first wrote about the origin of life, the discussion of the problem was diverted to mere speculation. As he has pointed out, at that time it seemed impossible to resolve objective and scientific research methods. Oparin did not make an experimental single to explain the origin of life, but elaborated his theory by collecting results and observations from many subjects and trying to apply Darwin's evolutionary principles to inorganic matter.

Oparin proposed that the origin of life took place on earth, a fact that was very early in earth history. In the beginning simple compounds were formed through different processes, which later reacted to form polymers. They also organized more complex structures that gave rise to life. This idea is quite new, as Oparin first mentioned it in 1924 and later in 1938, with the collaboration of Haldane (1929), Urey (1952) and Bernal (1952). They are often called Oparin-Haldane hypothesis or heterotrophic hypothesis.

Later, Urey, based on Oparin's ideas and taking the components of the original atmosphere of the Haldan hypothesis, proposed that the use of methane (CH4), ammonium (NH3), water vapor (H20) and molecular hydrogen (H2) would enable the chemical formation of organic compounds. Within a year, in 1953, Miller, a recent graduate, conducted a classic experiment today. After applying electrical discharges to compound precs as a source of energy, he obtained amino acids and nucleotides. 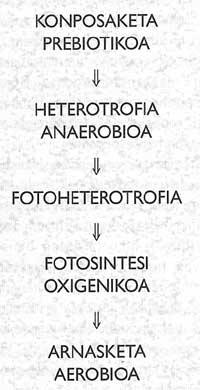 In Oparin he was born in Uglich in 1894. He graduated in 1917 from the University of Moscow after studies of natural history, biochemistry and plant physiology. Educated with Haeckel's ideas, he accepted the division of living beings into three kingdoms (plants, animals and protists), while crystal considered it to be a transition between life and non-life, defending the evolutionary continuity of life and non-life. He also believed in Darwin's evolutionary idea and natural selection, since at that time Darwinism was widespread in Russia.

Oparin was a very good physiologist and eliminated the idea that the first animate was photosynthetic, since photosynthesis is a very complicated process (in which enzymes, chlorophyll and carbon dioxide fixation mechanisms are needed), which can only occur as a result of evolution. For Oparin it was impossible to reconcile the sophistication of photosynthesis with Darwin's ideas of gradual evolution to indicate that life arose from autotrophic metabolism.

In his opinion, the first form of life or progenot should be anaerobic fermenter. In the original reducing medium there were very few or no free O2 and the compounds generated in the time before the appearance of life would abound. Based on these premises, he proposed that evolution follow the following steps:

From the simple inorganic compounds generated before the appearance of life in consonance with the origin of the Earth, more complex compounds were formed that, organized in droplet structures formed by colloidal gels (called coacervates), constituted the first form of heterotrophic anaerobic life. He explained the gradual origin of life, but at all its slow origin. Oparin passed Darwin's instructions from the biological field to evolutionary chemistry by completing his theory.

It has been 102 years since its birth in Opari and the most widespread and orthodox theory that explains the origin of current life explains the abiotic formation of organic compounds in the primitive broth, at mesophilous temperature and in reducing medium.

Given these premises, the idea that the metabolism of the first live is anaerobic fermenter is an idea of great coherence. On the other hand, regarding genetic information, it seems that the first molecule of information could be RNA, apart from genetic information, can be replicated and demonstrated its catalytic activity, that is, it is able to carry out some biochemical reactions. This is called the world of RNA.

Since the time of Oparin it seems that ideas have not changed so much, although in recent years some hypotheses have transformed the validity of the Oparin scheme. Many scientists, based on these theories, have done much in Ian, among them the most orthodox scientists. 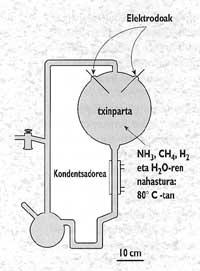 What does this mean? That the idea that the origin of life is thermophilic is nothing nonsense. This rejects the mesophilous origin of life and thus the orthodox theory that has been formed in its surroundings. If the temperature of the original earth is high, the idea of primitive broth is impossible, since the water would be in the form of steam and not in the liquid state. Along with this, many of the compounds that can be formed abiotically would be highly unstable at these temperatures

the case of ribose, for example, the compound needed to form the RNA

As for the formation of nucleic acids (both RNA and DNA), there are several theories that propose the polymerization of nucleic acids on crystals or minerals, that when taking the role of the molds do not need water to carry out polymerization reactions. Therefore, for the new questions we will have to invent new answers. The overthrow of a theory will force us to approach alternative theories.

In 1988 a German researcher mentioned the new original, coherent ideas of life. Mr. Wachtershauser mentioned the importance of pyrite (FeS2) in an original hot soil. This meant a chemo-autotrophic metabolism, that is, a metabolism that can use the inorganic compound as a source of energy and carbon. Nowadays there are minerals such as bacteria and archeobacteria that, being inside pyrite, use it as a source of energy.

Anaerobic chemolitrophy is only given in archaeobacteria. Therefore, according to this author, the first form of life that can be produced in the original anaerobic hot soil is anaerobic chemolithotrophy, and seeing the living beings that exist today, the kingdom of archaeobacteria would be the group most related to this first form of life. This idea so far excludes the ideas of classical theory by diverting the research paths from the problem. In addition to this theory, there are others that try to explain the origin of new living theories and that, if any, should be taken into account.

Research on the origin of life has always been an exciting topic in the scientific world. How did life arise, under what conditions, what kind of way of life was the first and how did it evolve, if it is possible that somewhere else in the universe we have the same way of life we know or some other kind of life, if the conditions of the original earth are repeated, would it recreate the kind of life we know today? These and many other questions have not yet been answered and for this, scientists have the responsibility to answer these questions by objectively analyzing work, suspicions or data, accepting errors with humility and eliminating subjectivity, which is the only way to advance science.