Distribution of biomass on Earth 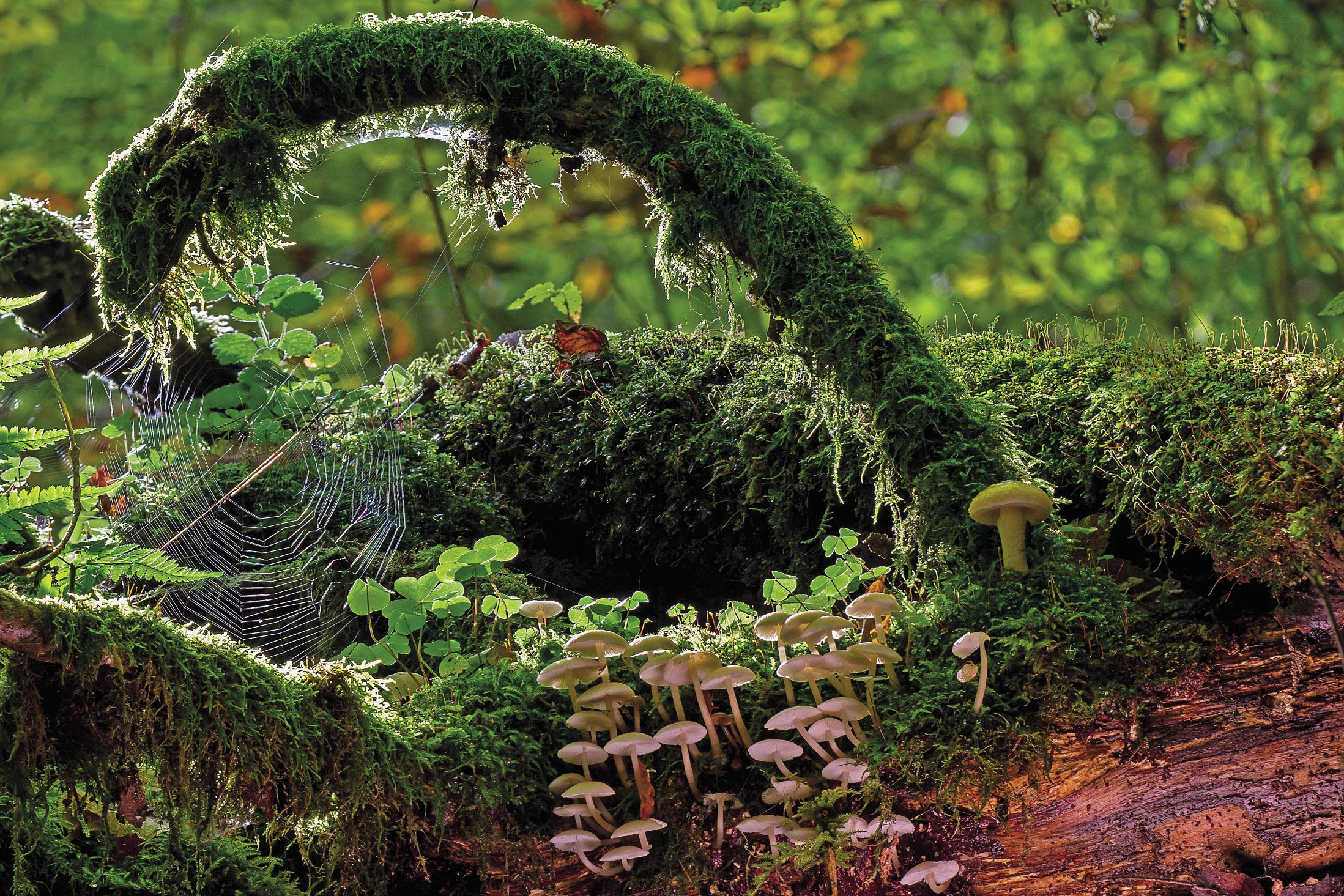 Ron Milo and his collaborators published last year in the journal PNAS an estimate of terrestrial biomass. This showed that the plants contain 450,000,000,000,000 tons of carbon biomass (450 gigatone C, 450 Gt C), of which 30% corresponds to roots. After the huge biomass of plants, the second largest group are bacteria (70 Gt), while the rest of groups are much less: fungi have 12 Gt, archaeologists 7, protists 4, animals 2 (0.06 of them humans) and viruses 0.2.

Although 99% of plant biomass is terrestrial, it is observed that in animals the opposite occurs, since almost 75% of the biomass is found in the sea. And although we represented that deep subsoil is a purple zone, there is 15% of the planet's total biomass, almost completely microbial.

As for the sea, it can be said that it is mostly microbial. Bacteria make up 70% of marine biomass, although in proportion most microbes live underground (90%). The remaining 30% of marine biomass is composed of arthropods and fish.

The case of arthropods, whose biomass is very modest, is striking, despite being the richest in number of species, with some 1,000,000 species described. In addition, among all stand out a few species: Euphausia, antarctic krill, is by itself 5% of the biomass of arthropods, and termites have as much biomass.

All these figures are largely due to human activity and we have analyzed them with the help of three scientists: Arturo Elosegi Irurtia, UPV Ecological Plant, Lur Epelde Sierra, NEIKER Microbial Ecologist and Xabier Irigoien Larrazabal, AZTI Oceanographer. 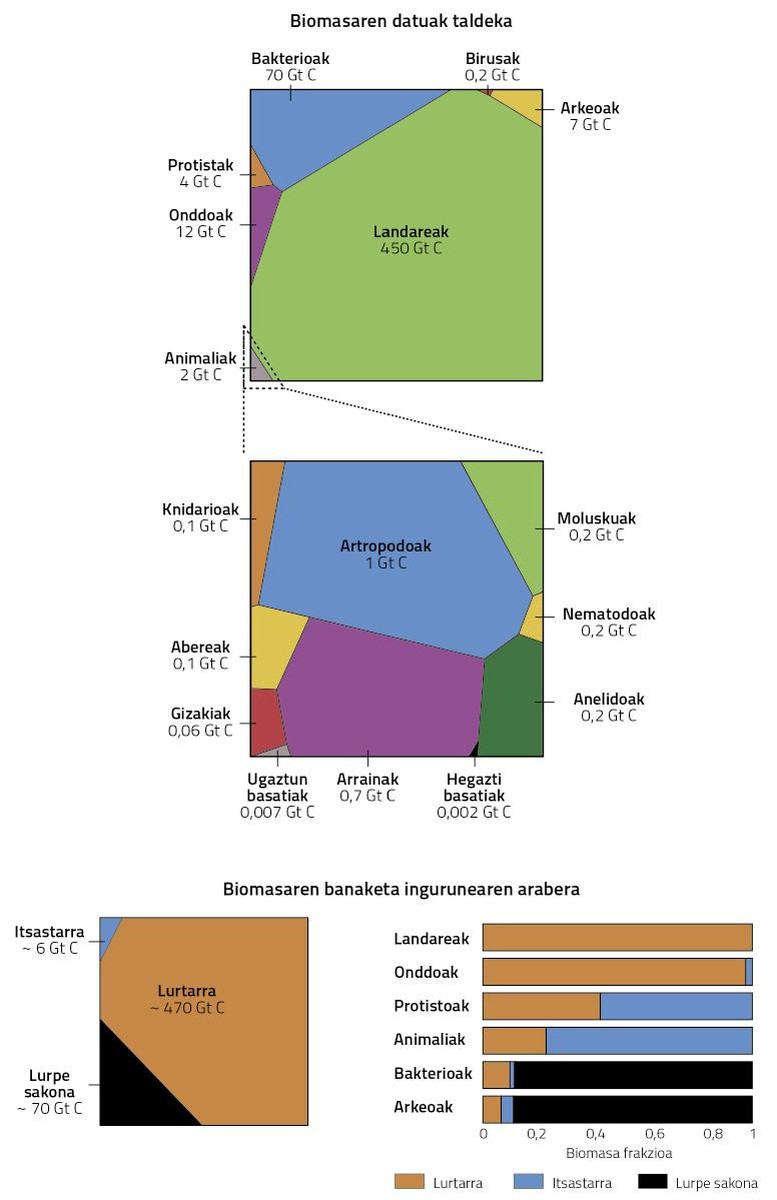 The scientist has surprised to discover that much of the biosphere's total biomass lives in the deep subsoil. Bacteria and arches are hidden living creatures that inhabit underground aquifers and below the ocean bottom.

“It didn’t seem so much to me. It's a lot 15%! —affirms Arturo Elosegi—. I think the bacteria are at low concentrations at these depths, but in the end, when we take into account the great depth of this layer, they appear enormously high biomass. These bacteria, unlike those of the terrestrial surface, grow very slowly: to regenerate their biomass they need thousands of years”.

According to Lur Epelde, beyond biomass, biodiversity and biodiversity have a capital importance in the biosphere. “If we consider these two factors, the planet Earth is completely microbial. Although plants predominate in biomass, in terms of biodiversity and bioabundance, the bacteria gain significantly. The bacteria are responsible for the most important ecological processes of the planet: they break down organic matter, recycle food, fix nitrogen, are responsible for much of the photosynthesis… Without them we would not be here the others.” 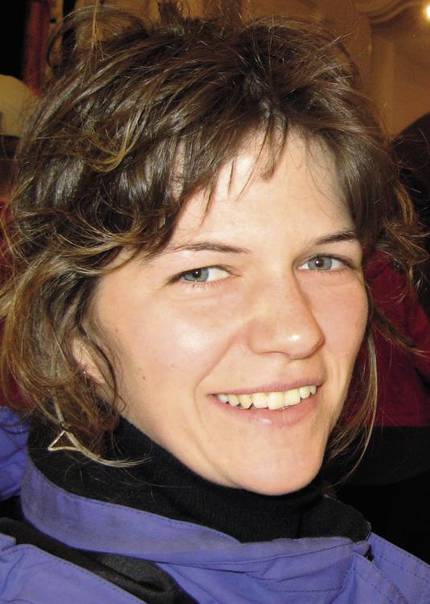 This study also revealed the peculiarities of the sea: the ocean occupies 71% of the surface of the planet, although the terrestrial biomass is 80 times higher than the marine one (470 Gt C vs 6 Gt C).

But the sea has the peculiarity that, despite its low biomass, it has a primary productivity equivalent to the land and in proportion it can reach a ratio of consumers/producers very superior to the terrestrial one. On Earth, 22 gigatones are needed for each gigatone of consumers and only 0.2 in the sea. That is, 110 times less.

“From our playful point of view, we have a hard time understanding it,” says Xabier Irigoien. We believe that many plants are necessary to feed a few animals. But in the sea there are many cows and few herbs.”

This inverted forage pyramid has a simple explanation, according to Elosegi: “The main producers on land are the trees, whose biomass is mostly wood, not consumable. Therefore, the difference between producer and consumer must be very large. At sea, the main producer is phytoplankton, with a low biomass but with a very high renewal rate. What is being consumed reproduces continuously. Therefore, it can feed a large biomass of consumers. On land, the producers produce slow and stable biomass, and in the sea it is just the opposite, they are fast speed producers”. 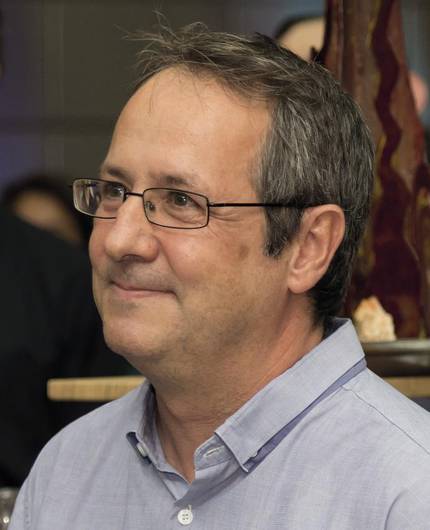 The planet at our service

Our species has had a brief history on Earth, for the moment. Since life appeared, we have only been at 0.05% of time. A nonsense against other species. But the changes in the plans have been many. Three of them, with great ecological impact: the domestication of wildlife, the Industrial Revolution and the unstoppable growth of the human population.

Since humans spread across the planet, the biomass of wild mammals and that of plants in half has been reduced to six. But beyond biomass, the absorption of the biosphere and its influence is at stake. Are we aware of the magnitude of the violation of the biosphere?

As for vegetation, there are already very few wild forest areas. It is practically exploited in its entirety for agriculture, livestock and wood production. As for animals, human biomass is already ten times higher than that of all wild mammals (0.06 Gt vs 0.007 Gt). The biomass of domesticated animals (0.1 Gt) is even greater. 15 times larger than wild mammals. In summary, only 4% of mammals are already wild, the remaining 96% are us and the animals of food.

In birds there is also the same phenomenon: the population of domesticated birds is almost 3 times higher than the wildest (0.005 Gt vs 0.002 Gt). In almost all vertebrates we can see the brutal effect of domestication. The only exception is fish.

Can we dominate the sea?

The sea is a difficult means for human beings. We have conquered the coast and other marine protected areas, but it is not easy to dominate the open sea and the deep sea. “Until very recently the sea has been exploited by fishing, as if the land were exploited by hunting, almost like 5,000 years ago,” says Irigoien. 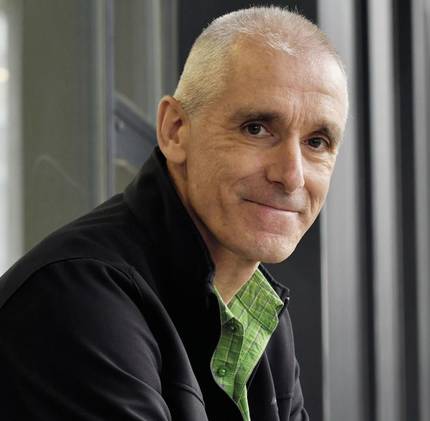 “In recent years, however, the production of aquaculture has already adopted the fishing dimension. It is noteworthy the development of aquaculture on the Chinese coast. However, aquaculture is foreign to what we have done in livestock or agriculture. Because on earth we have not only domesticated some animals, but have launched gigantic bioengineering projects, to the point of completely changing ecosystems. For example, in the plains of the US: we have eliminated all herbivores with buffalo, we have eliminated the grass and the forest there, as well as the inhabitants who lived there. We have sowed corn and soy and ready. And in Europe, the same. By way of comparison, it would be the same to do in the sea: Take the entire Gulf of Bizkaia to grow algae or salmon, such as soybeans or cows on the ground, eliminating all predators and herbivores. It has never been thought of this type of bioengineering projects facing the sea, but we have done it on the ground.”

The Nine Borders of the Planet

Ten years ago, Johan Rockström and his companions identified the borders of the planet in the journal Nature. These are nine limits that, according to the researchers, if they were overcome, we would be crossing the same global sustainability limit of our planet: climate change, acidification of the oceans, global use of fresh water, reduction of stratospheric ozone, cycles of nitrogen and phosphorus, land use, loss of biodiversity, load of atmospheric aerosols and chemical pollution. Crossing these limits, we would overcome the self-regulatory capacity of the Earth. We have already exceeded four of these nine limits. 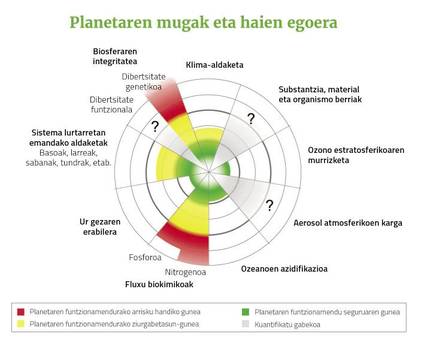 The loss of biodiversity is one of the phenomena that has accelerated enormously in Anthroprocene and one of the limits of global sustainability that we have overcome. Thus, consulted the main points of risk, Elosegi has it clear: “Are we losing biomass in the world? No. We are losing biodiversity. The total biomass is maintained, but this does not necessarily imply maintaining its functioning.”

The extinction ratio of species is currently between 100 and 1,000 times higher than that which can be considered natural. This has not been seen since the last global mass destruction, 65 million years ago. Scientists have warned that 30% of all species of mammals, birds and amphibians will be endangered in this century. In 50 years, terrestrial vertebrates will lose between 30 and 50% of their habitats, due to the way in which man uses the earth.

The loss of biodiversity, in addition to its intrinsic effects, can affect other limitations of the planet. For example, terrestrial and aquatic ecosystems can make them more vulnerable to climate change and ocean acidification.

“We always think we have not yet reached the limit of that sustainability, but we are not only on the border, but we have spent a lot of time on that border. What can we do to go back?”, asks Elosegi.

Epeld says we should reduce the use of herbicides in agriculture. “When in the 1960s we started using chemical fertilizers and pesticides, the increase in production was spectacular, but it caused ecosystem degradation. We cannot continue like this. Measures must be taken to protect wildlife.”

“It should give us what to think whenever we say we need more agriculture, especially when the irrigated plan is again being questioned,” says Elosegi. See what part of the total biomass is in the lands we exploit, what part of the total fauna is our livestock and what part of the fauna we make. When a species of great biomass suffers a small change in its way of life, its consequences are terrible on a global level. Imagine now if they start eating more meat in Asia or China…”

Irigoien added that “we should contribute economic value to biodiversity and pay for its deterioration. The advanced countries have caused the decline of biodiversity, we have enriched ourselves on the road, we have only put cows and chickens, and so we live in great. We have had no cost. But now we want others to keep biodiversity. Maintain in Africa and South America the mammals and forests that we ourselves have eliminated.” 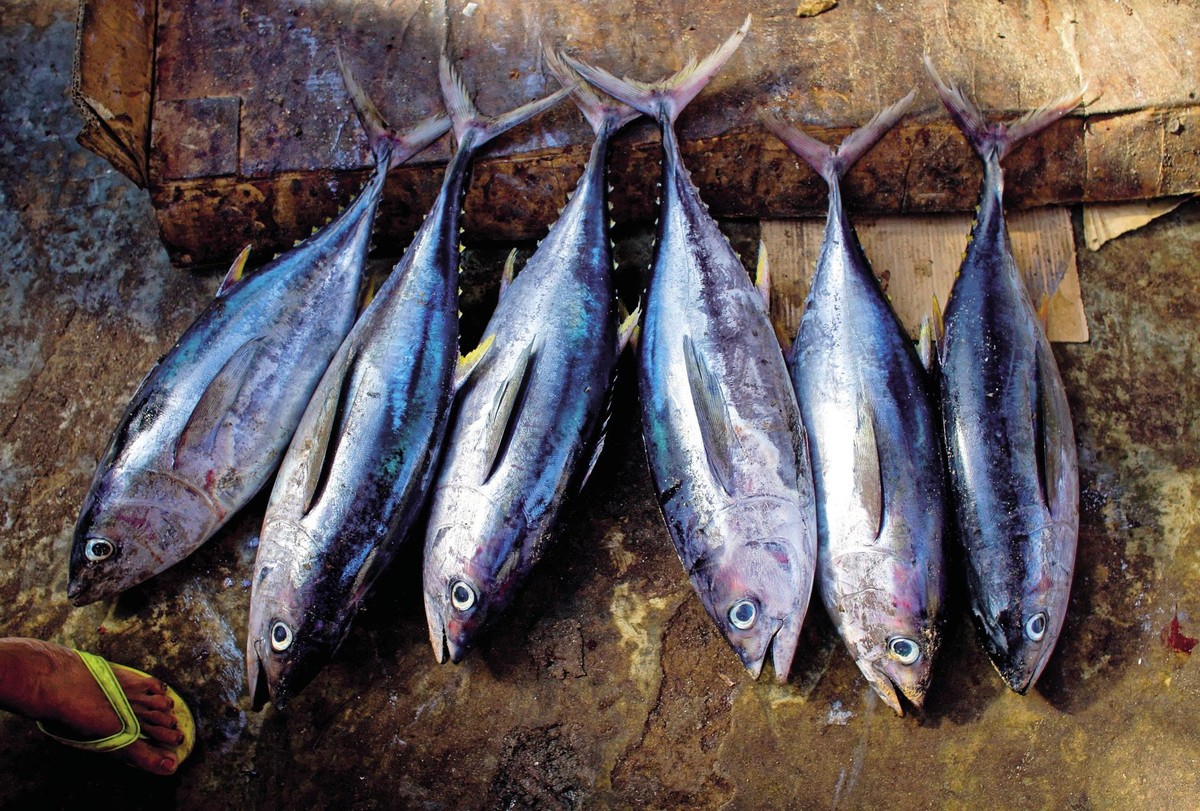 The sea is a difficult medium for the human being, with only 1% of the biomass. However, with 30% of the biomass of all animals, the sea has great potential for human feeding. ED. : Pixabay.

To create protected spaces of the wild life and to face the degradation of the soil, one of the alternatives could be a less exploitation of the land and a greater exploitation of the sea, to the extent that the exploitation is not so aggressive. In fact, although marine biomass is low compared to terrestrial biomass, it has great potential for human feeding: fish represent 30% of the biomass of all animals.

“Can the sea be a real alternative? Well, salmon aquaculture is not a real solution to feed 11,000 million people. It is too expensive. Therefore, I am not sure — says Irigoien, thoughtful. It would propose another more useful way, the aquaculture of filtering. Breeding of mussels, for example. It can be a production of less impact. They would feed on phytoplankton that occurs so quickly at sea; we should not use thought. Because today we need small fish to grow, and if not, soy, worse. In short, the land must be exploited to feed the fish.”

In any case, Irigoien shows pessimistic: “In short, the problem is that we do not want to change our lifestyle. We do not want to renounce anything. I don’t know if that is compatible with the care of the biosphere.”

Elosegi has also looked at another conflicting point: “Biomass data show that humans are too many and that we have to start very seriously controlling the human population. That is the real challenge. I find it very curious to hear that the main problem in Euskal Herria or in Europe is the decline in birth. Where is the problem?”

Lur Epeld also believes that we are too much. “Yes, reducing the human population is the most direct thing that can be done to solve the problem. But trying to do so can generate many conflicts. Who will not be allowed to be children?”