A bacteria visible to the naked eye has been identified.

A bacteria visible to the naked eye has been identified in Caribbean mangroves. Ed. Video image of the Joint Genome Institute of the U.S. Department of Energy. Videographer: Mas

The largest bacterium ever known in Caribbean mangroves has been identified. It's one centimeter, which means it's visible to the naked eye. It's 50 times larger than the other known giant bacteria, and in some ways, it's questioned some aspects that were considered essential to bacteria.

Scientists considered that the size of the bacteria had physical limitations. However, the bacteria they now describe exceed these limits thanks to a particular internal organization. It's called Thiomargarita Magnifica and it's a fil shape.

Faced with the Eurkaryotes, the prokaryotes, and within them, the bacteria, have no nucleus. I mean, they don't have a specific structure of DNA storage. T. magnifica does not have a nucleus like the Eurkaryotes either, but its genetic material is collected by a membrane that may be its antecedent. In addition, it contains numerous copies of this genetic material: Over 700,000. According to researchers, studying the bacteria will help understand why eukaryotic genomes have become larger and larger.

It is part of the group of bacteria able to metabolize sulfur and the dialogued parts have metabolic functions. According to researchers, the magnificent T. overrides the idea that bacteria are simple and complex eurariotes. Article published in the journal Science. 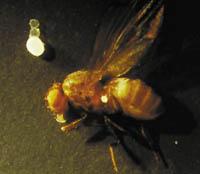