All eyes on the James Webb telescope 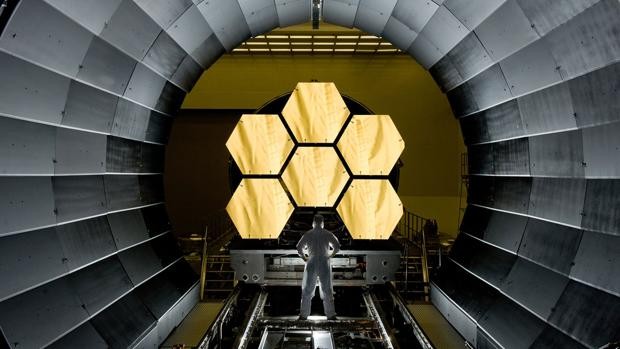 After 25 years of development, and 20 times the initial budget, the James Webb telescope (JWST) is ready to launch into space. Their expectations are very high and they expect him to be able to detect the first stars and galaxies that formed.

To do so, you must first pull and then get well to your place. And it's not easy. To begin with, they had to pull December 24 from Guyana, but as they announce bad weather, they delayed the launch at least one day.

After launch you have a 29-day trip to your L2 point. At this point the gravity of the Earth and the Sun resembles and the orbit balances. In the meantime, it should launch 178 mechanisms and conduct 344 operations. Everyone must do well for the mission to succeed.

One of the most critical is the extension of the heat shield or parasol. Its mission is to protect the telescope from light and solar radiation. It has five layers of a synthetic material called Kaplon, and while the outside will be at 85 degrees Celsius, the inside will be at -233 degrees Celsius. In fact, James Webb is an infrared telescope that detects very cold objects. So you need low temperatures to work properly. It has not been done so far, so there is a lot of expectation. Also with other complex operations such as placing the second mirror.

Once in your destination you will begin the tests. For 5 months it will be confirmed that everything works properly. And by the sixth month of its launch, it will begin with scientific work. They expect astromas and fans from around the world.