When it comes to the media, the news has been revealed as something rare and strange. What does not know much about bees will be, of course, surprised to hear that bees have diseases.

Of course, bees are also born, live and die, and the reason for their death is not just the one who has eaten a spider or bird. They have few diseases caused by bees, mites, amoebas, bacteria or viruses. Like bees, other insects will also have diseases, but until our economic interests touch (for good or for evil) we will not make big goats.

Barroasis is a new disease that arrives or is about to arrive. Being new generates fear, because we are not used to it, and it would be good that we were well informed before that saying does not happen: What he does not know is like the blind.

Where the barroasis comes from

From Asia to Europe, from France to Catalonia, from Catalonia to Spain and from Spain to Euskal Herria. The path traveled here.

Acaro that produces barroasis ( Varroa jacobsoni Oud. It was first described by Oudemanns in 1904 on the Java island being found in the Apis cerana of it. In this bee it was not so harmful. Later, in the 1950s, when in Russia, Japan and China the common bee Apis mellifica was introduced, from our species, it passed to it and with it it it went to Europe.

In Europe it was detected in 1976 in Romania, Yugoslavia and Federal Germany; in 1980 in Austria; in 1982 in Italy and France; in 1983 it spread throughout Eastern France and soon reached Nor-Catalunya. It has been incorporated to Sur-Catalunya in December 1985, Girona, and in August 1986 important outbreaks appear in Spain: Toledo, Cuenca, Ciudad Real and Albacete, as well as Alicante de Valencia. October in Almería, Jaén and Granada. 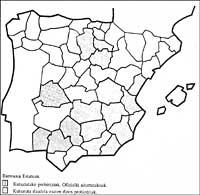 The reason to appear in places so far away in such a short time is found in the transhumance, that is, that this situation is because in a place where there is a disease they have been temporarily taken to the bees, to which the disease has been trapped and to which they move it without control.

Since then and here the contaminated bees have appeared in more places and today we can see this map that is terrifying, although it surely has to mark other Spanish provinces.

It has reached Alava and its presence in the south of Navarre would be the most normal, since Valencian beekeepers bring them every year to rowers and almonds.

How the baroque lived the mite

The mud is an mite, a tree, so it belongs to the kind of spider. It has eight legs and measures 1.1 x 1.5 mm, is reddish brown. Males are much smaller than females and are reddish.

When the mud reaches a beehive, it is inserted into a long table that is missing two days of operculation and stays inside when they operate it. At 60 hours after surgery, he will put his first egg and descendants every 30 hours.

From the first egg the female will be born, from the second the male and from the next the females. The male, once copulated, dies. 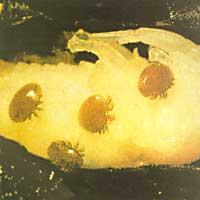 Four females of mud in the operculum of a bee nymph.
I.X.I.

These puppies born on larvae or nymphs will live absorbing their hemolinfo or blood. They prefer the birding nests to those of the workers, since being more birch can find more food. In the nest of the queen there are no mites, if the information is not very high.

The mud will not leave the table until the minor bee breaks the operculum and leaves. Then the mite will come out and go on another bee or on a larva of another table to be operated.

Once she has gone out of the inert, she also attacks the adult bees, pasting them at the time of drinking and absorbing blood. The color of the mite is very similar to that of the bee and when it is placed in the lower part of the belly of the bee, perforating the tear or soft membrane between the segments, it is completely mimicked and it is difficult to see it at first sight.

When the infestation is large, adult bees become very nervous when trying to remove the mugs from your body. In this situation they stop working and the dynamics, the work and the organization of the hive is broken.

Symptoms of the disease

A bee affected by this disease is not noticed at first sight at all relevant, two years after the introduction of the disease, but it is reinforced inside the hive and by the time it is noticed can be late. 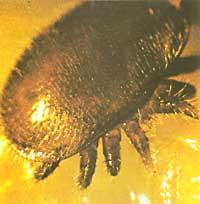 Adult female of the baroque, with 4 pairs of legs.

After these two years the following symptoms may appear:

The bee, the whole colony, begins to weaken and will probably die for the fourth year. Where does that weakening come from? The mud absorbs the hemolinfo or blood of the bee, which causes a weakness of the bee. If the flies begin to weaken, the whole colony begins to weaken. In addition, from the wounds caused by the mite, other diseases can be introduced worsening the situation.

Therefore, on the one hand the bees are weak and at birth less new, the bee will lose. It must be taken into account that when the disease takes a lot of force, the queen is also attacked by her and is not left alone making eggs.

Attention to these symptoms can be too late and the most appropriate is early diagnosis. And if there is more than 20% of a contaminated beehive, it is not worth going into any treatment and it is better to burn it in the fire.

We will cite four ways for a good and rapid diagnosis:

We introduce 100-300 bees in a white pot and pour the boiling water and remove it in 5-10 minutes, the mites go to the bottom and there can be seen. Put in alcohol between 100 and 300 live bees and shake the container for 2-3 minutes. Filter in a fine mesh of 2.5 mm grid and observe the filter in a white background container. White paper with vaseline or greased and placed on the base or background inside the hive. Close all holes and grooves well and turn on with a caressed inside. Keep a half hour closed and then observe that greased paper to see if a barrel appears. Place for two months a plastic sheet protected by a mesh inside the hive on the bottom. During these two months of wintering, the mite should be seen between the garbage removed from the espadrilles if it were in that hive.

Treatment against the disease

It is not easy to fight against the baroque. On the one hand, because the pile is protected in the operculates and on the other, because before certain treatments the bee itself would be lost. 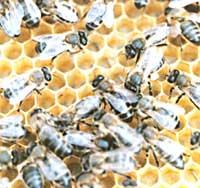 It is not possible to disappear from any of the nations that have introduced mud so far, and with an annual treatment they manage not to take strength and thus become accustomed to living with it.

When the Baroque appears in a region, it is convenient for everyone to do so. Otherwise, one opens what removes the other.

Treatment with Folbex VA is the only treatment recognized in the Spanish state. It belongs to Ciba-Geigy and its active ingredient is bromopropilate. Taktic, of the Boehringer House, is registered in Spain against parasitosis of cow, pork and goats. Amitraza has the active principle. It has long been used in other nations against barroasis. Petricin, of the House Bayer, with the principle of caumaphos, is used jointly with the following two in other European nations. Clartan, with fluvalinate and marketed by Sandoz. He is still in experimentation.

Treatment should be done outside the time of honey, preferably in times when there are no children or babies. Above we have said that the mite reproduces in the operculated cells. If we treat it with the operating room, the product we introduce will not hurt you. It is convenient that all the mugs are out of the stack.

There are also some attempts to reach the mite with bee food, that is, mixed in an acaricide syrup, which is delivered to the bee and goes to the blood of it; when the Mite absorbs blood to the bee, the mite is made with the acaricide, which dies abandoned. It would be a good way for the beekeeper, without hardening the bee by smoke and without the tiredness that entomado supposes.

To pass the mud from one bee to another, the healthy person must be in contact with the sick person, or spread it when the bee is in the same place where he has been ill. The mud does not fly and only walks from one side to the other.

In fact, barroasis can reach an extension of 3-5 km/year, driven by sick bees or hives. If your body had mites, it would reproduce in the new hive. 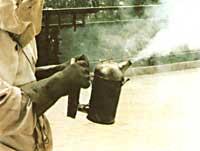 But if the reason were only this natural diffusion, we could be quiet for many years, perhaps because it had not yet reached Germany. However, the man has extended it by dragging and bringing the bees. Transhumanity is, in short, the reason for this rapid expansion.

In order not to enter the regions that we still do not have Baroque, we must take some precautions. Some examples are:

Beehives, materials or products from any place declared as barroasis without severe controls will not be provided. Through the transhumance, we ask those who come to our region a sanitary guide. The Associations of Beekeepers are also interested in this campaign and anyone who does not comply with this norm should denounce it. Every year, all beekeepers must request the Administration to review our bees and treatment in case of finding them sick. The healthy presence of the bee should not be attended only by the beekeeper, but indirectly the benefit that the bee contributes to the whole of the agriculture is superapícola.

In this sense our Deputations have begun to carry out some detection campaigns, but we are still far from knowing the reality of our provinces. This campaign needs more money and human resources so that the rain does not surprise us.