The bones of the whale as a road 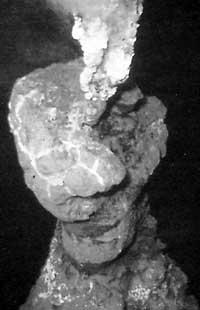 Japanese researchers discover how life is transmitted to great depths at the bottom of the sea.

Japanese researchers have discovered how life is transmitted from one to the other in hydrothermal springs located at the bottom of the sea to great depths. Around these chimneys, which expel hot water and metal sulphies, live abundant animal communities.

These small ecosystems or oasis are characterized by not taking advantage of the energy of the Sun. In fact, their giant worms, molluscs and crustaceans feed on their bacterial flora. These chemotrophic bacteria use the energy released in the degradation of sulfurated hydrogen to synthesize organic molecules.

But, how do they colonize the surroundings of these fountains located hundreds of kilometers between themselves in the sand? They would travel in the bones of the whales and other cetaceans located at the bottom of the sea. To verify this hypothesis, cow bones have been placed in the sand. These bones have first fed the aerobic bacteria of sediments.

Then came other aquatic bacteria that produce sulfurated hydrogen in metabolism. In this way the bacteria of the ecosystems or oasis have been offered the necessary energy and within a year the cow bones were colonized by chemotrophic bacteria and crabs from hydrothermal sources.