Formerly biological weapons captivated the military. During the classical era and during Roman domination, the troops had specialized people to poison the waters of the taps and to introduce in some villages containers contaminated with laws, plagues and anger.

XVIII and XIX. For centuries European settlers began to use this type of weapons in order to destroy the native inhabitants of other continents, since the intentional introduction or not of diseases such as syphilis, flu, navarrería or tyfus was more effective than steel or gunpowder. 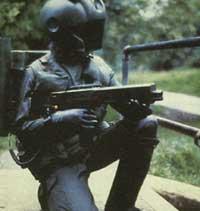 I. Consequence of the massive use of chemical weapons in the World War, II. Biological weapons were tested during the World War. It is known that the British army launched a large number of spores of the bacillus antrax on an empty Scottish island, known as Gruinard. The success was enormous and still in 1989 the soldiers of the British army moved in protective suits to avoid the infectious forest and the deadly disease.

In 1940 and 1944 the Japanese bombed 11 cities in the campaign against Korea and Manchuria with materials contaminated by typhus and plagues. The number of deaths from these biological weapons has never been known.

In the concentration camps of prisoners of war, the Japanese injected 3,000 Chinese, Mongolian, British and Korean prisoners with infectious diseases. At least 1,000 prisoners died in these trials.

II. After the World War, in the 1950s and 1960s, the U.S. government built a military laboratory in the state of Marylan. Called Fort Detrick. At the best time of its development, 1,000 scientists worked on biological weapons research.

However, at the end of 1969 this US project was paralyzed and in 1970 Nixon declared that the government did not intend to investigate biological weapons for offensive purposes. Two years later, in 1972, the “International Agreement on Biological Weapons” was signed in London, Moscow and Washington, which prevented the development, manufacture and collection of biological weapons for offensive purposes.

Currently 130 states have signed this agreement. So at the beginning of the last decade it seemed that the world did not have to worry about such weapons. The governments of the United States and the Soviet Union decided to stop funding for such weapons, as biological weapons are less useful than atomic and chemical weapons. These weapons could act against the aggressors, posing the same problem they had in ancient times, which meant the use of numerous vaccines in the armies.

The military could not imagine that a year after the signing of the treaty there would be a revaluation of biological weapons.

In 1973, biologists Stanley Cohen and Herbert Boyer succeeded in transferring genes from other bacteria into material inheritance.

What happened in the security mechanism that protects the material heritage of living beings meant revitalizing biological weapons research. If obtaining and using the first pathogens was a great care, from that moment on they could be redesigned adapting to military needs.

With the new techniques of genetic recombination, the Pentagon military had thousands of possibilities that they could not imagine two years earlier. It is observed that the interest of recombined biological weapons increases with the budgets of the 1980s.

From 1980 to 1987, the Pentagon has increased its investments in research and production of biological and chemical weapons by 554%, investing 1.440 million dollars in these projects. In 1986, 90 million dollars have been used in biological weapons research and the number of genetic manipulation projects funded by the Minister of Defense has gone from 0 in 1980 to 200 in 1987. In the early 1980s the Fort Detrick facility was renovated and scientists resumed its activity.

In case of defence, limited production of biological weapons is permitted. And here we have the uncertainty of the agreement, which is very difficult, especially at the military level, to know exactly the difference between attack and defense. The people who use these weapons of attack need vaccines, that is, it requires prior protection of such attacks and, therefore, the creation of new vaccines. Genetically recombined pathogens can be obtained for a few months and vaccine generation can be, if necessary, a work of years. 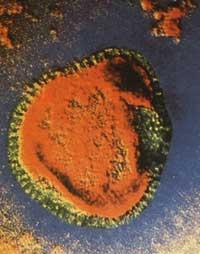 Influenza virus. One that can be used for military purposes.

How would these weapons be? What are its consequences? Some scientists who have worked on these projects, such as Dr. Michael Brende, professor of molecular biology at the University of San Diego, say: “Escherichia coli, harmless intestinal bacteria, can become a genetically recombined terrifying weapon.

In the beginning, this bacterium becomes an unpolluting antibiotic through resistance genes, to subsequently increase resistance to intestinal acids to move freely through the digestive system. Genes from other organisms (for example, a toxin that prevents blood clotting) may also be applied. Finally, it can be recombined with an attack gene and the bacteria radiate to other cells of the organism through the intestinal wall. The bacteria thus recombined can expel their toxins in the cellular fibers without the body’s defensive system being able to act.”

All that Dr. Brende says is not science fiction, but a common practice in the world of genetic engineering.

At the moment, technicians working in the military field in the United States have managed to sequence and encode some biological poisons. The genetic structures of autraxa, botulism, cholera, diphtheria, tetanus and some poisonous toxin snakes are known. Knowing the genetic sequences means that at any time scientists can get a huge amount of poisons and cheap.

The Fort Detrick USAMRIID project has begun to apply serpent poison genes to the DNA of an E-type colibacteria. Of course, the official attitude of these studies (trying to create new vaccines) is based on medical goals. Studies by irony of several soldiers III. He says that they are made thinking about the health of the peoples of the world: “In countries where 40,000 people die with snakebite, our vaccines can be very interesting.”

Looking for synthetic poisonous substances, they work at Fort Detrick. For example, it is intended to synthesize the poison of a fungus called tricotezene (called yellow rain, which is 300 times more effective than conventional chemical gases that attack the central nervous system).

The Pentagon has spent 113 million dollars sequencing the gene encoding the enzyme acetylcholmesterase. This enzyme is important for regulating the role of brain neurotransmitters. According to some reports from the Stockholm Peace Research Institute, this knowledge can be used to obtain certain toxins that attack nerve centers.

Most say that toxins are biological weapons that can be genetically recombined, since production is very economical and simple using genetic engineering.

In addition, these weapons are very manageable and easy to produce. American and European scientists say: “The state that wants to get recombined biological weapons has 200 specimens and a normal laboratory full of genetic technology, materials and original crops. The rest of things, that is, transportation, aerosols, filling the attic of explosives… can be done with the same military infrastructure used for chemical weapons.”

As for the application, the military believes that aerosol is the best means to spread biological weapons among the public. Starting in 1984 in a U.S. city, specifically in Dugway, the army wants to build a US$2.3 billion aerosol spread plant.

We know that a small crop is enough for people in the villages to get sick with autrax, that fever and plague. However, these diseases are known and there might be something to do, but if viruses and bacteria were genetically recombined, there would be nothing because official medicine has no experience in this regard.

Other Risks of Biological Weapons

Military and politicians assure you that these weapons will never be used to attack, but to maintain peace. However, for people living around laboratories, research on these weapons can pose a huge risk. And their transports.

In the city of Birmingham it would never have happened. Professor of Biology at the University of Birmingham, Henri Bedson, had a laboratory on the first floor of an old university building, where there were also more university facilities.

In 1978 he investigated with some collaborators the Navarrese virus. Several weeks after the manipulation of the virus, a young woman from the city fell ill with a serious Navarro; Janet Parker. When Janet learned that she worked as a photographer at the Anatomy Institute of the Faculty of Medicine, the young woman entered the hospital where Bedson worked, she was surprised, as the Institute was located above her laboratory.

On September 11, 1978 Janet Parker died in Navarre and two days before Dr. Bedson committed suicide by cutting his throat with scissors cutting the grass.

A few weeks later, the university's technicians analyzed how Janet's contamination occurred and concluded that the virus had risen to the upper foot by a small, narrow airway from the adjoining room in which Janet worked. Dr. Bedson's laboratory stated that it did not meet 100% of WHO safety standards.

The Parker-Bedson event is a proof of the risks posed by microorganism research and especially in Europe, since the Defense Ministers of some countries have commissioned university laboratories to research genetic engineering projects. Although the safety measures implemented by Asilomar in laboratories where genetic manipulation of microorganisms is carried out are stricter than those of conventional laboratories, in recent years most laboratories (private or public, working in genetic engineering) are discarding many of these rigorous measures. Now many genetic manipulations are carried out in multinationals and semi-conventional laboratories.

In September 1981, 213 liters of the Chikungunya virus disappeared from the Fort Detrick and so many weapons disappeared to make everyone sick with tropical fever. The Pentagon still does not know what happened to this dangerous weapon.

As we have seen, genetic engineering techniques are not only used in the field of medicine, but also for military purposes. They are able to undo millions of people in a short space of time. We could say that we are in the age of genetic engineering, because for the military it is very attractive to create germs against peoples with vaccines.

Both biological weapons and nuclear power can pollute the environment used for many years. Biological weapons are very attractive because, without changing the infrastructure of the people, like neutron bombs, only people die. In addition, if the aggressor is vaccinated against the pest, it can overcome biological contamination.

Therefore, it is estimated that biological weapons research laboratories will grow. 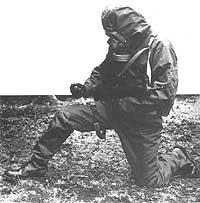