Wine, fruit of knowledge and balance

The complexity of winemaking is reflected in a broad descriptive vocabulary. But the production of all these types of wine is never based on chance. Despite the multiple factors influencing the wine sector, professionals know what, when and how it affects wine. Another question is, however, how many of these factors depend on them.

We start from the vine 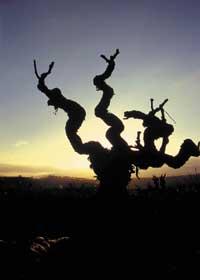 The long process of wine production begins with grape production. Therefore, first of all, the winemaker must choose the grape species, the vineyard area, the treatments he will perform and the day of the harvest. In fact, the characteristics of the grape and therefore of the wine vary according to the climatology, the composition of the earth, the diseases, etc.

In Europe only fifty varieties of Vitis vinifera are used in oenology. Among them are Hondarrabi zuri, tempranillo, garnacha, mazuela, graciano…

In general, the ideal temperature for the vine is 10-25ºC. From 28ºC the leaves are marched and at less than 10ºC the vine dies. Temperature affects colouring matter and the amount of acids and sugars.

In addition, according to winemaker Talai Berri, Itziar Eizagirre, “hail and heavy rains destroy the branches of the vine and the plant takes two or three years to heal. Therefore, although this year’s rainy summer has not been very good, it hasn’t rained much and it hasn’t been too bad.”

However, when humidity is excessive, pests and diseases increase and, therefore, the headaches of producers and agronomists. Among the viruses, bacteria and fungi that attack the vine, we must highlight the one that had influence so far on the map of the wine: the grape louse or Filoxera.

In Europe some fifty varieties of Vitis vinifera are used to produce wine. In the image, a vineyard of Irulegi.
Wines from H. Garaizabal

The grape louse is an insect of less than a millimeter, native American. In Europe, in 1863 the first consequences of the presence of grape louse and the XIX were detected. By the end of the 20th century it had destroyed two-thirds of the strains of the European continent.

However, numerous studies conducted around this insect have shown that Filoxera does not destroy the roots or leaves of the American mahatsondo. Therefore, to face Filoxera, just introduce the European vine into the roots of the American mahatsondo. Among the diseases that relieve phylloxera and that currently give more work to oenologists are mildiu (red) and oidium (white). Plasmopara viticola and uncila necator are fungal diseases that are faced with copper and sulfur chemicals. The treatments should be done as soon as the presence of the fungus is noticed and are of great help not to waste time the pink plants that are planted around the vine. The fungi, before attacking the vine, produce spots on the pink plant, so the vine is treated as soon as these spots are seen. 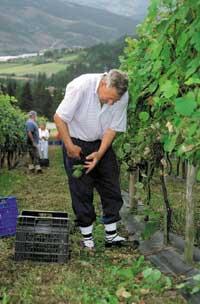 The date of grape collection depends on the wine to be produced.
Wines from H. Garaizabal

But taking good care of the vineyard would be useless work if the grapes did not join at a good point of maturity. The winemaker will decide the date of collection depending on the wine you want to make. For the preparation of txakoli, for example, Itziar Eizagirre points out that the grapes are collected in the first two weeks of October. On the contrary, it will join later to get a colorful and alcoholic red.

For the elaboration of the declared txakoli of Getaria are collected 13,000 kilos of grapes per hectare, which means approximately 13,000 bottles. For the production of La Rioja wine, not half are collected per hectare.

Without human intervention, the inevitable future of grape juice would be nothing more than vinegar. Therefore, wine producers have an obligation to control and balance chemical reactions that, through physical and chemical manipulations, shake grape juice.

Alcoholic fermentation is the first process of wine production from the juice or must of the grape. It is a biochemical process in which must sugars degrade and transform by action of yeast enzymes to become ethyl alcohol and carbon dioxide. For this reaction to occur it is essential that the grape juice is within a temperature range. For example, a temperature between 22 and 28 °C is suitable for obtaining red wine, while a temperature of 16-18ºC is sufficient for making white wine.

Although the grapes have natural yeasts on their surface, the most commonly used yeasts are the varieties of Saccharomyces cerevisiae, selected in laboratory depending on their effectiveness.

Treatment of vines to protect against mildew and oidium diseases.
Wines from H. Garaizabal

But in alcoholic fermentation, in addition to ethyl alcohol, many other products are synthesized, such as malic acid. The latter, due to its acidity, is considered as a mistake in winemaking. To correct the error, malolactic fermentation turns it into lactic acid.

Red wines are fermented almost systematically. On the contrary, in white wines, malolactic fermentation is performed according to the desired result. Depending on this, an arid white wine is made fresh or white that is aged well.

In addition, to increase the wine graduation you can add sucrose to the must. This work is called chaptalization. It is an authorized but regulated technique since 1972. However, sucrose breaks down in 48 hours, making it difficult to control.

Weighing the grapes to make txakoli. With 13,000 kilos of grapes some 13,000 bottles are made.
Wines from H. Garaizabal

Finally, the use of sulfur dioxide cannot be avoided in human intervention. This is one of the products that makes and preserves antiseptic wine. Yeasts suitable to improve the work, help the residual cleaning of white wines, control the temperature of the fermentation, improve when the grapes arrive damaged, increase the color in the fermentation of red wines, etc. is used.

The winemaker, in addition to measuring the influence of chemicals, must monitor the performance of mechanical operations closely related to the color of wine. These operations include the transfer, clarification and aging process in both barrel and bottle.

Grape juice or must from grapes.
Wines from H. Garaizabal

The substances that color the wine are the polyphenols found on the surface of the grape. Therefore, the winemaker who wants to make a white wine will soon separate the must from the skin of the grape. On the contrary, for the production of red wine, even after fermentation, it will be soaked with solid materials to remove more compounds from the skin and the seeds.

Subsequently, to avoid odors and diseases it is necessary to remove the particles that are at the bottom of the tank. For this purpose the wine is changed from one container to another. This operation, called tracing, allows to remove carbon dioxide from the tank and ventilate the wine. 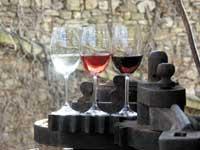 The substances that color the wine are the polyphenols found on the surface of the grape.
Wines from H. Garaizabal

There are two other ways to lighten the color of the wine: spin or filter the liquid. Centrifuge is a method too hard and is not used in quality wines. Filtration is also used in quality wines, but those contrary to this method claim that materials that positively or negatively affect the conservation of wine are eliminated without distinction.

Once these operations have been carried out, the winemaker will transfer the healing of the wine to his own tank and later to the cork of the bottle. Over time, the color and aromas of wine change.

Marriage between wood and wine XVI. is estimated to be at the end of the century. At that time more and more wine was exported to America, but the containers of mud and leather were not suitable for it, so they began to be made of wood. They realized that wood changes the texture, smell and taste of the precious drink.

In the Cuba a wine of great quantity of tannins is introduced, that is, it has been in prolonged contact with solid materías.
Wines from H. Garaizabal

In any case, it must be specified that you cannot enter any wine in the tank. In fact, the main reaction that occurs in the tank is that of tannin and oxygen, so a wine rich in tannins is introduced, that is, in prolonged contact with solid materials. In addition, tannin will be supplied by the tank itself.

According to Itziar Eizagirre, “polyphenols, including tannin, are the main compounds of wine. Tannin gives color to the wine, but its flavor is very acidic, so it is necessary to have it in the barrels. In fact, the oxygen that enters through the pores of the barrel reacts with the tannin until it calms the wine and stabilizes the color”.

The older the tank, the smaller its porosity and, once covered all the pores (about 6 years), no change in wine will occur.

Currently only three species of oak are used for barrels and the wine ageing process: European Quercus pedunculata and Quercus sessilis and American Quercus alba. 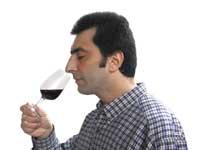 To prevent the color of the wine from looking good and changing temperature, the tastings are made in a glass cup.
Wines from H. Garaizabal

Quercus pedunculata, produced mainly in the French region of Limousin, has a large amount of porous wood and tannin. For its part, Quercus sessilis is a softer wood species that slowly releases tannin. American oak Quercus alba has more acidic aromas and has less tannins than the other two. Once decided by the winemaker, the wine will be introduced into the bottles and, until the consumer opens it, the cork will influence the wine. Its main function will be to avoid the entry of oxygen into the bottle to prevent the wine from getting older and sick. In fact, although microoxygenation is good for the aging process of wine, excess oxygen may be the biggest wine disorder.

Therefore, the oenologist has finished his work and has come the turn of expert and not so expert tasters. 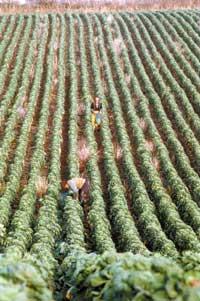 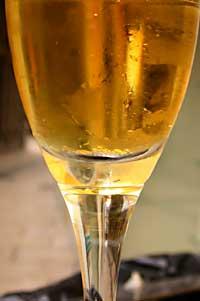