A Soviet station in Antarctica heads to the sea on an iceberg. The Druzhanaya station was empty when the slide began, but last December a group of scientists had to go to work on it taking advantage of the beginning of the Antarctic summer. The Iceberg has also carried to his back the station "General Belgrano", ceded by the Argentines. 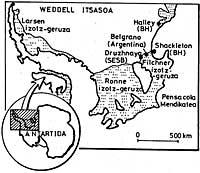 The Soviet station was built in 1975, near the seashore on the large Filchner ice sheet. 130 people used as a base during the summer to conduct geological studies in the nearby mountain ranges of Pensacola and Shackleton.

The breakage of the freezing layer was first detected by the NOAA-9 satellite on January 3, 1986. Now there are three parts, each of which is twice the size of Gipuzkoa.

The release of the big icebergs is a surprising but well-known phenomenon. What just happened was expected 30 years ago, but it was not known when it was going to happen. What was not expected was that Larsen's 6000 km2 of ice would also be released. Considering the thickness of the ice sheets, all the detached ice contains 6000 km3 of water. That is, three times the annual average ice loss of Antarctica.