The rocket #KZJaia2 started on April 28 and until we landed on June 20, we traveled through the space of astrous scientific culture. Stars, asteroids, satellites… we have taken the opportunity to learn every stop and spread the scientific culture, following the path started six months ago with the first festival. During the 54 days of travel we received 54 contributions.

--> Compilation of 54 contributions from #KZJaia2

We cannot say that we have maintained the frantic pace of that first edition, since in 83 days 120 contributions were made (an average of 1.4 per day). But it is not wrong to match the day. And it has become clear that, despite having gone through the beginning, the project remains firm and we firmly maintain our willingness to work for the dissemination of scientific culture. 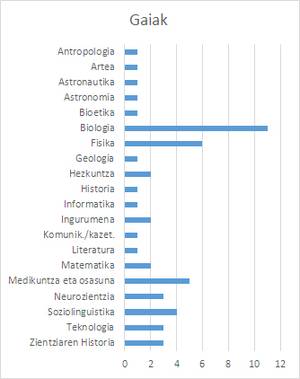 Almost all contributions have been published on weekdays, especially the first three days of the week, among which Tuesdays have been favorites. Almost all of them have been texts, usually illustrated, but there have also been photo galleries, videos and audios. As for the themes, they have been varied, from art to the history of science, to a total of 20 disciplines. Among them is Biology (11 contributions), followed by Physics (6) and Medicine and Health (5). The same trend is maintained as in the 1st festival.

Among the participants we have had everything, young students, teachers, researchers… Among the students the youngest have been those of 4th ESO, in addition to those of Baccalaureate and the University. Professionals have also been from different fields: journalists, scientific disseminators, linguists, biologists, chemists…

Contributions have been published in 17 spaces. In this case, most of the spaces have received various contributions, including blogs Dena and Zientzia Kaiera, which have made 10 contributions. And special mention to the blog Galtzadaberri, which was created under the excuse of this act, on the occasion of the beginning of the 1st festival, and which has remained firm with 4 contributions from the students of the Colegio San Ignacio de San Sebastián.

If the festival of scientific culture has any strength, it certainly has it on social networks. That is precisely the natural place of this event. All contributions have been disseminated via Twitter and Facebook. Each post published in the KZJaia Public Group has been visited by an average of 35 people, and on Twitter has been touched on almost a thousand occasions (965) the hashtag #KZJaia2 during these two months. 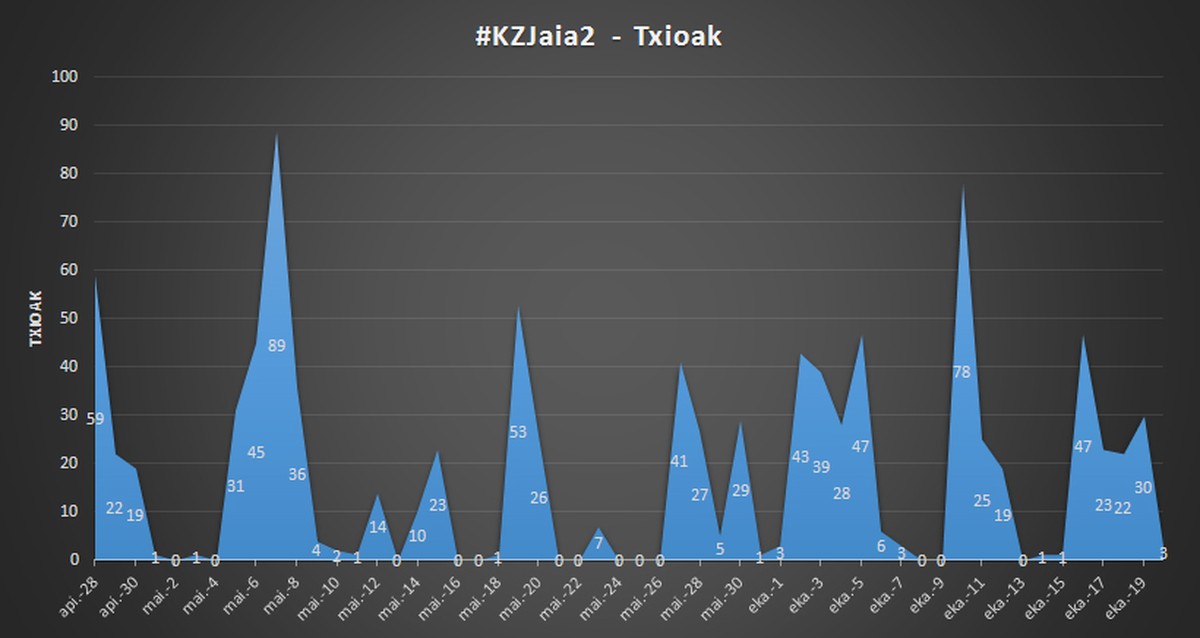 This social media movement is probably the one that has the most impact on this initiative. And thanks to this we achieved the goal of spreading scientific culture. Due to the Twitter movement, the autopilot of Sustatu Internet Albistegia has captured 24 out of 54 contributions, 44%.

On the other hand, analyzing the trends of Umap, which measures the activity in Basque on Twitter, it is observed that of the 54 days that the festival has lasted, 24 of them were one of the most quoted topics among the Basques. In fact, in 15 days he was among the 10 most Chioqueros and in 6 days among the 5 most txikis. The best place in the ranking was reached the day with the highest number of contributions (5), on May 7: It was theme 2 most played.

The #KZJaia2 rocket is already on Earth and we can proudly say that the mission has become very well accomplished. We have participated in the network and shared 20 posts, articles, audio or videos from different disciplines; 54 contributions in 54 days. In this way, we have expanded knowledge, recognition and interest in scientific culture through the Internet. We have strengthened the collaboration and network of agents working in scientific culture in Basque. And above all we have enjoyed the scientific culture.

For Zientzia.net it has been an honor and a pleasure to host the #KZJaia2 festival. And now the witness will gladly pass to #KZJaia3. But we will be clear after the summer!

--> Compilation of 54 contributions from #KZJaia2