10. It is based on the scientific method

To develop critical thinking it is necessary to know what is the SCIENTIFIC METHOD and the steps that this method has. So let's slowly see what the scientific method is.

Therefore, the scientific method is a set of techniques and procedures that help us advance knowledge, based on two fundamental pillars: repeatability (anyone with the necessary training and instruments can repeat observation or experiment) and falsification (our theories or hypotheses must predict results that, otherwise, would be denied).

As we have said, the scientific method is composed of several steps.

Question: The first step of the scientific method is to ask a question about what you want to know. Questions can arise from the observation of a natural phenomenon, the need to solve a problem or an unexpected discovery. In addition, new knowledge derived from other research, ideas exchanged with other scientists and reading scientific articles can generate new questions, thus building the basis for new research.

Observation (Documentation): Analysis of reality and knowledge of what you want to know, in order to understand something. The most common thing is to look for bibliography on the subject to be investigated. It is very important to carry out a thorough analysis to know the research that has been carried out around the subject and avoid unnecessary work.

Hypothesis: It is an idea that is proposed to explain what one wants to understand. The idea must be formalized in a well-founded hypothesis in order to be confirmed/cancelled experimentally effectively, since a bad hypothesis can mean a bad experimental design.

Results analysis: The data obtained in the experiments must be analyzed to group, visualize and quantify the results. This allows debating the results and inferring evidence-based conclusions. To carry out a thorough analysis of the results it is necessary to use the statistics.

Conclusions: The conclusions, based on the theory resulting from the analysis of the results obtained, serve to accept, transform or reject our hypothesis. If the research results match the hypothesis, we will move on to the next step. If the conclusions do not confirm the hypothesis, it should be reconsidered.

With the new hypothesis, a new experimentation must be designed and carried out, the results are reviewed, and conclusions that confirm the second hypothesis can be inferred.

Socialization of generated knowledge: If the knowledge generated is not socialized, it is useless. Scientific knowledge is constructed through the communication of the results obtained and must be done accurately and reliably. Research results are published through articles from scientific journals. All articles go through a valuation method in which expert scientists in the field evaluate the vulnerabilities of the article and suggest their acceptance, review or rejection.

So important is the socialization of scientific knowledge, which is mentioned in Article 27 of the Universal Declaration of Human Rights adopted by the United Nations General Assembly on December 10, 1948 at the Palais Chaillot in Paris, France.

“Everyone has the right to participate freely in the cultural events of the community, to enjoy artistic works and to participate in scientific progress and the advantages that derive from it”

The following figure shows a diagram of the steps that are followed in the scientific method: 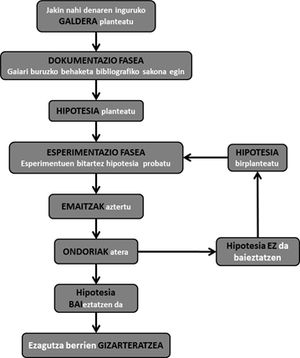 An example of scientific method: The vaccine by Edward Jenner and Baztanga.

In Jenner's time, smallpox was a very dangerous disease for humans, causing death to a high percentage of people infected with the virus. In addition, the survivors were left forever with the scars of the wounds caused by the disease, causing in the most serious cases blindness.

However, smallpox from cows was a mild disease that could infect humans from animals. It was common for cowboy workers, touching the wounds of the udders of the affected cows, to get infected with the smallpox of the animals. But when this type of contagion occurred, the sick were quickly cured and did not become so easily infected with human smallpox. Based on what was previously seen by other physicians, Jenner's work was instrumental in understanding the disease inoculation procedure and its successful application and developing the smallpox vaccine. Jener's steps in applying the scientific method were:

Observation: They observed that among workers who were infected with marginally ill animals in dairy farms, the effect of human smallpox was less, so they consulted information on previous work.

Results Analysis: As Jenner advanced, James did not develop human smallpox either in this test or in other subsequent tests to test immunity. Jenner repeated the experiment with many other people and confirmed the repeatability of his experiment.

Socialization of generated knowledge: In 1798 he published in a book all his research on smallpox and in the following two years published the results of other experiments stating his theory that smallpox cows protected against human smallpox.

As is the case today, at the time of Jenner there was also an anti-vaccine movement and there were movements against the smallpox vaccine he found. The members of these movements said that vaccinated people would develop the characteristics of cows, but they did not use the scientific method to make these claims and could not demonstrate what they said with evidence-based reasons.

The following figure shows the figure of the British satirist James Gillray to caricature the controversy caused by the smallpox movement (The Cow Pock or The Wonderful Effects of the New Inoculation (James Gillray, 1802). 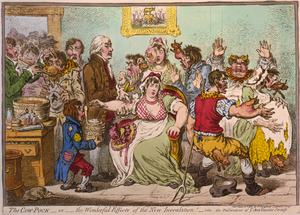 The cartoon published by Gillray in The Punch magazine in 1802 depicts a scene to inoculate Jener's vaccine at Saint Pancras Hospital in London. In the center of the image appears Jenner vaccinating a woman sitting. On the right appear vaccinated people who are removing parts of the cows in the body.

The scientific method is used to create new knowledge, but it can also serve to solve problems or doubts of our day to day and often we use it unconsciously. The following paragraph presents a situation that can occur to anyone at any time:

“You have heard that the case of covid-19 has gone up in Euskal Herria and, wanting to see the latest news that will be given on Teleberri, as soon as you enter the remote control button at home and have turned on the television. However, television does not turn on. How would you apply the scientific method to know what happens?

The scientific method is also very useful for the development of critical thinking; many times we use it as a tool to analyze whether an information that comes to us is credible or not.