The Elhuyar Foundation has organized two activities within the Science Week. On the one hand, the results of the study “Treatment of Science and Technology in the daily press” have been presented and on the other, the prizes of the young inventors competition Teknoskopioa have been presented. Both activities were held at the headquarters of the Elhuyar Foundation and were attended by people related to science, technology and education.

In the center, Jon Barrutia, Deputy Minister of Universities and Research of the Basque Government.
(Photo: N. Goizueta)

Jon Barrutia, Deputy Minister of Universities and Research of the Basque Government and Julián Florez, Director of the VICOMTech technology center, among others, attended the events. To begin with, the general director of the Elhuyar Foundation, Itziar Nogeras, has read a kind of story. Through it, Elhuyar has captured his work in scientific outreach.

Then take the word Jon Barrutia, highlighting the change experienced in recent decades: “ten years ago only twenty theses were read a year in the ACBC and currently read one a day”. He thanked Elhuyar for his efforts in scientific outreach and said that institutions are increasingly involved in scientific outreach.

One of the examples of this commitment is the research "The treatment of Science and Technology news in the daily press", which has been carried out by the Basque Government. For the second consecutive year, Leire Latierro has compiled, analyzed and classified scientific and technological news published for six months in different newspapers. The researcher himself has explained the results and the main conclusions.

Among others, it highlights the increase in the number of news in these areas compared to the previous year. In addition, the news has appeared more dispersed than before in newspaper series, so the relationship that science and technology can have with any area of life is reflected in the press in an increasingly natural way.

But not all the results are so optimistic. In fact, this year has incorporated a novelty and has taken into account the degree of elaboration of the news. It follows that there is something to improve. 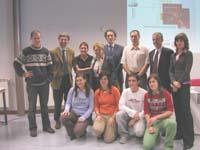 Winners of the competition together with the jury and the awards distributors.
Technical service

After the presentation the award ceremony for young inventors Teknoskopioa was held. The competition was aimed at students of Baccalaureate and Vocational Training and the students of the school El Regato de Barakaldo have been the winners.

The jury has awarded the work “Ikasmesa digital” presented by Paula Arana, Jone Miren Miguel, Amaia Santamaría and Asier de Diego. The contest, sponsored by Fagor Appliances and VICOMTech, has made it possible for the winners to receive their iPod. As could not be otherwise, young people have achieved these awards with satisfaction, and thanks to their joy, Elhuyar's act in Science Week has concluded with hope.