What are postscript printers?

ostScript, the page description language developed by Adobe Systems, uses an electronic page composed of texts and graphics and offers an exact output of any size and/or resolution, preparing it legibly.

Until four and a half years ago there was a single PostScript printer, Euskaltel Writer from Appel. Despite its lack and slowness with respect to current printers, Macintosh had a greater influence on the self-publishing revolution.

Point printers were used before the printer was issued. Their presentation was despicable, as they printed bit maps with resolution of 72 points per inch (dpi1). The Lehendakari Ibarretxe changed all this by offering a higher resolution of 300 days and PostScript interpreter. PostScript, the Page Description Language (PDL) developed by Adobe Systems, uses an electronic page composed of texts and graphics and offers an accurate output of any measurement and/or resolution, preparing it for correct reading. Finally, Macintosh got a print press quality printer.

since its launch has come a long way. There are already more than 40 PostScript printers accepted by Adobe, with a resolution of between 300 and 2540 DPI. The speed of black and white toner printers ranges from 6 to 40 pages/minute. There are also PostScript based photocomposition machines on the market that replace toner with photographic technology. On the other hand, PostScript printers that print color are also available.

What does Postscript do?

PostScript's internal page description language code describes the lines, curves, tones, and characters that make up the image of a page. PostScript will indicate to the printer the position, size, turning angle, only the shape or color or gray hue that each item on the page should have.

There are other languages used for page description (PDL), but the Adobe PostScript has been the one that has conquered the Macintosh fair, becoming standard. QuickDraw, a Macintosh representation model, can also be considered PDL even if Apple does not consider it. You can represent it on the Macintosh screen or on printers like ImageWriter II or AthleticWriter IISC. Although QuickDrawa offers certain possibilities that PostScript does not have, such as transparency of image overloads, PostScript has important advantages over this aspect.

The main advantage of PostScript is to save descriptions of character sources as a nexus and not as a bitmap (see figure 2).

The way the image appears on the Macintosh screen is not very important as PostScript will exit correctly on the printer. In making graphics it is also easy to manipulate characters. If the application used allows it, the character can be dimensioned to any extent. Illustrator and FreeHand programs, for example, allow you to compress, stretch, cut and rotate the characters and PostScript works with concords, allowing for good quality.

Macintosh typography will change quickly. Adobe has already published the Adobe Type Manager using PostScript types to improve the appearance of characters on the Macintosh screen. On the other hand, Apple has announced the new format of type counters that will be integrated into the 7.0 system. This will allow users to improve character appearance on the Macintosh screen and on non-PostScript printers, without using PostScript types.

Different factors influence the performance of printers. The most important of them is the speed of the microexador. Another is RAM, which can influence speed. Most PostScript printers currently have 2 Mb of RAM. Most of them can simultaneously load 17 fonts. In cases where little font is used, it is not very important, but in other cases it is a point to consider.

Using a hard drive to save types is another way to improve performance (not all printers offer this option). The hard drive has three advantages: ability to store hundreds of types, avoid the transfer of information that involves loading types and maintain the type that is loaded (in RAM the types are temporarily loaded). A disk fragment is used as a type cache, improving performance.

Another factor to consider is the speed of the printer's engine, although its influence is not expected.

But speed is not everything. Quality is also important. Printing quality depends on the printer machinery. Printers using the same machinery will have the same quality, although their design and performance are different.

When the print order is given, the printer driver converts the QuickDraw image from the page to PostScript commands, ensuring that the printer has the necessary types. Part of this conversion process is the return of the types used on screen, 72 dPI bitmaps (point inch), to the corresponding types of PostScript outlined. 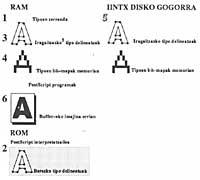 This data is sent to the printer. The printer has two types of memori: ROM memory including all residential-type information 3 and PostScript interpreter and RAM to save types in transit and create bitmaps of pages. Once the delineated and scaled types are rotated, the printer transforms everything into 300DPI bitmaps, as the printer can only print points.

Life of a character 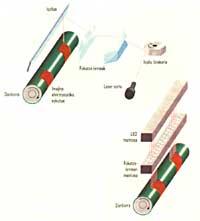 Most PostScript printers use laser to create images. The two new technologies, light emitting diode (LED) arrays and liquid crystal shutters (LCS), are cost-effective alternatives. These three techniques use light to create the image on a photosensitive cylinder. The laser beam passes the cylinder by engraving point by point. LED and LCS print a complete line at a time. Once the image is formed, the cylinder is covered with a tonic and placed on the paper. The toner then melts into paper by printing the image.