On January 17, 1955, in the North American city of Groton (Connectituc), a dive was embarked at 11 a.m. Diving was towed for several miles to the height of the Long Island Sound, where the first atomic propulsion trial began. 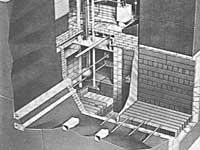 Scheme of the nuclear reactor used in ships.

On January 17, 1955, in the North American city of Groton (Connectituc), a dive was embarked at 11 a.m. Diving was towed for several miles to the height of the Long Island Sound, where the first atomic propulsion trial began. That day was undoubtedly born a new era of maritime navigation.

The divers, who bore the name of Nautilus, began to be built in the shipyard in July 1952. In January 1954 they were wetted for the first time in marine waters.

The North American army wanted to experience this diving, so it had another classic engine next to nuclear propulsion. But even though Nautilus had two engines (classic and nuclear), it was faster and better for work than normal diving. Without leaving the underground for two years, Nautilus toured a total of 69.139 miles without changing fuel. The fuel was the piece of uranium from the tamino of a pelotite.

In reality it cannot be said that diving had an atomic engine. Atomic energy does not directly affect the propeller. What happened in Nautilus was that the atomic reactor produced heat and heated the water maintained at high pressure. This hot water then caused the turbines and then the propellers.

Although the use of nuclear propulsion at sea for the first time in diving seems surprising, we must not forget the influence of the military on these problems and the need for diving to occasionally breathe to the surface. In times of war, therefore, it is important that the military remain at the bottom of the sea without outcropping diving.

After the success of the Nautilus in the United States, the construction of atomic submarines began. In 1958 he had already embarked eight atomic diving and had planned to make eight or ten new each year. 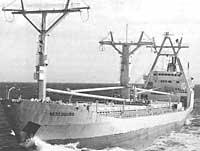 At that time, the Soviet Union itself announced the existence of atomic diving, while at the same time it began to navigate in the North Sea the first atomic ship of the surface: The Lenin, a ship of thaw.

For their part, atomic submarinisms have caused serious headaches to the military. How to detect a diving that circulates to more than 400 meters of depth, without periscope and that does not reach the surface? In addition it does not emit noise and instead of sonar they have a much more difficult lowfar to detect.

In this sense, atomic divers are not detectable by aircraft, and surface fleets can also be very scarce. For this reason, at one point, helicopters have been used with special appliances that are standing in the air. Also diving against diving.

Although diving has so far been closely linked to military objectives, it seems that they will begin to be used for oil transport. According to the technicians, diving groups would be created for the underwater transport of oil. Only one of the divers of these sets could have sailors, while the rest would be remote controlled boats.

But in addition to this specific case, the rest of the shops have also obtained great advantages. The atomic propulsion engines are lighter to the same power as normal engines. They say at least some calculations to transatlantic France. This transatlantic was equipped with a conventional motor of 8000 tons, with tanks of 8000 tons of fuel. Had it had atomic propulsion, the weight of the machine and fuel would always have been 10000 tons and could have transported 2800 passengers instead of 2000.

However, the atomic propulsion is expensive and in the private shipyards there are difficulties when placing the commercial ships. 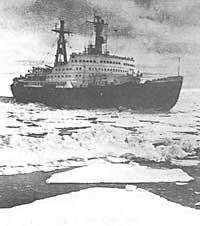 However, the atomic propulsion of submarines has increased considerably in recent years. Nautilus achieved great success by crossing the North Pole below, which encouraged the authorities (and the military). The Nautilus, in the Pacific, left Portland, crossed the North Pole under the ice sheet and reached New York through the Atlantic Ocean. Six days in eleven hours and forty-five minutes, he made a journey of 3150 miles. Another dream written by Julio Verne was made a reality.

However, atomic submarines can be used for more terrifying purposes. Today, these divers carry nuclear missiles, which can launch their incredible weapons from any point of the sea. For this reason, these divers would be elements to break our world in case of atomic war. The atomic weapons built for military purposes are for this purpose.

Figure . Scheme of the nuclear reactor used in ships. image. Lenin, Soviet atomic ship of thaw. image. First atomic trade, called Savannah. It was founded in 1959 and started working in 1962.