The UEU of Pamplona ends this year

In the second half of last July the EU held its usual event in Pamplona. It was the seventeenth edition of the EU. Immersed in the heavy heat of July, about 600 people have participated in 22 courses. Our intention is to bring to these pages what has been done in the areas of science (chemistry, physics, natural sciences, computer science, medicine and agriculture). We don't want to do an in-depth study. It is not our intention, but to mention some significant points.

Elh.- With us we have the biologist Arturo Elosegi. The first week of the EU has taught in the afternoons a course on river ecology. What have you explained these days?

A.Elosegi.- The course on river ecology has been taught in five days. On the first day we saw the abiotic part of the river, physical-chemical characteristics. Above all, how they will adjust the behavior of living beings that inhabit them. On the second day we have seen what are the main living beings of the river. On the third day we were more directly involved in the issue of ecology, in the study of transport and energy and material flows, in relation to the processes involved (biotics and abiotic). On the fourth day we have seen how rivers vary over time, how floods have affected and how rivers recover. Finally, we have analyzed the human influence on the river. Normally this effect is negative. Therefore, we have also analyzed what human beings can do to solve pollution problems.

A.Elosegi.- I think it is obvious. Most of our rivers are currently eutrophized by their surplus of organic matter. On the other hand, urban and industrial pollution is very high and serious. Clean rivers are scarce and their disappearance is also observed every day.

Elh.- Is eutrophication the most serious problem?

A.Elosegi- I think so. Keep in mind that in our country there are many people scattered, in the hamlets, and it reaches all places. Streams are scarce and a purification plant cannot be installed at all points. Therefore, agricultural waste containing a lot of organic matter goes directly to the river.

Apart from this, in urban areas chemical pollution can be very important. This occurs in the low course of rivers.

Elh.- What can we do to clean the rivers?

A.Elosegi.- In theory many things can be done. There are many water treatment systems. There are many ways of debugging. It is currently possible to eliminate virtually any type of contamination. But because these are costly processes, often the use depends on the political will.

We know what can be done for a long time. The problem is who drives it.

Among the activities of the Department of Physics was dedicated a whole day to the scientific and technological research that is carried out in Euskal Herria. It brought together researchers working at the university and in research centers, each exposing their activity in public. In addition and as a culmination of the day a round table was organized open to all members of the EU under the title “Research in the Basque Country”.

From this point we will mention the most interesting aspects that were said in this round table.

For Joseba Jauregizar we are not so well. Still the researchers and technicians, the technicians who will work in the companies, are not enough and new ones must be formed.

According to José Mari Rodríguez, there is everything in Basque research, as the “medicine cabinet” said. In his opinion, the main problem, and in that he agreed with the Jauregizar, is that there are not many people of one level. He stressed that the lack of tradition in the field of research in Euskal Herria has been enormous and that tradition cannot be achieved in seven or eight years. Pedro Etxabe explained with data the situation of Basque research. He cited two indicators: which part of the gross domestic product is used in research and the number of engineers and technicians per 1,000 industrial workers.

Etxabe stressed that the data of Euskal Herria coincide more or less with those of the State.

Antxon Santamaría believes that the research carried out in the Basque Country in general is inferior to that of the most developed villages in the area.

José Mari Rodríguez denounced the policy being carried out in several companies. Since R&D is fashionable, many companies have organized a department with this name, but there are no investigations or developments. Being a R&D department is a good demand for the company. José Mari believes that they are montages made for statistics.

All the participants agreed that Basque companies are little researchers and that the research carried out in the Basque Country is carried out mainly in entities related to the administration. Research in companies in developed countries has more weight than among us. As an example, Antxon Santamaría highlighted that 90% of semiconductor research in the US is conducted in private industry.

Manu Barandiaran said that research is spending money because it is fashionable, but he did not see clearly whether it has been distributed correctly. As an example, he mentioned that at the university money has been spent on the acquisition of a complex and sophisticated tool, but that very little has been spent on hiring technical personnel (not researchers) who manipulate and care for these tools, which is atypical compared to other European universities.

Jauregizar stressed that 3,000 new technicians are needed in Euskal Herria and that they must be formed. Rodriguez told him that it is very difficult because technological studies are not fashionable and that it is easier to get sociologists, pedagogues, etc. In Rodríguez's opinion, being a technician is against the social trend. Jauregizar insisted that the technician who will work in the company has absolute priority. He said that society cannot spend much money on college to form philosophers and the like.

When basic research versus applied research was raised, Pedro Etxabe highlighted the need for basic research. It must be a complement to applied research. Mr. Rodriguez was of the same name, but commented that the problem may be how they integrate both. Who disagreed was Jauregizar. He opted for applied research. Antxon Santamaría pointed out that abroad much of basic research is carried out in companies and when you are studying literature, the example that the underlying mathematical model to explain a certain phenomenon has been elaborated by a type of company is not surprising.

According to Barandiaran, at least in the university the field of research should not be delimited. The initiative must be left to the researcher. In Antxon Santamaría's opinion, hardening can be harmful on some levels. However, he believes that it is necessary to differentiate between universities and research centers because funding and objectives are different.

In Rodríguez's opinion, good scientists must be brought from outside to make relatively long stays between us.

At the end of the round table there was an interesting debate between diners and attendees.

The most interesting among the activities of the Department of Chemistry was the III Congress of Basque Chemical Researchers. Meeting. This meeting was attended by chemical researchers working in university centers and research centers in Euskal Herria and outside our country.

In the afternoon, everyone explained their work. The mode of appearance of the works was the poster. Each researcher described his work on posters glued to the wall. Subsequently, and depending on the interest of the people, he expanded and deepened the information on the posters. The 20 chemical researchers arrived in Pamplona followed with great interest the explanation of the posters. However, 30 different works were presented, although some of the authors could not approach Pamplona. 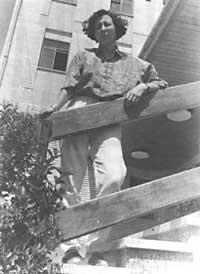