“When I me the opportunity to do the thesis, I didn’t think much” 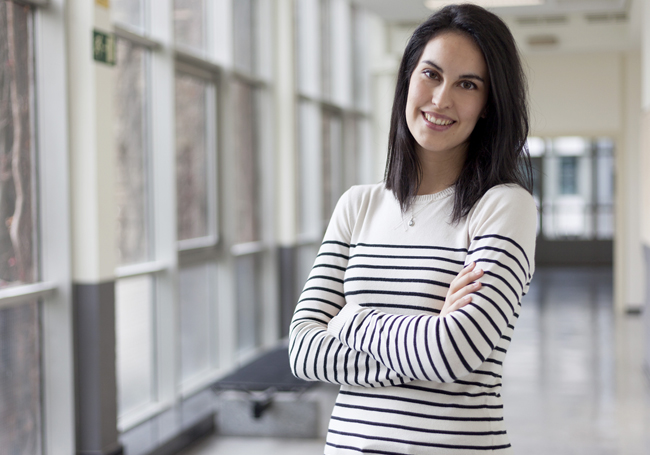 Itxaso Parola Domingo has enjoyed science since he was very young. He says that in high school he developed very well in mathematics, physics, etc. Therefore, when it came time to choose university studies, he had not too many doubts to access engineering: “I don’t like health sciences, I wanted something more technical. In the end I chose Telecommunications Engineering because it has everything: mathematics, physics, electronics, telematics, computing…”

His was the last promotion prior to the implementation of the Bologna plan. Remember that in the Basque branch they were very few, about 10 and in some years they were a single girl. “It is the same percentage that occurs between boys and girls in large engineering groups, but as we were so few, no other girl was adapted. Yes, I had no problem because I was the only one.”

In the last year he studied the subject of Optical Communications, which he found “quite interesting”. Thus, he requested that the final project be carried out in this field, specifically in the Applied Photonics group. “There I started with the project and I really liked it. So when I finished the project they gave me the opportunity to do the thesis, I didn’t think much.”

So he began to do the thesis. Now she has written the thesis and soon has her presentation. He is satisfied with the path taken, although he confesses that it is long and sometimes hard: “You finish the race and spend another three or four years with the thesis, while you see that your friends are already working and you are on a scholarship. But overall, the experience has been positive.”

With the intention of continuing to investigate

In his opinion, he has also been personally enriching: “On the one hand I have met many people and on the other I have learned to write articles, to give lectures, etc.”

From the research point of view, he considers that he has acquired extensive experience, especially in the field of Photonics. In fact, it has achieved a new polymer doped optical fiber that acts as a luminescent solar concentrator, cheap and efficient.

He considers a hopeful result and would like to continue with it, “if it is not in Bilbao, elsewhere”. In fact, he believes that the optical fiber he has developed can have a future, “but to continue researching we must get funding.” You have the possibility to go to Braunschweig University (project developed in collaboration with them), but it would only be for nine months and prefer to look at other options. “In any case, I would like to continue investigating in this field,” he said.

Itxaso Parola was born in Plentzia in 1991. He studied telecommunications engineering and is currently completing his doctoral thesis in Photonics at the Bilbao School of Engineering at UPV. In his thesis he studied special polymer optical fibers for applications as a solar concentrator. He has conducted two research stays at the Technical University Braunschweig in Germany.