Teknopolis is 10 years old this year. And on the current television scene, ten years is almost a century! That is why Teknopolis will celebrate it. The old suit will change and appear again on TV, not because the old was bad, but because to be alive it is necessary to change it from time to time. The program we produce at the Elhuyar Foundation will be renewed on October 14 in the two ETB chains.
Teknopolis completely new
01/10/2007 | Kortabarria Olabarria, Beñardo | Elhuyar Zientzia Komunikazioa 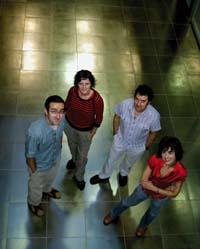 Among novelties, the new leader. Journalist Maider Egüés will tackle science and technology issues in Teknopolis this year. While in endless ETB reps it has appeared linked to travel programs, the arrasatearra will already complete the third season in Teknopolis.

In the direction of the program, for the moment, there are no novelties; one more act will continue Beñar Kortabarria. To work with him, a team made up of people with less experience and experience: veterans Arantxa Txintxurreta and biologists Eneko Imaz; beginners from Teknopolis, journalist Alaitz Ochoa de Erive and engineer Manex Urruzola.

The novelties will not only be produced in the work team, but there are also novelties in the aesthetics and contents of the program. After several seasons outside the ETB stages, this year the program will return to the studies of Miramón. The recordings will therefore be made in the hostel, with the guarantee of image and sound quality that this implies. The complete aesthetics of the program, not the style, is new.

In the contents of the program, the most significant change is the monographic themes, the programs based on a single theme. This aims to give way to a greater deepening of the themes, allowing for possible visions on them. In addition to the deepening of the themes, Teknopolis also aims to be visible to the viewer, and to this responds the new chapter called "A spectacular world". In a video of 3-4 minutes each week will show different curious places around the world.

In addition to surprising the viewer, you can become a participant through the weekly "Viewer's Question". And if you want to increase your participation, on the Internet, in the new website of the program, the possibilities of interactivity will increase. And… all the changes to enjoy at home from day 14. Happy!