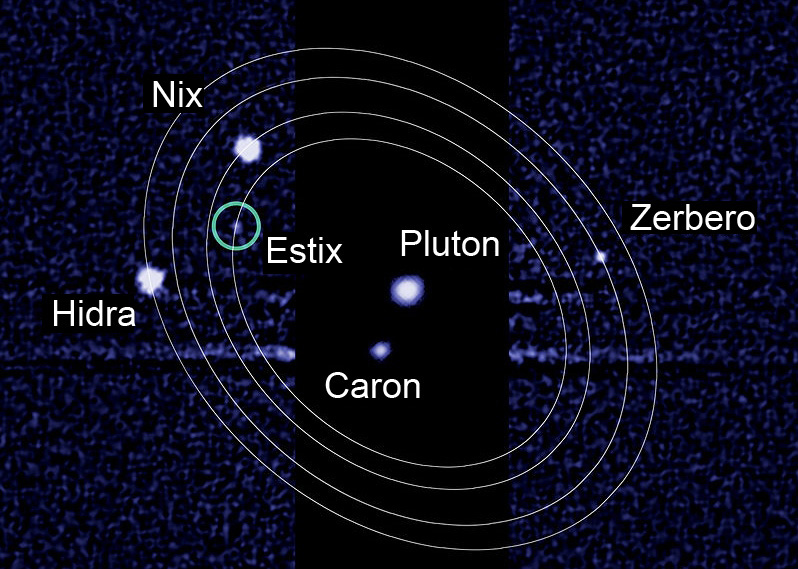 Image taken in 2012 by the Huble Space Telescope. Drawing the orbits of the four small moons. Ed. NASA, ESA, and L. Frattare (STScI)

They have drawn new conclusions about the four small moons of Pluto, based on images taken by the Hubble Space Telescope. Estix, Nix, the dynamics of Zerbero and Hidra and their physical characteristics have been analyzed in a paper published today in Nature.

Around the binary system formed by the dwarf planet Pluto and its biggest moon, Caron, there are four other small moons. The four have been found in the last decade and we know little about them. In 2005 Nix and Hidra were found, in 2011 Zerbero and in 2012 Estix, the smallest of all. They are all much smaller than in Charon: The mass percentage of Caron is 11% in Pluto and that of the other four is equal or less than 0.001%.

Now, analyzing all the images obtained by the Hubble Space Telescope on these four moons, M has drawn several conclusions. R. R. Showalter and D. P. P. US researchers Hamilton. For example, the results suggest that the orbits of the Estix, Nix and Hydra moons are united (through the so-called Laplac resonance). On the other hand, Nix and Hydra have come to the conclusion that they are ellipsoid and move in a completely chaotic way. This is because they are found in a field of gravity in continuous change. In fact, the turn of Pluto and Karon over the same centre of gravity makes the field of gravity around them variable.

On the other hand, the surfaces of the moons are different. Nix and Hydra are quite bright as Karon. Zerbero seems to be a black sheep of the family, as dark as coal. For astronomers it is surprising that in a system of these characteristics there are so many lights.

Soon we will have more information about Pluto and its moons. NASA's New Horizons probe heads to Pluto. It will pass by Pluto on July 14 and the images taken at the end of April (below) show that, in addition to Pluto and Karon, it already has views of the four small moons. “Pluto will continue to give surprises when he passes New Horizons in July,” said Showalter at the press conference given today by the NASA-Working with the Hublle telescope is nothing more than an advance of what awaits us.”