Computers in the simulation service

Scientists need models to be able to demonstrate their theories and engineers also to develop their designs. Lately they simulate models with the help of computers. They demand increasingly powerful computers to make simulation more like reality.

Modeling is representing the behavior of real phenomena as a theoretical or mathematical expression. The resolution of this statement simulates the natural behavior of reality.

Numerical sensations are often more appropriate than physical experiments to test ideas and we must not forget that supercomputers have an enormous capacity to solve complex problems.

Therefore, computers are very suitable for use in simulations, but especially in the following cases:

The Mazda house computer simulates the dynamic behaviour of the car.

Of course, a large capacity computer is expensive. It may cost twenty million dollars, but researchers can put their problems through fluid dynamics (F.D.O.) The tool is cost-effective when solved. FDO simulates the behavior of fluids (gases or liquids), numerically solving the basic equations of fluid movement.

The physical processes present in fluid behavior occur at a very low scale or level. Therefore, the FDO divides the fluid area into thousands of small computable cells and solves the equations of each cell. When deciding the number of cells different factors are taken into account: the phenomenon studied, the complexity of the geometry of the phenomenon, the necessary precision, the memory capacity of the computer, the speed of resolution of calculations, etc.

The precise description of the natural phenomenon requires a three-dimensional simulation in which the action of physical behavior in the three spatial directions is foreseen. This means that the main memory of the computer must be very large and that the calculation time is also long.

Two-dimensional simulation is less complex and can be performed faster. That is why it is often done as a first approach. However, when it comes to accurate calculations of complex geometry, only giant computers are able to perform simulation calculations at an acceptable speed. They are used to analyze the complex behavior of fluids during their design in automotive, naval and aviation. Companies like Jaguar in Britain, Mazda k in Japan or General Motors in the US are using these techniques to investigate the aerodynamic characteristics of their vehicles. These simulation studies aim to increase fuel performance, improve stability at high translation speeds, preserve safety and aesthetics, etc.

The first designers calculated the aerodynamics and stability of vehicles in wind tunnels. This takes a lot of time and the system is expensive due to the large facilities. On the contrary, the supercomputer with FDO software can do without this approach.

Through supercomputers, designers have great help in simulating aircraft aerodynamics. In this F-16A war plane, for example, you can see swirls of air in the wings.

It is very difficult to simulate the aerodynamics of the car. In fact, the geometry of the vehicle is complex and the three-dimensional air swirls. In addition, researchers must take into account the influence of pavement on any fluid simulation, which is very difficult to investigate experimentally.

According to calculations made with supercomputer, the results suggest that designers can reduce air resistance by improving the air current under the vehicle. It was also indicated that the movement of the pavement affects the stability of the vehicle. Researchers can simulate the behavior of fluids in three dimensions by using networks that contain millions of cells in their simulations, obtaining only the exact data of resistance and stability to the air.

The most common industrial application of FDO is aerodynamic research. Using state-of-the-art supercomputers, researchers can now simulate viscous fluids throughout the aircraft fuselage.

It is a problem to take into account in simulation using these computers. However, sometimes it is not the only factor. There are phenomena that take place on a very long time scale, and if that time is not summed up with a computer simulation, the researcher has no solution.

When simulating dynamic processes in the atmosphere (for example, in weather prediction), factors such as thermodynamics, humidity, continuity, hydrostatic, etc. must be taken into account. Researchers fragment the part of the space they want to study into thousands of cells that span horizontal networks and vertical layers.

The capacity of the current supercomputers allows to treat every fifteen minutes the small square cells of a hundred kilometers of length and a kilometer of height. These physical processes of time can also be studied in restricted areas on a smaller scale, based on submodels.

In the numerical simulation of time there can be two different objectives:

Meteorologists have begun using climate modules to study the influence of human activity on climate: acid rain, nuclear wind, greenhouse effects, etc. To simulate these phenomena, supercomputers need a lot of time, even if they are of great capacity.

Computer simulation is also very suitable for the exploitation of oil and gas reserves. In the simplest cases, the reserves have different layers of constant permeability. Other times the characteristics vary from block to block. The normal procedure is to inject gas, water or water and detergent into the reserve under pressure to facilitate the release of oil. All this can be simulated by computer for a few hours.

In the industrial and technical world there are more and more applications to computer simulation. And no wonder. Just look at the advances that computers have made in the attached box. 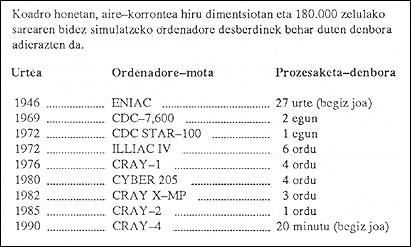