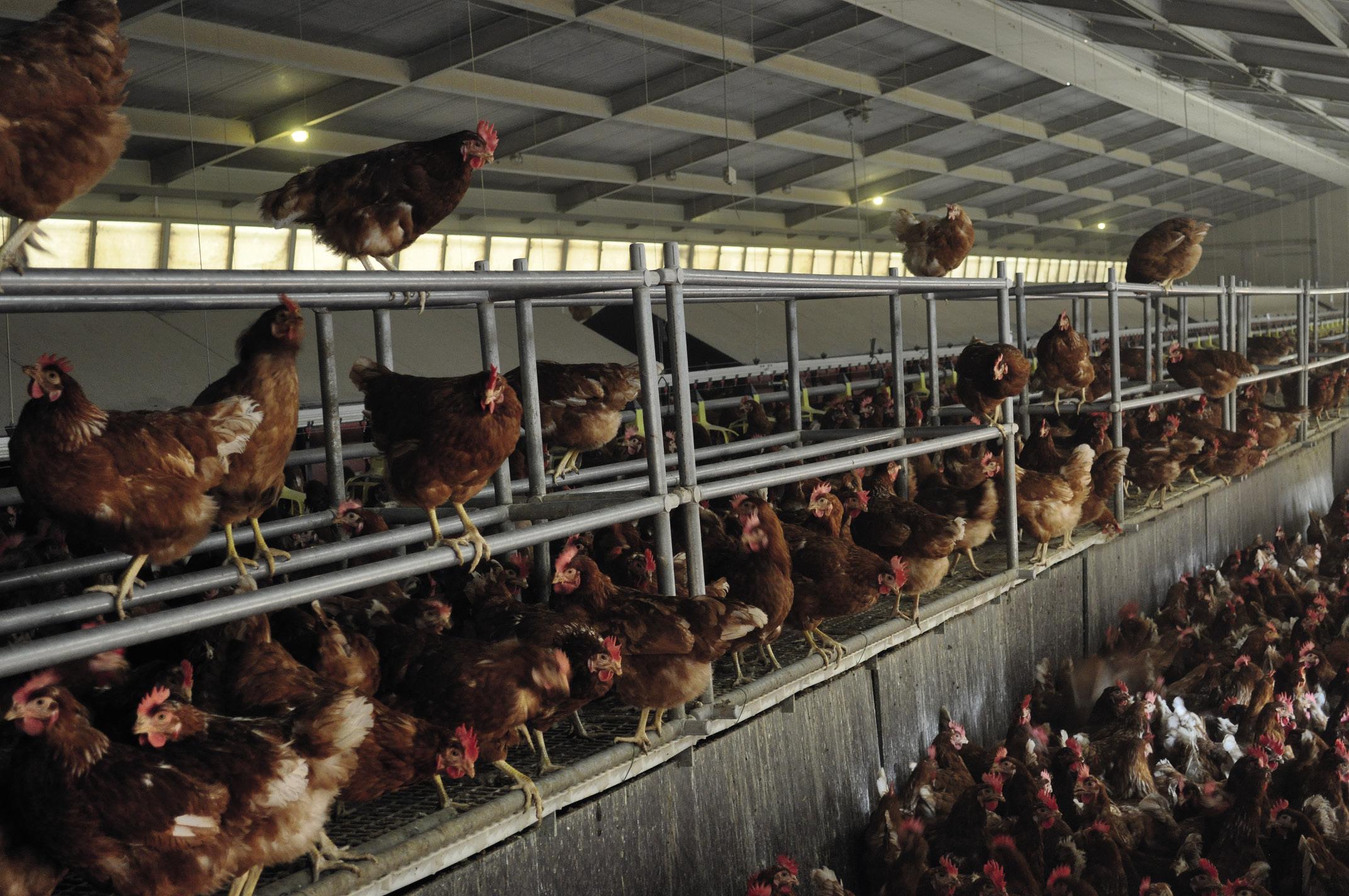 Figure . In the production hens the density and quantity of hens is usually high. ED. : Ane Rodríguez.

Over the years it has been considered that the main reason for the hens (Gallus gallus gallus domesticus) to play aggressively with other hens could be the lack of space between them. Like humans, each chicken would have around it an area called “personal distance”, and if any other chicken entered it, it would attack this invasion (McBride, 1971).

Thus, in high-density chickens and number of chickens (producers), due to the lack of space, many chickens would be found within the “personal zone” of many other chickens, so it would often have to wait for a large number of attacks. However, it is not so.

Due to the losses of money caused by the attacks of chickens in the production hens, the cause of these attacks has long been investigated, and Hughes and Wood-Gush (1977) studied and concluded that there are more attacks in chickens with low density of chickens. Moreover, numerous studies carried out in productive conditions (figure 1) indicate that the number of attacks decreases when the density and number of chickens are greater (Estevez et al., 2003; Hughes et al., 1997; Nicol et al., 1999).

To explain the low incidence in areas of high density and number, several hypotheses have been proposed. However, to date, no one has investigated in what specific context these attacks occur between chickens.

In the case of the human species, if someone suddenly approaches us in the street, whatever their intention, we can consider it a threat or not. Even if it is in a millisecond, we study and evaluate his attitude to know the intention of what approaches us and, consequently, decide what our response will be.

Like humans, animals (including chickens) have the ability to analyze the attitude or behavior of the other chickens and to act according to what they conclude. In this sense, it is considered that the factors that provoke attacks in large groups of chickens are more complex than the invasion of the “personal distance”. 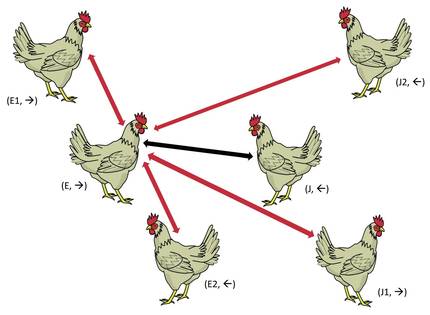 Figure . Outline of the data taken for each attack. Red arrows indicate the distance of each hen (J, E1, E2, J1, J2) from the attacker (E). The direction of the head depends on the attacker and the arrow in parentheses after the identity of the hen. ED. : Ane Rodríguez.

To check this hypothesis, we studied 60 attacks between chickens recorded in video for 24 weeks in two production chickens. In each case data were collected from the time before the aggression: behavior of the aggressor (E), the aggressor (J) and the two chickens closest to both (E1, E2 and J1, J2), location and sense of the head (Figure 2).

In order to collect data on the behavior of chickens, they have been classified as relaxed as possible to the most active. The most active behaviors require greater energy and effort, so they would pose a greater threat, while the most serious behaviors would not be considered threats. The location has been measured in XY coordinates to later calculate the distance between the chickens, and it has been studied if the head is in the same direction or in the opposite of the head of the aggressor and the classification has been done according to all this.

The results show that the distance between the agressor hens (E) and the attacker (J) is the same as the distance between the agresora hens (E) and the two nearby hens (E1 and E2). But the aggressor (J) is closer to the aggressor (E) than the two closest hens (J1 and J2). As for the direction of the head, the results show that the attacked hen (J) is normally oriented to the attacker, unlike the other chickens (E1, E2, J1 and J2). And what is more important, it has been proven that this agresora hen (J), in most cases, has more active behaviors than other chickens (E1, E2, J1 and J2) in the moments before the attack (Table 1).

As already mentioned, the high density and quantity of chickens does not mean that there are more attacks. According to Hughes and Wood-Gush (1977), at the time and at the place where chickens attack each other in conditions of adensity and large quantity, there are usually not many chickens. Therefore, the attacks between chickens do not occur because they are within the “personal distance” of another chicken, but because they enter that area.

McBride (1963,1971) claimed that chickens tend to avoid a direct look between them, interpreting this direct look as a threat. This data corresponds to our results, since most of the time the harasser (J) and the aggressor (E) are in front of each other.

Table . Frequency of the behaviors of the chickens classified at the time of the attack and sum of their level of activity.

As for behaviors, it is known that each behavior is linked to the distance between chickens. Chickens tend to approach when they are in a relaxed position, for example, lying down, in the powder bath or in the arrangement of the feathers; on the other hand, when they are collecting or running, they increase the distances between them. This tendency to associate when found in a quiet behavior would reduce the likelihood that an asalta predator (Keeling and Duncan, 1991), while the cookie looking for food or anything else would have less chance of getting what it is looking for, if another chicken is nearby (Klaassen et al., 2006). Therefore, each chicken will have to calculate with great care the distance that suits the other chickens, since this distance would allow maximizing the profit of resources as it reduces the risk of being trapped.

There is an attack on the threat of loss of a resource (Krebs and Davies, 1997). In these attacks on chickens it is still not clear what is the resource that protects the agresora chicken (E), since both water and food are far from the attack points. However, the resources are not always visible, sometimes there can be small stones or small food particles difficult to see on the chicken coop floor. It is possible that the protection of these stones or food particles that do not have a great theoretical value makes sense when there are few chickens around.

As has been said, the individual decision to attack another person is based on the threat of a lost or endangered resource in animals and, why not, in humans (Bradbury and Vehrencamp, 1998), and it has often been proven that an animal's attitude manifests its desires (Carranza, 1994). Thus, our results indicate that the agressor hen has the capacity to perceive the desire and, therefore, the attitude of the other chickens and that the distance, the direction and the behavior between them define this attitude.

Stories of Your Life and Others