Muons: the standard model of physics, in question?

The new results of Fermilab's Muoi g-2 experiment have generated debate among physicists by questioning the standard model of physics. That is, quantum relativistic theory to classify and understand how subatomic particles work.

The problem arises with muons. According to the experiment conducted in the high-energy physics laboratory Fermilab, muons do not have the magnetic behavior they should have according to the standard model, which may indicate that the standard model is not as accurate as was thought. There has been doubt as to whether there is another particle that has not yet been detected, or a basic force that we do not know.

At present we know four basic forces in the universe: gravity, electromagnetism, violent nuclear force (which keeps all particles of the nucleus of atoms together) and weak nuclear force (related to radioactive decay). Only these four. If it were a fifth, it would be a real revolution in the world of physics. We would have to change the standard model and review much of the physics.

Experiments with muons are not new. In the late 1950s, the CERN laboratory first conducted the Muoi g-2 experiment to measure the dipolar magnetic moment of the muons. The muons then saw that they had an anomalous magnetic moment, but there has always been a doubt as to whether it had not been measured with little precision. Therefore, it was repeated in 1966 at the Brookhaven National Laboratory, with 25 times more accuracy. And they repeated it again in 1969, 1984, etc... with an increasing degree of precision. For now it has been the last time. In 2017 the experiment was launched and data have been collected until 2020. We have known the interpretation of this data in 2021. The anomalous magnetic moment has been confirmed again.

Muons are elementary particles, that is, they are not formed by other smaller particles. Protons and neutrons do, but electrons and muons do not. Muons and electrons have all the same characteristics, except for two: mass (which are two hundred times heavier than electrons) and stability (particles that break down immediately as they form, are very unstable; just two microseconds remain integer, disintegrate and transform quickly). When cosmic rays from space collide with the upper atmosphere, particles fall to the ground, including muons, form. They are dissolved in two microseconds, but due to the large amount of energy they have in their origin, due to relativity, for these hyperaccelerated muons the passage of time is slower and they are directed from the upper part of the atmosphere to the terrestrial surface before their disintegration.

Despite the uncertainty, for the moment, the result of Fermilab's experiment has questioned the fundamentals of physics. Since the Higgs boson was discovered, there has been no such emotion among physicists. Is it necessary to identify any unknown basic force? 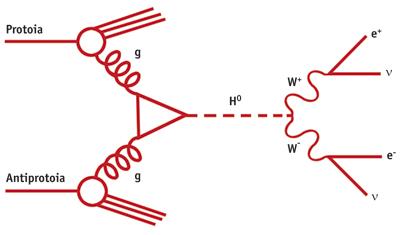