Tidal energy as a source of electricity

The technology to obtain electricity from the energy of the tides was invented long ago, but due to problems of yields and environmental has not advanced. In recent years, however, the advancement of technology has led to the development of systems that prevent environmental impact. 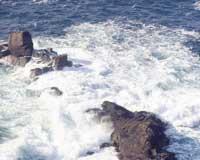 Taking advantage of the energy of the tides is nothing new. Since the Middle Ages, the coastal peasants accumulated the water from the rivers during the tide and releasing the accumulated water at the low tide circulated the water mills. We have many examples on our own coast. XX. In the second half of the 20th century, engineers began to study the path of electric power from tides on an industrial scale, but although obtaining electricity from the tide was not technologically complicated, it was not economically profitable. Several projects were carried out, but not profitable due to the serious problems that occurred in the machines and installations, which could not adequately withstand the harsh marine environment. But in the 1990s it has been found that the advancement of technology has made it possible that obtaining cheap energy from the seas is not a dream, but a real option. And in several states of the world, projects have begun to be analyzed.

Until recently it has been considered that the most suitable places for the use of tidal energy were estuaries, in which a large volume of water flows through a narrow space, giving rise to fast high-speed waters. When a dam is built at the entrance of the estuary and the pleamar starts, the access is closed. Consequently, in the sea area of the dam the water level increases compared to that of the other party. In the last two hours of the tide the ports are opened and the sea water is directed towards the estío through the turbines, generating electricity.

Figure . Outline of the central tide of the estuary.

When the tide is higher, the ports are closed again and the water is deposited in the estuary during low tide. At the end of the low tide the portillos will open and the water will pour from the estuary towards the sea, moving the turbines in the opposite direction, generating once more electric energy. In the world there are two marine power plants in operation: One of 16 megawatts in Canada, Nova Scotia, and the well-known central La Rance, built in 1967 on the coast of Normandy, with a dike of 750 m in length and a power of 240 megawatts.

The idea of the estuary dam, technologically adequate, poses serious environmental problems: the intertidal habitat of the estuaries, the habitat of the fauna, deteriorates, hinders the circulation of the fish, the turbines trap and kill the fish, hinders navigation and, in addition, the sediments that remain trapped in the dam can quickly reduce the volume of the estuary. Therefore, researchers and engineers have ruled out dike technology in estuaries.

An opportunity: central at sea

However, on the basis of this technology, but to avoid environmental problems, a system has been developed consisting of the construction of a pond in the sea, near the coast, supported on the submarine soil, a walled enclosure. With the tide up (1) the pond will flood and the water will accumulate there when the tide drops. At low tide (2) the water of the pond and the sea water are not at the same level and, with the open ports, the water of the raft will be poured into the sea through the turbines; in this step the power plant generates electricity. Once emptied (3), the foil water and seawater are at the same level. Then access to the pond will be closed and when the tide rises (4) there will again be a level difference between sea water and pond water. The valves open and the sea water penetrates the raft through the turbines, where the power plant also generates energy. When the pond is filled (5), the cycle begins again. In Alaska, Mexico and India, projects are being developed for this type of seaport.

Due to environmental problems, researchers and engineers abandoned the technology of estuarine tides and began to study the potential of coastal currents. In fact, as tides rise and fall, currents often form near the coast (often far from bays and estuaries). The relief of the submarine soil in many places forces the water to cross narrow channels or to surround the ends, as the orography on earth forces to circulate the wind through narrow valleys or surrounding the mountains.

But the density of seawater is much higher than that of air (832 times). This means that a current between 2.5 and 4 meters per second has the same kinetic energy as the wind at 390 km/h. And it has the advantage that it is not known when the wind will hit, it does not sound every day, but the current caused by the tides is daily. Two technologies are currently being developed for energy generation in marine currents: tide barriers and tide turbines.

The technology of sea barriers is similar to that of estuary dams, but this time it is about placing them not in estuaries but in tides or in channels between small islands. They will not work on the water level difference, that is, they should not store the water anywhere, as they will directly use the tidal current energy to move the turbines. The main advantage of tide barriers is the possibility of installing electrical machinery (generators and transformers) over water. The Philippines and Japan are developing projects for such barriers.

For example, the Government of the Philippines will invest 136 million dollars in the construction of such a facility in the north of Mindano Island. The 30-megawatt power plant has learned from what happened at a Japanese pilot plant in the Kurushima Strait in Japan, where marine plants grew and proliferated at the turbine site and reduced their performance, and improved their technology: They use the new Davis turbine. It is a vertical axis turbine, with also vertical blades parallel to the turbine axis.

On the other side are the tide turbines. The ones that need fence or dam are more suitable from the environmental point of view, since the boats can continue to use the environment and need much less material and work to build it. For example, a 20 m diameter turbine can get the same power as a 60 m diameter wind turbine. And it is not seen or heard because it is under water. 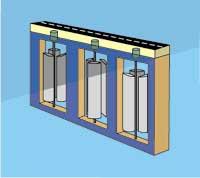 This type of turbines offer a good performance when the speed of the current is 2-3 m/s (if the performance is lower considerably and they are not profitable economically and if the speed is higher the machinery and facilities are much higher). The most suitable location is located near the coast, at a depth of approximately 30 m. The promoters of this technology ensure that in the most suitable locations a power of more than 10 megawatts per square kilometer could be achieved. This technology uses the Seaflow project mentioned in the table on page 19 and is expected to be launched this year. 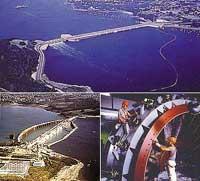