As we spent a few days in Brittany and Normandy, we decided to visit the Mont-Saint Michel, so famous from the tourist point of view. Three or four kilometers before reaching our goal was evident. It was an island, but surrounded by land. The surrounding terrain looked like the bottom of a large bay, but no sea was seen. When we spent a couple of hours inside the castle of Saint Michel and went to take the car, we realized that the island previously surrounded by land was surrounded by water, that is, the sea that was not seen before was in sight.

The difference in level between high tide and low tide is greater than 10 m in height in these areas. Therefore, large amounts of water move up and down.

Therefore, it would not be surprising to find an application based on the maritime movement. So between Saint Malo and Dinard we find a power station called La Rance.

The central one looked like a large lake. The structure is similar, that is, there is a river called La Rance. There is a bay that collects the water poured by the river and a long wall that hinders the travel of the water. What makes the difference is the sea on the other side of the wall.

After leaving the car in the parking lot at the beginning of the wall, we went on foot through the wall. There was no noise or smoke. There were no bad smells and the dirt in the water was no greater than elsewhere. As the tide was below, in the part of the wall that touched the sea you could see some large holes. 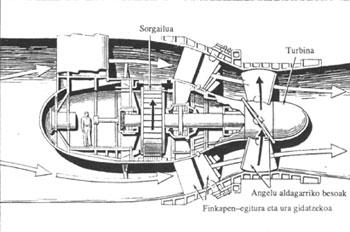 The following figure shows the structure of the La Rance turbines. These turbines turn in the same direction when rising or lowering the tide; the arms of the propeller have a variable angle. When the reservoir is filled or emptied, electricity is supplied to the turbines in the short term for them to act as propellers. The goal is that before starting the next cycle the difference between water levels is as high as possible.

As they were walking and parallel to the wall and in a row, some whirlpools of water were uncovered in the sea. When we crossed almost the entire wall, we reached a large room by stairs that were directed to the interior of the wall. The structure and operation of the plant was explained in large panels. Although it seemed a lie, inside the wall was an imposing building in the form of a bunker. Vados, stairs up, stairs down, machinery and personnel looked anywhere.

The first steps for the construction of this plant were taken in 1941, when a project study society was established. Construction began in early 1961 and the works ended in December 1967.

In construction research, four were the topics to be addressed simultaneously. On the one hand, mathematical problems, both theoretical and practical, pose the nature of this type of energy.

can be said that a new science was created

The problems of civil engineering also had to be overcome. The mouth of the bay was 750 m long and the amount of water moved by each tide was 360 million cubic meters. The work was done on land. 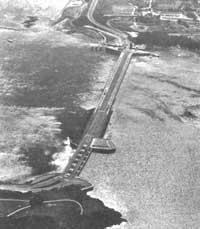 The construction of the turboalternator set required special investigations. As a result of these studies a new horizontal axis system was devised. Currently this system is used in areas of height less than 15 m. The turbines operate in two current directions (up and down) and are prepared to overcome the corrosion problems caused by marine waters and others. A total of 24 turboalternators have been built.

The wall has been used to join the two ends of the mouth of the bay and on it a two-way road has been built. Civil engineering problems have been important due to the long mouth of Badira.

The building is shaped like a reinforced concrete tunnel. Here are the high-voltage cables, the machine room and three transformers that pass the current voltage from 3.5 to 225 kV. The electric current is sent to three different places: To Brest, passing by the Cordillera Media Rennes and the territory of Alençon.

But how do you get this kind of energy?

It does not need fuel, does not generate pollution and is an obvious advantage. However, the main drawbacks are two:

On the one hand, the need to find a suitable geographical location, since in all places the difference between high tide and low tide does not exceed ten meters.

On the other hand, high construction costs must be taken into account. The closure of the bay has great difficulties and the sea also puts nearby buildings and materials in corrosion.

Barriers are still more important than advantages, so the only existing tide control is La Rance.

In the future it seems that the United States and Canada will be responsible for this type of energy, even if they have no concrete intention in the short term. 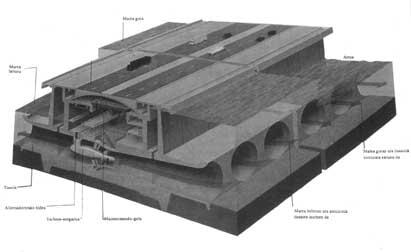