The earthquake that occurred last December in Armenia caused the death of some 30,000 people. However, this figure can be surpassed in the future by many geologists. More than a third of the world's largest cities are located in areas at risk of earthquakes.

The earthquake in Armenia was not great. He scored 6.9 points on the Ritcher scale and the world's seismologists measure almost every month earthquakes of this size. 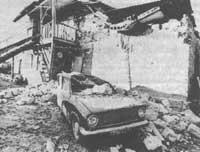 Geologist Roger Bilham of the University of Colorado has analyzed the location and risk areas of earthquakes of about 100 supercities in the world, with more than 2,000,000 inhabitants at the end of the century. 40% is less than 200 km from the edges of the tectonic plates or points where earthquakes have occurred previously.

According to seismologists, deaths are not earthquakes, but constructions. Buildings not designed to withstand earthquakes have created most of the victims in Armenia and in 1987 10,000 people died in Mexico. In the latter, the epicenter of the earthquake was hundreds of kilometers from the city.