Underground robots allow trenchless cable laying on the street, extension of power lines or overhaul of gas pipes. Guided by laser beams, they work quietly without street people noticing it.

The streets of our villages rise every year with noisy pneumatic hammers to install pipes, improve the water supply network or repair telephony and electricity cables. To do this, trenches are made in which municipalities spend a lot of money. In addition, the shops adjacent to the ditch are less frequented, people cannot be quiet on the sidewalk and in the end it is very expensive to close the ditch and put the street in its former state. We must also take into account the accidents that occur with these ditches.

This situation is very best with underground robots. These machines perform all these jobs and repairs perfectly without opening any trench. This type of robots are used no longer only in Japan, but especially in Britain, Germany and Scandinavia. In France it has recently started to be used in the Paris area. In fact, through the conventional system, the duration of a week of work is reduced to a day using these mole robots.

These underground robots are a kind of miniature machines for building large tunnels. They carry radar and camera or gyroscope to guide them from above. These robots basically require two wells: one at the beginning of the work to place the robot and the other at the end to leave at the end of the work.

The machine enters the initial well and is oriented in the direction of the line. Then they put it on a stand and push it by cylinders capable of generating a force of up to a hundred tons. The drilling head is chosen according to the characteristics of the terrain and rotating around the ground opens its gap as if it were a mole. In turn, between the initial well and the cutting head water is passed under high pressure. The water, in the return circuit, drags the raised fragments to the decanting vessel located at the top.

Underground robots are miniatures similar to the machines of building large tunnels. They carry radar and camera or gyroscope to guide them from above.

Sometimes, especially when there is soft soil, the system projects the liquid clay to pressure to prevent the fall of the soil when passing the drilling head. The cylinders that push the head forward usually have a two-metre course. When they advance this distance they are collected back and in the support a piece of two meters long is placed. Then the drilling head turns again and the cylinders begin to push.

To fix the axis of the tunnel that is intended to be made, in the initial well, a laser beam hits the sight located at the back of the machine. All information is sent directly to the post from the outside of the pilot so that the driver, if necessary, changes the direction of drilling. For this purpose, the cylinders located in the articulation of the drilling head must be handled from the position.

The robot is able to open the hole correctly, but when you are going to make a curved path it has more obstacles and is not so precise in long curved lines of laser telegetación. To overcome this difficulty, the Japanese company NTT uses in its Tsukuba pilot center a fiber optic gyroscope to guide these robots or automatic stops. It is mounted on the drill and in any curve there may be a maximum error of sixty or a second degree, that is, a error of 4 centimeters on a path of one hundred meters.

However, this type of robots, in addition to installing new holes and pipes, must prolong the underground lines and pipelines made previously or review existing ones. In any city, for example, there are miles of the water supply network to study and renew, but working without opening ditches is not so easy. Through this system can be repaired the pipeline of 150 meters of oxidized casting at the beginning and at the end without doing more than a hole. Two special machines are used with a shield above.

If the rusty part is the outer part of the tube, the problem is usually more serious, since it is necessary to replace the whole tube. The only system to replace the pipe without opening trenches is to divide internally by a cutting piston and compress the pieces into it.

Having no artificial intelligence, these robots/mole do not know how to avoid obstacles. In the event that the execution of a pipe section or line is necessary, there may be other facilities or pre-established barriers at the same site. Many of these facilities or barriers may be in the plans of the technical services of the City Hall, but there are also many unforeseen and anything can appear underground. In Britain and Japan they use a pulse radar on the street to detect the buried.

The radar is passed slowly over the part to be investigated and analyzes the signals reflected in the ground. Whenever there is a structural change in the subsoil, the profile of the reflected signals indicates that the tube is at a certain depth. In the first review, between 60% and 80% of the pipes are detected, but then it is passed over and over again along the same path, detecting different depths. (To do this, you have to change the frequency of the wave emitted during the period.) This allows to know 95% or more of the underground objects.

The detection of pipes and cables is one thing, but the ground structure itself can also undergo modifications. If the drilling head in the sand subsoil found limestone, the teeth would spoil. Therefore, gamma rays are used to study the underground structure and the electronic density of the materials is known with the help of probes. Neutron irradiation is also used to measure the amount of groundwater. In addition, the neutron probe seems to be useful for detecting leaks in water pipes and taking advantage of water waste in cities due to breakdowns.

However, it is clear that in the future the pneumatic hammers and ditches that now bother us will be considerably reduced in the streets. 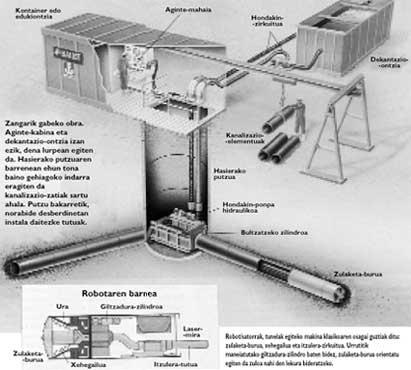 To see this photo you can go to the pdf 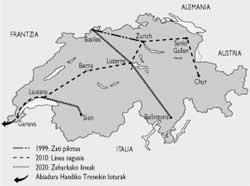 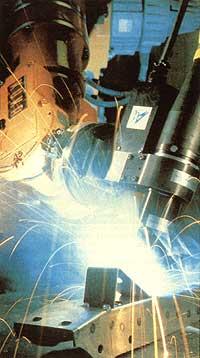