Deposit for the future of the past

The aim of the Deposit is to bring to the future objects that convey the culture and customs of the past. It contains thousands of pieces, stored in special conditions, with the intention of stealing the most time. 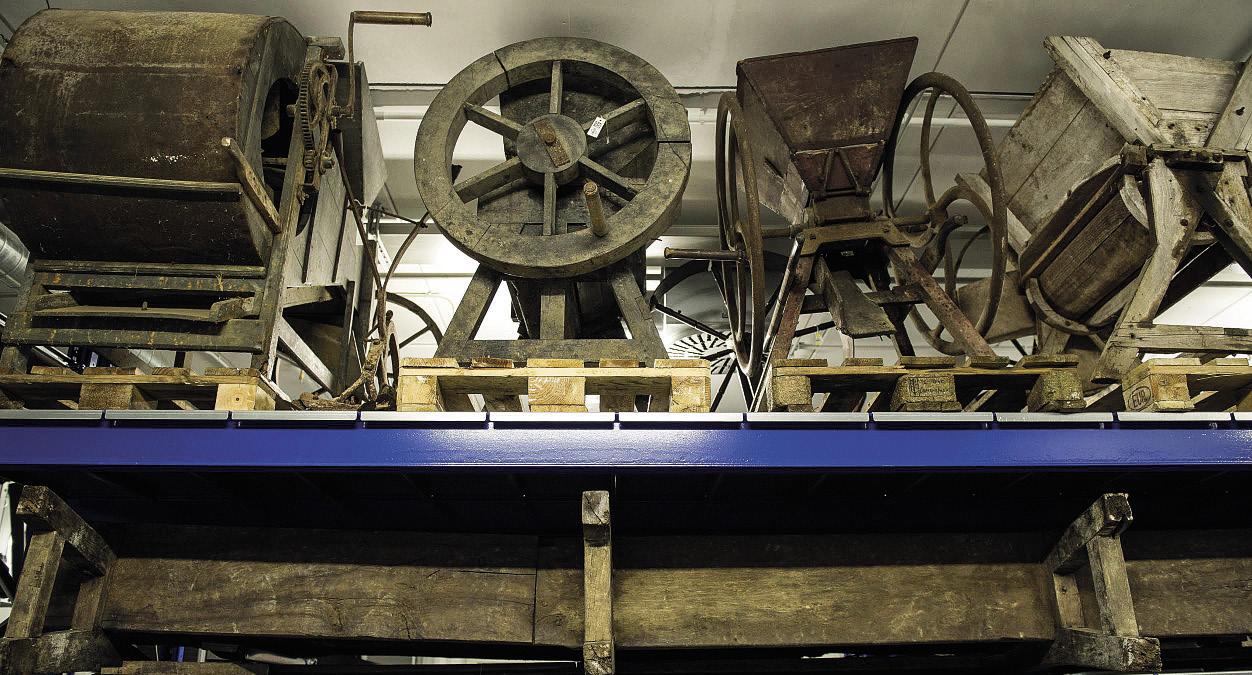 Seen from the outside looks like a giant container. And appearance does not deceive. The Warehouse is a container that houses more than three hundred thousand pieces, the Cultural Heritage Center Furniture of Gipuzkoa. The building is located in Irun, on the high Arretxe, with 9,000 m 2 distributed over three floors.

The deposit was created by the Provincial Council of Gipuzkoa in 2011. Since the 20th century, artistic and ethnographic pieces were being collected to conserve and conserve. “Diputaciones XIX. In the 20th century, scholarships were granted for students to study fine arts in Madrid, explains Antton Arrieta, head of the Deposit, and as a consideration students had to make a painting or sculpture each year. Then they started collecting.” Elías Salaberria is one of the people who received the scholarship and his paintings of the time are in the Depot. “Then, XX. At the end of the twentieth century the Council began to acquire ethnographic pieces from chatarrerías, hamlets, etc. It had about 25,000 pieces by the end of the century,” added Arrieta.

These pieces are stored and guarded in the Warehouse, but also the furniture heritage of other Gipuzkoan entities. For example, 26,500 pieces of the San Telmo Museum, almost 5,000 of the Naval Museum, or 7,500 of Porcelanas Bidasoa. Today it has about 65,000 pieces of art and ethnography. It is also since last year warehouse of archaeological material of Gipuzkoa. “In Bizkaia and Araba the warehouses are archaeological museums, but in Gipuzkoa they did not exist. And since here we had the possibility of keeping it in condition, here we brought all the archaeological material that was collected,” said Arrieta. “We think there are about 300,000 pieces, but it’s in boxes and we don’t have pieces per piece, like art and ethnography.”

The Tank also has space for individual parts. “Every week there’s a piece that a family gives us,” says Arrieta. Recently, for example, a Aguirre piano was incorporated by a family from Pasaia. “We didn’t know him, a factory that in Ibarra had made thousands of pianos. This has the manufacturing number 1.259. And we have no idea what time it is. It’s a nice topic to investigate.”

In fact, they take into account the investigation in the Deposit. There are two rooms dedicated to researchers, on the first floor. “It is the most used by archaeologists. It becomes less ethnography, it is not fashionable. But there are many possibilities of ethnographic research here.”

Dissemination is another of the fundamental pillars of the Deposit. “It is not only to preserve, but to disseminate and make known,” explains Arrieta. Currently several museums in the area are equipped with Deposit pieces: Igartubeiti, Zumalakarregi, San Telmo... And temporary exhibitions are frequent. Last year, for example, 13 pieces were removed for temporary exhibitions.

In addition, they plan to put on the internet the entire catalog of the Deposit with photographs and tokens. And they will also offer the possibility to print some of the selected parts with 3D printers. According to Arrieta, the website has two objectives: “that any citizen can know what is here and that researchers can more easily choose the pieces they want to analyze.” They expect the web to come out soon. “It’s a lot of work, but it’s going to be very satisfying.”

Visits have also been organized on occasion, but Arrieta has made it clear that “visits must be limited because they go against conservation”. And ultimately, conservation is the first goal. 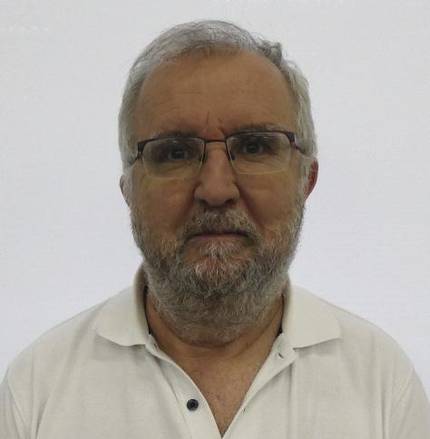 Every time a piece or lot arrives at the warehouse (whether new or coming from an exhibition) they are given the treatment they need depending on the material. If it is organic (leather, wood, paper, fabric…) it is placed in anoxia to kill possible insects, etc. To do this, it closes tightly with plastic and the nitrogen is introduced for 6-8 days and expels oxygen until it runs out of oxygen. It is then maintained for at least 27 days at 22-24ºC (for insects to remain active).

The pieces that come from the sea get into a pool and “like cod, changing the water they are removed salt”, explains Arrieta. These are, for example, three or four cannons brought from Getaria. “They belong to a war between Spaniards and French of the seventeenth century in Getaria. The Spanish fleet was anchored around Getaria, and with winds from the east that rarely occur on our shores, the French attacked and destroyed many ships.” Subsequently, this type of iron parts are eliminated by electrolysis by oxidation and crimes. To do this they place the pieces in a metal mesh and with an anode and a cathode at the ends the electricity is passed.

The pieces of wood, in cases where they arrive wet or with high humidity, for being buried or in water, get into the pool. This prevents it from drying too quickly during the appropriate treatment. “Now we have a Roman staircase of the mines of Arditurri and a tolare of Bergara discovered underground, among others. In the water they do not rot, they can be without limits”, explains Arrieta.

However, they are not left to weight. Stabilize the pieces of wood by their lyophilization and treatment with polymer PEG (polyethylene glycol). The freeze-drying part freezes and gradually warms up in a vacuum machine. In this way, the frozen water is sublimated, passing directly from the liquid state to the gas. The process can last several days depending on the size of the part, but in this way it is possible to dry the part without transforming it. 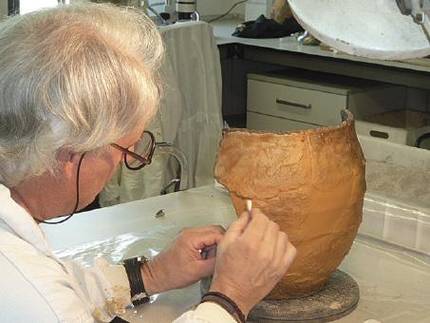 Other parts are treated with PEG polymer. In this case they are put in a bath and, playing with the temperature, the water containing the wood is replaced by the polymer. “Large pieces can stay in this bathroom for three or four years,” explains Arrieta.

In addition to these treatments, the parts are cleaned, the manual removal of dust, clay, etc., as well as the fungi or lichens in cases where they contain them. In some cases they are also restored, fixed. However, “it is impossible to restore all the pieces that enter”, explains Arrieta, “and, in addition, the characteristics of the use must be maintained many times. For example, if the baserritarra has put a wire to fix something, that's also history. They are often arrangements to remove the beret.”

Finally, photos are taken, the tab is created, the parts are tagged and go to the warehouse, depending on the material, a warehouse or another. There are a total of seven. In all of them the climatic conditions are perfectly controlled. Some sensors constantly receive these conditions and if they pass through the established limits turn on the alarm.

The temperature remains the same in all warehouses, between 19 and 21ºC, depending on winter or summer. This change of temperature from winter to summer is mainly due to the energy savings it entails and is carried out in a very progressive and constant way. “The most important thing is to maintain stability in climatic conditions,” says Arrieta, “abrupt changes are the most harmful.” 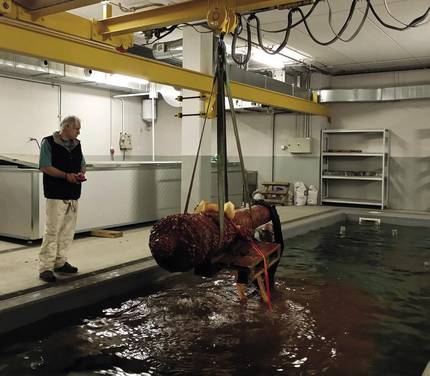 The pieces from the sea are introduced into the water. Changing the water removes salt. Ed. Deposit

What changes from warehouse to warehouse is moisture. In five warehouses it is around 65%. Here are stored, for example, the pieces of wood, which is best preserved with certain humidity. In one of the other two tanks it remains around 50% to preserve moisture, paper and fabrics. Finally, in the iron warehouse the humidity is less than 40%. “Our restaurateurs would want 0 humidity, but it is impossible” adds Arrieta. “Humidity is our rival. In other places there is pollution, but we have no problems with pollution, but being close to the sea, our problem is humidity. And in that we spend the soda.”

On the other hand, the warehouses do not have windows. This prevents the entry of sunlight, which is harmful to its conservation, as well as the entry of dust and insects, etc. “In addition, without windows the warehouses have more inertia and it is easier to maintain climatic conditions with less energy. And even if we ran out of energy, these conditions would last longer.”

Despite all these measures, some materials are better conserved than others. Stone is the best preserved. “We have started to take to the corridor stelae, lintels, etc. And we're thinking of taking it somewhere else, because they don't need special conditions. Just protect yourself from rain and ice,” explains Arrieta. At the other end is iron. “It is laborious. So much effort must be made to restore and then a little moisture is enough for rust to reappear.”

In the fight against time, the challenge of the Deposit is to keep the assets to the maximum. “We say among ourselves if within 100 years we get the pieces to be as they are today. That is our goal. We know that we will finally lose the battle, because everything has its expiration date. It’s a struggle to get lost, but maybe in 5,000 years.” 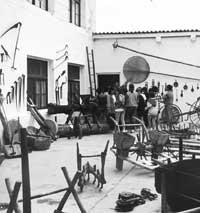