They study the abnormal phenomena of the Honga volcano on Earth and in space. 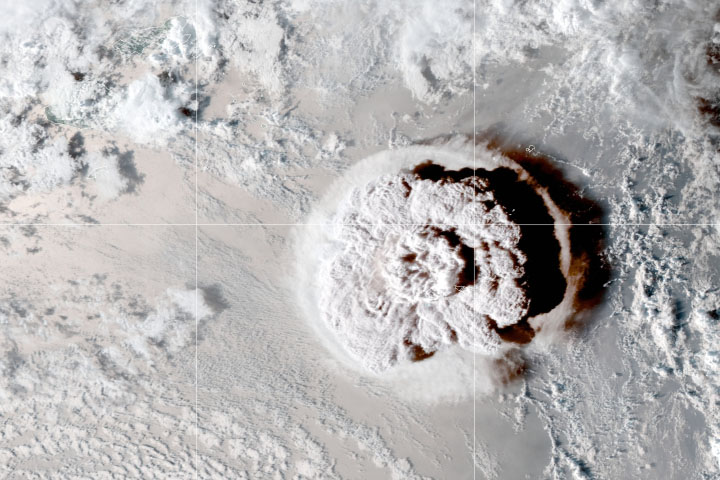 The eruption of the Hunga volcano (Tonga Islands) on 15 January caused the largest air explosion documented in the modern geophysical record (similar to the devastating eruption of the Krakatau volcano in 1883). Through modern terrestrial and spatial detection networks, researchers at the University of California have been able to accurately describe abnormal physical phenomena caused by the eruption. The results have been published in the journal Science.

Several atypical phenomena have been identified. It is clarified, for example, that the strong infrasound of the Hungarian eruption (0.01-20 Car) spread throughout the world, including a long-range audible sound (more than 20 Hf), as well as a sound heard at 10,000 km (Alaska) at the largest recorded distance.

On the other hand, the eruption dispersed atmospheric pressure waves of various kinds throughout the world, and these waves have attracted the attention of researchers. The biggest one was the Lamb wave, a low-frequency atmospheric wave, which went four around the Earth in one direction and three times the other way. These waves travel at the speed of sound and cause the displacement of large volumes of air. Lamb's waves are high-frequency sound waves that are left out of the human ear. Lamb's waves also spread during the Cold War, when nuclear tests were done.

Because of its movement across ocean and marine surface, the Lamb wave generated scattered tsunamis. As they originated from a wave of atmospheric pressure, it seemed like continents jumped. These tsunamis quickly landed on the coast two hours before the typical tsunamis, leaving the researchers in a state of emergency. The research shows that Lamb’s arrival was so quickly driven by the wave.

Another factor that surprised researchers was the cloud caused by the explosion, which created an umbrella cloud that reached an altitude of 30 kilometers. Researchers consider that the warm magma was the result of such fast contact with sea water. The magma was full of gas and heat transfer between the hot magma and the cold water caused strong explosions.

The effect of the explosion into space

According to a NASA report, the effect of the eruption reached the upper layer of the atmosphere, the ionosphere. The ionosphere is the boundary between the Earth and outer space where orbiting satellites recorded waves of extreme groups, similar to those caused by hurricanes. Abnormal electrical currents were also observed. According to NASA, it has been the greatest influence recorded in space in modern times.

Detailed research into the phenomena caused by the volcano has been based on data obtained from atmospheric pressure sensors, seismometers, hydrophones, global navigation satellite system (GNSS) receivers and meteorological satellites worldwide. According to researchers at the University of California, this network has enabled the eruption in Hungary to understand the physical phenomena caused by volcanic eruptions: how Lamb's waves spread globally, how air oscillations are curtailed with solid soil, how air waves spread, how air waves excite infrasondes and audible sounds globally, how air waves produce, etc. Moreover, they add that there is great potential to study in greater detail the data of global waves, as there are interdisciplinary data and data obtained thanks to the science of citizenship worldwide.