The use of genetic fingers is a sufficient technique among forensics. However, a new process will soon be launched that will revolutionize this technique. In fact, genetic information will be provided by a barcode and DNA fingers will be much more accurate than before.

Traditional genetic marks are based on comparing small portions of DNA. These parts are called minisatelites. These parts are repeated several times and the number of repetitions varies by person, except for the identified twins. For example, when there has been a murder, forentsees have some blood or a piece of hair to do their job.

They extract the DNA from these samples and then fragment it. The special rooms separate the parts and appear in the form of dark bands. Bands of different people have different length. However, it is sometimes difficult to compare these bands, for example because they do not look very clear. Consequently, several US courts are questioning this technique.

The same process overcomes these problems. In the double helix of the DNA each gene has two alternative forms or alleles. One comes from his father and the other from his ainara. When the pieces are repeated there are three options to organize pairs of alleles.

For example, if one allele is "red" and the other "blue", in each position there may be two reds, two blue or red and one blue. If each of these combinations is assigned a number, for example 1, 2 and 3, the repeating part can be expressed digitally.

This pathway, in addition to facilitating the comparison between both samples, has doubled the number of comparable genes. However, this new technique still needs adjustments. 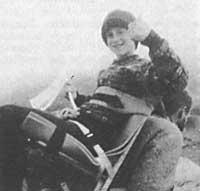