Machinery for the prevention of neurodegenerative diseases

Adequate cellular and protein renewal is essential to ensure the proper functioning of an organism. To this end, there are different systems of quality, obsolete or responsible for the detection and elimination of cells and proteins in poor condition. To avoid the aggregation of proteins that cause neurodegenerative diseases, one of the most important is the Hsp70 system, essential in a healthy and more pathological state, where there will be more damaged proteins.

Example of a Hsp70, human Hsc70 structure by homology in this case. Ed. Lorea Velasco with Chimera

Proteins are basic components of life, as they guarantee the functioning of cells. These molecules, made up of a small alphabet of 20 amino acids, occupy at most the functions that take place in the cell, from chemical reactions to structural functions. The protein collection -- proteome -- that's in an organism at any given time is very variable and almost infinite, although all the information to build the collection is encoded in the genes.

The main dogma of molecular biology explains the transfer of DNA information to proteins, being the RNA mediator. Gene expression begins with transcription, where the DNA double molecule produces the RNA auxiliary chain, which will be a copy of that particular genetic information. In the second step, messenger RNA returns to the machinery called ribosome, obtaining the protein. The newly synthesized protein must assimilate an adequate three-dimensional structure to be functionally active, but in cells this process is not always spontaneous.

Molecular chaperones are essential in the cells, as they are responsible for the quality control of the proteins, thus ensuring the homeostasis of the proteins2. And that is that many proteins need the help of the txaperones to get their native structure. Without their help, problems can occur in the protein folding process and form poorly folded intermediaries. These intermediaries will emerge the adhesive zones that should be in the core of the protein and tend to aggregate them4. In addition, the aggregation of one type of protein can influence the aggregation of other protein species, allowing what is known as coaggregation.

The freshly synthesized protein folding process is not the only way to generate the first intermediaries of aggregates. In fact, proteins that already have an adequate three-dimensional structure (native structure) can also undergo deolations and form reactive intermediaries. The main causes of this destabilization are related to mutations or cellular stress, which is higher in the elderly, since the mechanisms of protein homeostasis are more obsolete.

In fact, in a normal situation, in the face of any cellular stress, the molecular chaperones perceive and respond rapidly, thus maintaining the homeostasis of proteins. However, when stressful situations such as mutations are imposed or chronic, it is more difficult to ensure the quality of cellulose protein6. In these circumstances, the presence of molecular txaperones is lower to deal with the problems of protein flexion (due to its lower expression or the saturation of the system to counteract cellular stress), increasing the amount of damaged and poorly folded proteins7. 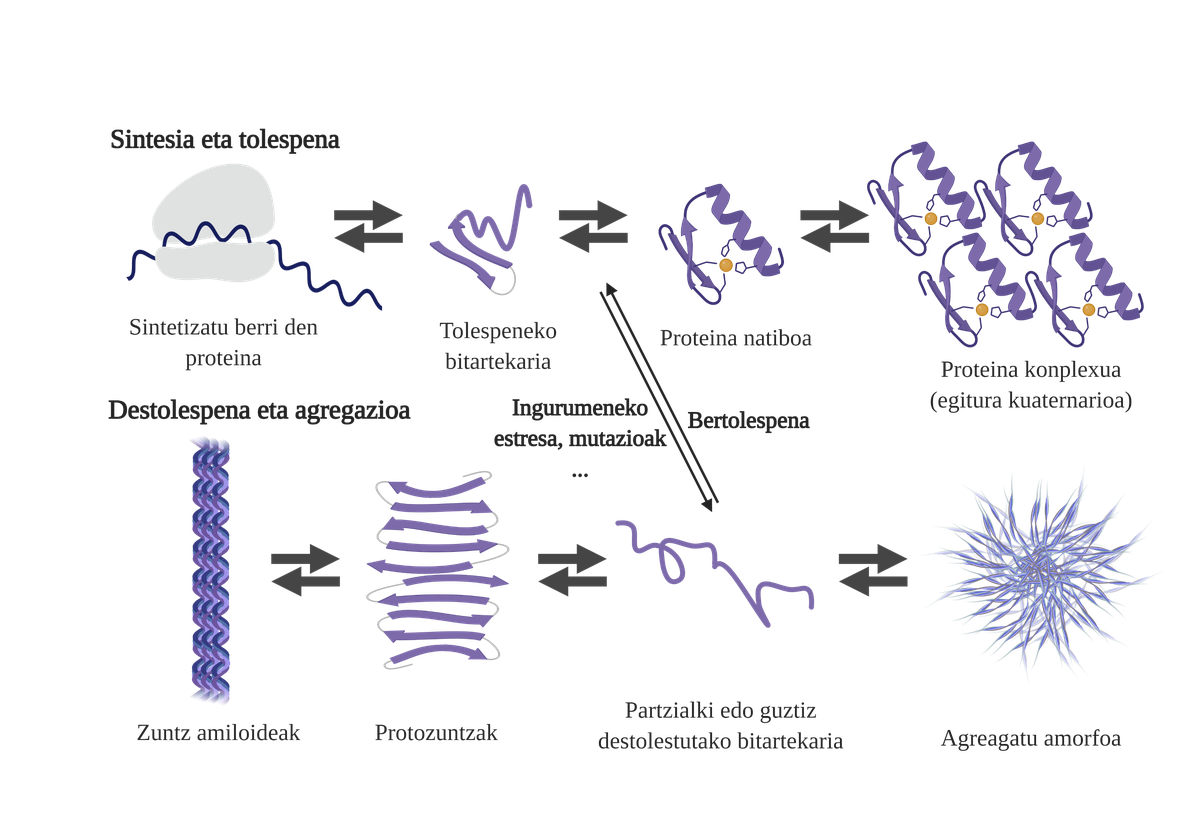 Figure . [Scheme of cellular aggregation of proteins]. On the one hand, the freshly synthesized protein folding process to obtain a native and active structure. On the other hand, the aggregation processes that the potential intermediaries will follow throughout the process for the formation of protein aggregates. Ed. [Lorea Velasco with BioRender].

Aggregation and effects of aggregates

The processes of protein aggregation in these diseases are slow and organized. Currently, the most accepted model to explain the formation of amyloidogenic structures is nucleation polymerization. According to him, the aggregation process presents a characteristic kinetics that can be divided into two distinct phases: lag or nuclear and exponential or stretching. 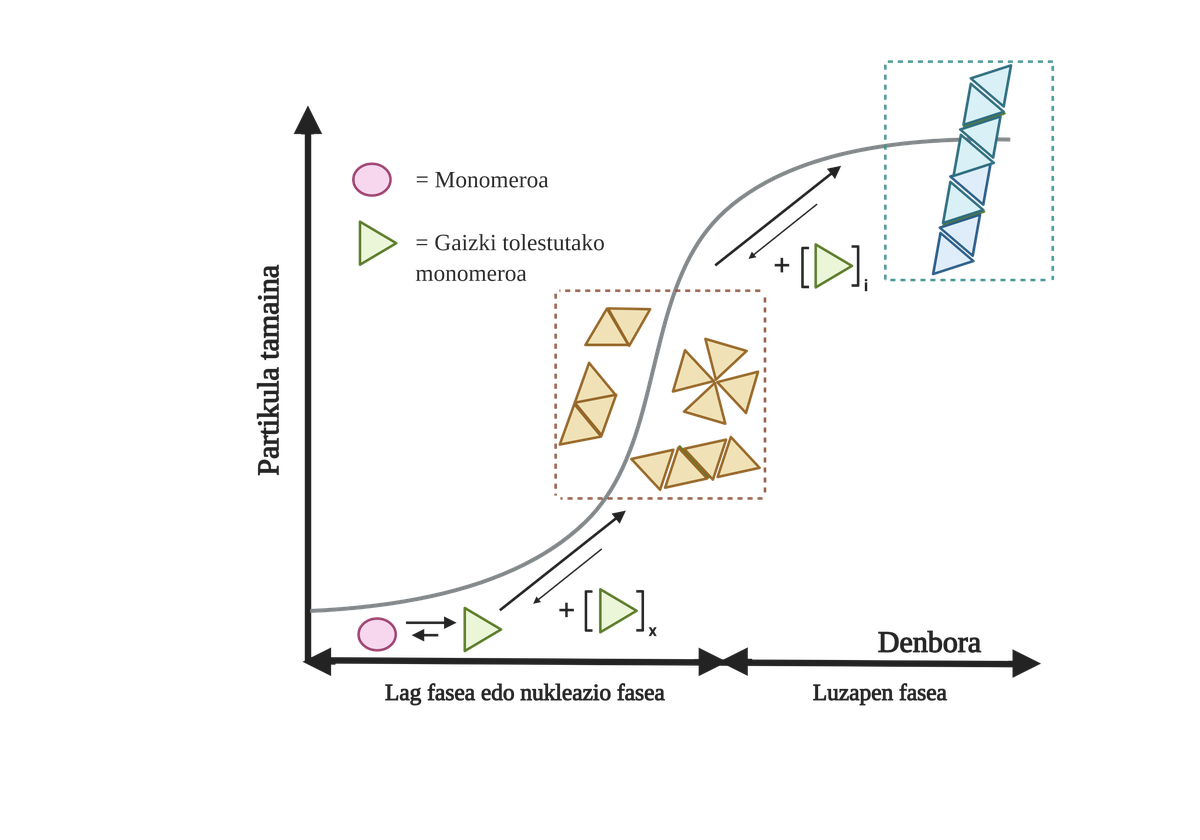 Figure . [Proposed nucleation-polymerization mechanism to explain the formation of amyloid fibers]. Poorly folded monomers in the nucleation phase join each other. In the stretching phase, the size of oligomers will increase exponentially until reaching amyloid fibers. Ed. [Lorea Velasco with BioRender].

In the Lag phase, the first intermediaries called seed or nucleus are created, the reagents. These structures form small or oligomeric aggregates of poorly folded proteins that have joined each other and begin the second phase. These small aggregates or oligomers accumulated in exponential phase attract more proteins forming larger aggregates until they form amyloid fibers 10.

Nowadays it is not entirely clear what the role of aggregates is, but it seems that aggregation intermediaries are the most toxic to the cell. According to this hypothesis, the aggregation process would therefore be a method of cellular protection against toxic intermediaries. In any case, it is known that amyloid species accumulations are toxic and that their accumulation produces neuronal apoptosis or programmed cell death in the brain.

The natural, accurate and programmed death of neurons, neuronal apoptosis, is an essential process for the maturation of the central nervous system. However, once the central nervous system is well developed, most adult neurons will remain throughout the life of the body, as the rate of apoptosis of neurons is very low. Early apoptosis of neurons or poorly regulated aberrant apoptosis cause neurodegenerative diseases. Considering in which area of the brain amyloidogenic species accumulate and the resulting apoptosis of neurons, a different neodegenerative disease will develop. For example, the loss of hippocampal neurons is related to Alzheimer's, while the decrease of dopaminergic neurons in black substance is related to Parkinson's 14.

The role of molecular txaperones in toxic intermediaries

To allow the regeneration of poorly folded or aggregated proteins, it is necessary to coordinate three families of molecular chapperons: Hsp70, Hsp40 and Hsp110. Among the three, they form the Hsp70 system, which, using the mechanical energy released from the hydrolysis of the ATP, allows the poorly folded proteins to obtain a native structure thanks to the process called the ATP cycle (Figure 3). The Hsp70 protein consists of two domains: the nucleotide binding domain (NBD), in which we will have ATP or ADP nucleotides, and the substrate binding domain (SBD), which depending on the nucleotide associated with NBD, will be in open or closed form. 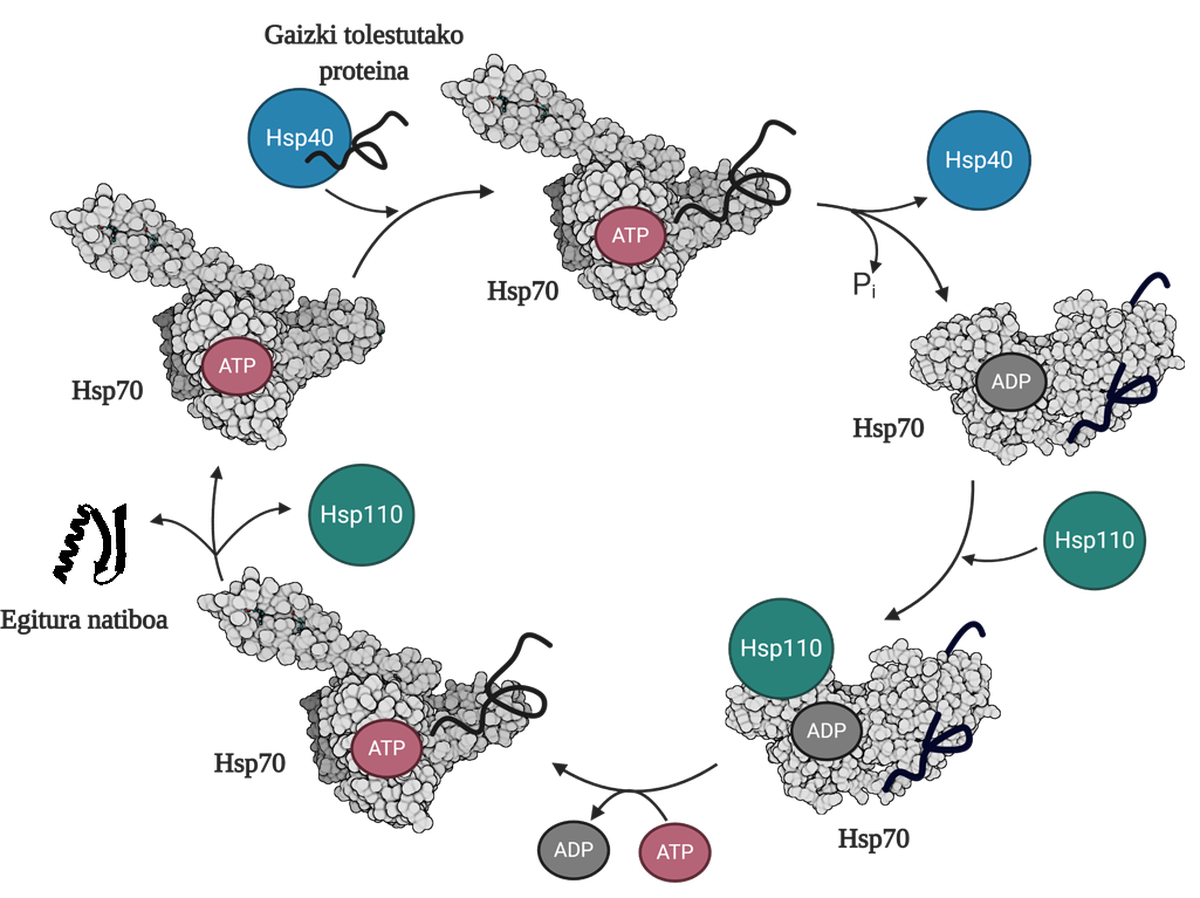 Hsp40 protein will affect a poorly folded mediator and transfer to the Hsp70 chaperon that is bound to ATP, whose SBD domain will be in open conformation in the presence of ATP. By stimulation of the substrate and Hsp40 protein, the Hsp70 hydrolysis of the ATP, leaving the ADP subject to Hsp70. In this situation, Hsp40a will be released from the complex and the substrate will be trapped in the SBD of Hsp70, since in the presence of ADP this domain will acquire a closed conformation. At that time, the cycle will include the Hsp110 or the Nucleotide Exchanger (NEF) and exchange the ADP containing the Hsp70 with a new ATP. Due to the presence of ATP, SBD will return to the open form and release the substrate to the medium. Thus, the substrate will have another possibility to fold well, it will normally be able to obtain a native structure and the Hsp70 protein will be recycled for a next cycle 10.

The disaggregation/replenishment function of the Hsp70 system is therefore essential to avoid the accumulation of toxic intermediaries, since besides avoiding the generation of these toxins, it is capable of disaggregating already constituted oligomers. The efficient functioning of this system entails the ability to prevent diseases related to folding problems such as Parkinson's, Alzheimer's or amyotrophic lateral sclerosis.

One of the main characteristics of cancer is the immortality of cancer cells. The rapid division of cancer cells and resistance to apoptosis are primarily responsible for the tumor increase. Cancer cells use different pathways to prevent apoptosis, mainly inhibition of pro-apoptotic signals and increased anti-apoptotic stimuli. In this way, they manage to maintain tumor cells, despite suffering high stress, without entering apoptosis. As the Hsp70 system is an anti-stress mechanism, in cancer cells the overexpression of chaperon Hsp70 is very frequent, favoring resistance to apoptosion16.

[The Hsp70 system as a therapeutic target for cancer].

Given the importance of Hsp70 in tumor cells, it seems that it can be a suitable therapeutic target to reduce the resistance of cancer cells to drugs and therefore decrease tumors 17. Studies show that decreased expression of Hsp70 is toxic to cancer cells, but is not evident in unchanged cells.18 Inhibition of Hsp70 affects more tumour cells, which will have priority over normal cells. In fact, the (constantly stressed) tumor cell phenotype depends on the protective function of Hsp70 to fight cytotoxicity and therefore prevent apopto19. Hrrn has greatly expanded the research field of the Hsp70 system; the use of Hsp70 as a target has a great future, as it can be useful not only for the treatment of neurodegenerative diseases, but also for cancer treatments.