Exoplanets. Looking for similarities in space

In the last 15 years we have identified 600 planets outside the solar system. Only 25 years ago were known the planets of the solar system. In 1992 the first exoplanet was discovered. Now, in addition to identifying, experts have already begun to characterize some of them, that is, their nature and characteristics.
Exoplanets. Looking for similarities in space
01/09/2011 | Lakar Iraizoz, Oihane | Elhuyar Zientzia Komunikazioa

Kepler-11 is one of the great discoveries of the Kepler telescope, a system of at least six planets that revolves around a sun-like star. Ed. : NASA/Tim Pyle.

Extrasolar planets are called exoplanet and, as astrophysicist Enric Pallé of the Canary Institute of Astrophysics says, "at this moment, every day new exoplanets are found, I would not be surprised if within five years we knew 20-25 thousand exoplanets".

Most of the exoplanets that are known, and that will be known from now on, are gas giants like Jupiter and Saturn, "because, if not, they are more easily detected," explains Pallék-- in fact, the two-thirds of the planets we will know will be of this type of giants."

For Rafael Bachiller, director of the National Observatory of Astronomy, "it is not surprising that the first to be identified are the largest planets. Moreover, given that they are not identified by direct observation, but by the disturbances that affect their own star." That is to say, if when looking at a certain star there are measured incidents in its orbit or in its luminosity, it is interpreted that it has some planet around.

In fact, if a star has a planet around it, its force of gravity can attract the star and divert it a little from the normal orbit. In the same way, if a planet passes to the height of its star, it will give a lower luminosity due to the small eclipse caused by the planet, known in astronomy as transit. Therefore, the larger a planet is and the closer it is to its star, the more evident its influence on it will be.

In 2009 NASA put the Kepler telescope into orbit and assigned it no more work than searching for exoplanets. Kepler observes the transits and looks all the time at the area where the constellations of Lyra and Cygnus are located. In this way, it constantly analyzes more than 100,000 stars, if it ever detects any anomaly in their luminosity. The telescope has a photometer of almost one meter that allows it to detect changes of luminosity with a resolution of 1/10,000. For example, it would be able to detect the light drop emitted by 10,000 light bulbs if one of them went out. 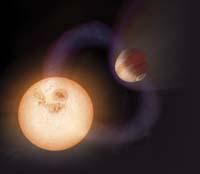 A giant gas planet (the hot Jupiter) that revolves around its star for ten hours. Ed. : NASA, ESA, A. Schaller (SISCI).

Kepler has not been the only mission that has found planets outside the solar system. Other missions and projects have made it possible to find the exoplanets known so far, such as AFOE, CoRoT, AXA and Spitzer. Unlike Kepler, they also make measurements and observations for other purposes. It is a mission that has required large investments and in which large capacity devices circulate. Therefore, "it is not feasible for an eight-metre telescope with a cost of millions of euros, for example, to refer only to a small area of space," explains Pallé.

For him, Kepler is, by his dedication, "the mission that more information is giving about exoplanets". In fact, he found 1,325 planetariums in the first four months he worked on. For the moment, most are only planetary, as they have not been able to confirm the decrease of luminosity measured by Kepler that has actually been caused by some planet or other phenomenon. However, experts predict that approximately 90% of planets will be authentic.

Although Kepler's goal is to find all the planets in the area, NASA has a special challenge with this project: It looks especially for planets similar to Earth and, as far as possible, that are at a suitable distance from the star to be alive (that is, that in case of having water, they can have that water in liquid state). In fact, experts in general claim that the ultimate goal of all exoplanet-related research is to clarify by scientific methods whether we are alone or not in the universe. And, for Enric Pallé, "ours will be the first generation with tools to answer this question." At the same time, they want to compare our planet with our solar system and see if they are rare or very common phenomena in the universe.

When they launched the Kepler mission, researchers thought that the best way to find Earth-like planets would be to look at sun-like stars. However, "one of the great surprises we have had in the study of planets outside the solar system has been to check that they can be around stars of all kinds, whether young or old, small or large, of great or lesser luminosity…", explains the astronomer Bachiller.

Not only have they had surprises in the types of stars that the planets have, but they have already found several planetary systems, that is, stars with several planets around, which have also seen that they are different from our solar system: "In our system we have eight planets, four of rock near the star and four of them far away, two of them gas giants. For in the systems found by Kepler there is everything: sometimes the gas giants are closer to the star, sometimes all the planets are grouped around it, sometimes more dispersed than ours, etc. explains Pallé.

The discovery of planets has sometimes led to the revision of theories about the formation of planets. Pallé gives an example: "Until they have been found, it was thought that it was not possible that the planets of the size of Jupiter were near their star. For they have found a giant gaseous planet near their star, less from the Sun to Mercury. Then they had to review the theories about the formation of the planets and now another theory is in force, that of migrations. It is believed that the gas giants actually formed further, but the disturbances in evolution have made them close to the star. If on the way I had found some smaller rock planet, I would have, so it is believed that if near a star there is a giant gaseous planet (known as hot Jupiter), there will be no rock planet in the area where there may be life." 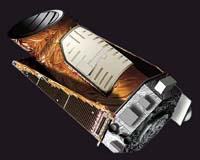 However, Pallé believes that "there is still a lot of space to find surprises; the exploration of exoplanets has only begun. Now what we are seeing is just the end of the izeberg."

Identifying planets is not enough for astronomers and astrophysicists. Knowledge of how these planets are is considered fundamental. And for this it is essential to look directly at the planets. This characterization of the planets also includes the clarification of the presence of living beings. "For this we look at the atmospheres of the planets," says Pallé. In fact, if there are living beings on a given planet, the atmosphere will have its traces, so the knowledge of the composition of atmospheres is considered as a way of searching for living beings.

However, by directing the telescopes to stars far from us, the light of the stars blinds and is not able to see nearby planets. Scientists have two ways to solve this problem. One, cover the light of the star by experimental methods that allow to detect the light reflected by the planets, and another, wait for the planet to pass before the star and then see the light that crosses the atmosphere of the planet.

However, these atmospheric studies cannot be performed through orbiting missions. As Pallé explained, "it can only be done from Earth, because for this purpose spectrographs are needed, and now in space there are only photon counters. They will be later, and then we will get better results from observations made from space. In short, the relationship between the objectives that are intended to be achieved and the investment that is made for this determines and delimits what results can be obtained."

Thus, when you want to find many planets, "the ideal thing is to go to space, since the changes of luminosity can be detected much more precisely, since the distortion that the atmosphere can cause is eliminated," says Pallék--. However, if the goal is to characterize the planets, we resort to planets close to stars very close to us. In this way, we get a lot of light from them, which facilitates the analysis of atmospheres".

A prosperous future ahead

Considering the speed at which progress is being made, Pallé believes that there will be great advances in the near future related to exoplanets: "I hope that in the 2-5 year period there will be at least one planet that can have life. That is, small enough to be rock and to be at a suitable distance from the star. Then, when looking, it can be a steel or diamond ball or, for example, a planet like Mars." 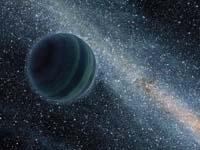 (Photo: NASA/JPL-CALTECH/R. Jan)
Experts still don't know if those objects that don't revolve around a star are actually planets. As Pallé says, "the greatest doubt there is about these bodies is how they have been created." Experts see two possible options. One is to create the planets as they are created, that is, to create around a star and then to end up out of the star system as a result of star and planet interaction. The other option is to create the stars as they form, that is, when a small gas cloud condenses.
Although they are like stars, being objects of small mass, they are not able to provoke nuclear reactions within them, so they cannot be considered stars. The name of the planet is also not entirely legitimate on the part of experts, since "normally the bodies created on the disk that surrounds a star and that revolve around it are called planet", explains Pallé.
The research of these objects, logically, is not intended to look for living beings outside the Earth. Pallé says: "They will help us better understand the origin of the planets. The models we will generate from the observations made will tell us how they occur, how often and where we can find the planets, if we can expect to find a rocky planet around these stars, etc. ".
Lakar Iraizoz, Oihane
Services
278
2011
Information
018
Astrophysics
Article
Services