Geothermal energy is the "energy obtained from the inner heat of the earth". The low and/or medium underground temperature (between 20ºC and 150ºC) can be used directly to heat buildings, while the high temperature (above 150ºC) is used to obtain electrical energy.

The Earth has an enormous heat reserve inside it: the geothermal potential accumulated in the first 10 kilometers of surface is 2,000 times greater than the world coal reserves. The average temperature increases by 25ºC per kilometer that we penetrate the earth's surface. In some seismic or volcanic areas, temperatures are very close to the surface and the use of this energy source is very simple.

Like other energy sources, geothermal energy has long been exploited. 3,500 Etruscan years ago used thermal waters to treat skin diseases, relaxation, building heating, acquisition of useful chemicals such as borax and plant cultivation. But leaving aside the thermal farms, XIX. Geothermia began to be industrially exploited in the 19th century in the Lardarello of Italy to produce electricity. It went into operation in 1904 and in the 1940s it had a power of 132 MW. Although the plant was completely destroyed during World War II, it currently produces enough electricity to supply more than 500,000 inhabitants, which means an approximate power of 400 MW.

How is geothermal energy exploited?

As already mentioned, thermal energy can be used by the exploitation of thermal sources through spas, etc. But it is taken into account when there is the possibility of generating electricity as an alternative energy or can be used for heating. 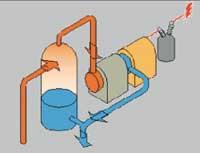 To generate electricity you need water vapor or hot water in the subsoil. When what comes out of the ground is water vapor, this steam is directed directly to the turbines to generate electricity. It is the simplest method, but not very abundant, as these types of sources are scarce. However, when the outlet through the pipes is hot water, first you have to separate the liquid water from the water vapor, then use the water vapor to generate electricity. However, the steam that will affect the turbines depending on the different water temperatures is obtained in several ways. In places where there is high temperature thermal energy, that is, when the water temperature exceeds 150-200ºC, the water is poured into tanks or tanks (see figure 1) and the steam generated in this process is used to power the turbines generating electricity. The water generated in the process is reinjected into the subsoil. This type of plant is located in Italy (Larderello), New Zealand, Japan, the Philippines, the United States and Mexico.

When the water temperature ranges from 70 to 150-200ºC, it is called Thermal energy of medium temperature. In these cases, hot water is used to evaporate through a heat exchanger (see Figure 2) another more volatile liquid, which will be used for turbines. Also in this case, the water extracted from the soil returns to the subsoil. 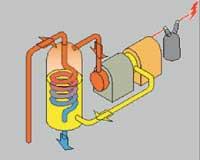 In fact, the temperature of the subsoil is very constant and is used to cool the water that circulates through the subsoil crossing the pipe in hot areas during the summer, especially in the USA.

However, these energy acquisition systems have a number of limitations and barriers: on the one hand, it is only possible to drill down to a depth of 3,000 m to make the operation economically viable. On the other hand, installations for the production of electricity or direct use of heat must be close to the source, as heat is lost along the way.

Today geothermal energy is expensive and in countries where the structure of the Earth's crust is appropriate for this, as in Iceland, it is not exploited, but as the technique progresses this type of energy offers more possibilities. From the environmental point of view, this energy source does not present great problems. 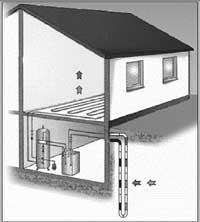 In Europe (Hungary, Bulgaria, Slovakia, Romania, Poland and the former
Yugoslavia) they use water at about 80ºC, mainly in swimming pools, greenhouses and spas. In Hungary 80% of greenhouses use hot water. In France (Paris and Aquitaine), more than 200,000 households use water at 45-80°C to
heat. Belgium, Germany, Denmark, the Netherlands and the UK are testing systems similar to the French. In Iceland, geothermal energy was the second source of energy in October 1997. Then it produced 49.4 MW·years. Currently, however, 140 MW·years. 85% of households are heated with geothermal energy and hot water is used in bathrooms, greenhouses, fish farms, land warming and industry. In the capital of 145,000 inhabitants, Reykjavik, all houses have buried hot water at a lower price than cold water. It
should not be said that in the latter country they have special conditions
and possibilities for the use of geothermal energy. 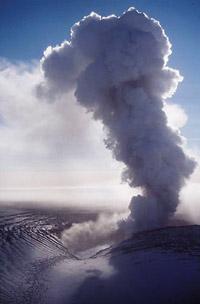