Within the embryo transplant technique

Laboratories in the most advanced countries have long begun to study genetics. What was once science, today has become almost industry. The scope of work is broad. Although in the beginning the plants were adapted by this technique, the animal world is currently in full swing. The sound of this technique has also reached Euskal Herria. Karlos Ugarte, a worker at ABEREKIN, is one of the best specialists in embryo transplantation in dairy cattle. “Elhuyar. In number 21 of “Science and Technology”, Joxe Etxezurieta informed us about ABEREKIN and genetic improvement. In the following lines the conversation with the veterinarian Karlos Ugarte will be announced. Genetics and humanity

Elh. : Hello Karlos. Do you introduce us?

Artificial vagina to collect the seed from the beef.

U.E. : I am from Agurain. I finished my veterinarian in 1985 and with a scholarship granted by the Basque Government at INIA in Madrid (Instituto Nacional de Investigaciones Agrarias) I worked in quantitative genetics until February 1986. From there I went to an artificial insemination center in Canada and participated in a stud show program. I started in embryo transplantation. I came for five or six months to start a cow show program. Then I returned to Canada and was at McGill University. There I worked in the field of quantitative genetics and then spent two months at Québec's artificial insemination center dedicated to embryo transplantation. Finally, in August 1988 I joined the ABEREKIN staff.

Elh. : What is embryo transplantation and what does it have to do with genetic improvement planning?

U.E. : Normally, a cow can give a child each year. If that cow is suitable for milk, for example if it is genetically good, it is advisable to expand its good characteristics to the maximum. But, as I said before, because only a child can give each year, it does not seem that a great diffusion can be achieved from the natural path. However, if the embryo of this good cow is transplanted to other cows and the generation born here achieved these good characteristics, we would find ourselves in the right way. This is what we are doing or what we want to do. In other words, we want to improve the dairy cow breed of Euskal Herria to get more and better milk. In this process the donor cows are cows with good genetic properties and are those that will give embryos.

Receiving cows serve as leased mothers. They integrate the embryos extracted from the original mother. Therefore, these cows put their uterus in order to develop the embryo.

Elh. : Could you tell us the steps to follow in embryo transplantation?

U.E. : First, the donor mother undergoes superovulation treatment. If a cow normally gives a periodic egg, after a superovulation treatment it has between 10 and 20 units. After seven days of artificial insemination of these eggs embryos are collected. These embryos are integrated in the receiving mothers, on which the entire gestation will run. The calf thus born will be genetically the same as the donor mother and, of course, the same as the father who gave the seed. 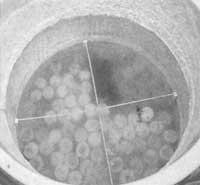 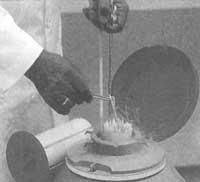 To be a receiving mother, in principle any cow is worth it. However, some (French for example), in their eagerness to propagate their cows, give the reason that some recipients are better than others.

U.E. : The cow joins a soup. Not because it will hurt, but so that nothing will move. The front legs rise between 10 and 20 cm. A catheter is inserted through the vagina and carried to the branches through the neck and uterus. Then the branches of the uterus are cleaned. A special liquid is used for this purpose. This process lasts 15-30 minutes and consists of the administration of epidural anesthesia (that is, of the genital part) to prevent the cow from strengthening. Of course, the person using the catheter should have a good hand to prevent injuries.

The next step is to look for embryos in the received fluid. Just look at the bottom of the liquid, as the embryos fall to the bottom by gravity. Once the search is started, the embryos are well separated from the unfertilized eggs, but it is also necessary to differentiate between the embryos.

Only 7 day embryos are taken, as seven days have passed since fertilization. Embryos of two or three days have been discarded because they are dead. An average of 10 embryos per turn is obtained. One of these embryos is very good, four or five good and the other regular or bad. The very good embryo freezes and the good ones are used for embryo transplantation simultaneously without freezing. The quality of an embryo depends on physical characteristics such as the formation of the outer membrane, the intercellular space, etc.

Elh. : Have you frozen the embryo? How long do you freeze it and how long?

U.E. : Embryos are frozen in different phases and finally stored in liquid nitrogen at -196ºC. If they freeze well, they theoretically remain forever.

Elh. : We know how embryos come out, but how do they integrate?

U.E. : If the embryo is frozen, it must be tempered.

The receiving cow must have passed the recovery seven days in advance. An embryo is inserted through the catheter as a deep insemination. At ten days this embryo sends several messages to the cow's brain and is fertilized.

Elh. : Is the genealogy of Euskal Herria cows known? 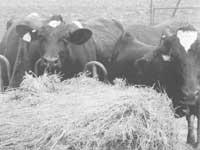 These cows will have to give more milk. Therefore, some features need to be improved.

We are now detecting good bulls. Since their Canada they have been brought and we are testing some good bulls. This year, at the end of the year, we will know the balance of these tests. A bull has a genetic extension greater than a cow, since they do not move from the place where the cows are and, on the contrary, the bull seed can be carried anywhere.

Elh. : Artificial insemination, embryo transplantation, … Could you tell us when each of these techniques is used and what is the difference?

U.E. : It is clear that artificial insemination has notable advantages over natural coating. From each ejaculation you can prepare between 400 and 500 doses. So every week between 800 and 1000 doses. The multiplication factor is enormous.

As of 1992, it will not be possible to bring beef from the USA or Canada. Therefore, the ways to introduce a good genetic material here are that of the seed and the embryo.

We will buy very good quality embryos and incorporate them into our cows. The males thus born will be destined to the center of artificial insemination, in order to create a seed bank and be able to initiate genetic expansion.

Elh. : So do you want to turn Euskal Herria into a focus of genetic expansion?

U.E. : Yes, we have studied the genetic index of all cows. In the genetic improvement program we will use only the best tested cows.

Elh. : What is your goal with the genetic improvement program?

U.E. : All improvement programs aim to improve the economic profitability of a farm. We will try to improve the quantity and quality of milk. For this it is necessary to improve the physical characteristics of the cow and extend the life of the cow. In order to pay what a cow eats, it has to live at least four years. From there the benefits begin. In Euskal Herria the cow is sent to the slaughterhouse at approximately seven years. In Canada cows aged 14 to 15 are in very good condition. We want to get to this situation.

It must be said that initially embryo transplantation was aimed at obtaining meat. However, the results obtained have not been expected and at this time the trend is to improve the dairy cow. In fact, 80% of farms in the European Community are dedicated to milk.

Embryo transplantation is not a completely new technique. A few years ago it was used in many places in Europe. However, since the steps to be taken to obtain good results of this technique must be well given, for the whole process to fail it is enough to take a wrong step. This is what has happened in many places. Therefore, at this time only a few centers remain worldwide and are normally attached to artificial insemination centers.

Elh. : What are the steps you have taken so far in ABEREKIN?

Canadian bull Glen Vic. This is a richer stallion bull and is considered "very good".

U.E. : In material we are well equipped. We have acquired a traveling laboratory for embryo transplantation anywhere. This laboratory includes microscopes, refrigerators, catheters, etc. has them. So far we have been experimenting, but right now we are ready to move to the market. For this we have hired two veterinarians.

Elh. : Do you expect markets?

Elh. : What for the future?

U.E. : If you expect any possibility in genetic matter, the reality becomes very fast. If today, for example, whole embryos are transplanted, researchers have managed to divide these embryos into 2, 4 or 8 fractions. Therefore, the genetic extension will be much greater.

Elh. : To end Carlos, what similarity is there between what you work and the human?

U.E. : As you will think, we are cows and mammals. Therefore, almost everything that can be done with cows can be done with the man. If you want to get a blonde boy, with blue eyes and 1.85 m high, no problem. You can also get a person who thinks little but has a lot of strength to work. You can do whatever you want and I wouldn't say it hasn't been done. The only limitations are ethical, but as there are many ethics…