Elhuyar magazine was born in 1974 together with Elhuyar. It was a small yellowish brochure with which the creators wanted to take steps to talk about science in Basque. Elhuyar magazine disappeared in 1996 and we have now retaken and networked all the work and efforts of those years.

The Elhuyar Foundation has put on the internet the numbers of the magazine Elhuyar between 1974 and 1979. The works of then we have received them as they had been created, since they can be printed, saved or simply view and analyze the numbers themselves or select articles. Journals and articles can be consulted at http://www.elhuyar.org/elhuyar_aldizkaria and at www.zientzia.net. 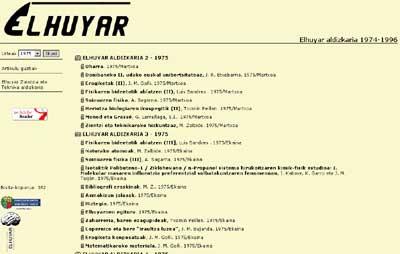 The contents of the journal can be consulted by articles. In PDF format.

However, the heritage of Elhuyar was greater, and our other magazine, which was the pioneer of the current magazine Elhuyar Zientzia eta Teknika, we got to work on the network. In that magazine were collected some of the first efforts for the development of the Basque language in science and the dissemination of science in Basque, so we consider that it can be a perfect tool to know the situation of 30 years ago and where we leave.

Through the mouth of the creators

"The fact that almost everything is done in Basque culture is something concrete and lamentable. As soon as we leave the atmosphere of kitchen and friends, we leave the dark paths, sometimes the Basque language is shameful. (...) In scientific matters, in particular (...) we need rich dictionaries, which include the whole field of concepts, but that is not enough.

If we are going to build a science-euskara, we all have to agree, taking a habit of using the topics, creating a large number of people who have that custom, combining the formulation that any scientist from anywhere uses with the Basque language, without one violating the other, etc. (...) For the Basque language to go out to the Science Square, we have to prepare scenarios so that its creators can show us how it is and that we can all help them to create more and more mature, more appropriate, more decorated." (…)

With these words the magazine Elhuyar began in September 1974. As Luis Mari Bandrés, one of his founders, wrote a few years ago, "that which was an eye of today, simple and humble, but which for us was an enormous achievement." For Elhuyar today, in addition to achievement, it is a treasure and for it not to be lost, you have it on the net.