The energy department of Ikerlan, Domolab, domotic building, opened yesterday in the technological park of Miñano. The house is a two-storey building, has 180 square meters and is not much like the houses that look here. Unlike the rest of the households, the biggest differences occur in appliances, security systems and the energy use system.

No one will live in Domolab. As its name suggests, it will have the function of laboratory, since Enerlan, the energy department of the Ikerlan technology center, will use it for research. 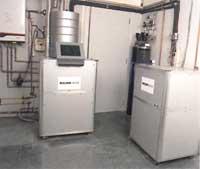 All existing automation functions in Domolab are related to each other. In fact, home automation is, in short, the integration of automation functions into a single system. The advantage of this integration is that a single installation is needed, that the user learns the operation of a single system, that the user relates to a company and a technical support system, and the most important thing is that when all systems are integrated the service is more optimized. For example, when the anti-theft system is launched, the home automation system can understand that the house has become empty and lower a few degrees of temperature, while saving energy.

In the home automation of Miñano the core of the integration of appliances, heating, security equipment and communications is the Domo Mayor, a device that controls and monitors household appliances through the phone. To give orders, the Domo Mayor uses the electrical installation of the house, but can use another medium, such as radio waves that are being investigated at this time, so it is not necessary to perform new installations. The system is completely modular, that is, the user chooses the devices and applications that he wants to introduce in the home automation network. The user can enter some element in the network and exit it as it is programmed easily.

To supply energy to your home, while conducting research on renewable energy, they use fuel cells and solar panels.