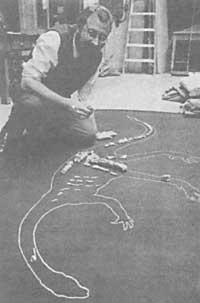 Primitive vegetarian dinosaurs were able to survive by running away their carnivorous enemies. Recently the oldest dinosaur skeleton known at the California University of Berkeley has been rebuilt. Gertie's legs (which bears the dinosaur) were very long. Robert Long, a Berkeley paleontologist, says "Gertie was at full speed."

In the Arizona Cobbled Forest National Park, the fragments of Gertie's skeleton were on the rocks. Last summer the remains that left the park were transferred to Berkeley for study. In recent months Berkeley paleontologists have been distributing the bones of the rock. Furthermore, Herie's bones have been invited with some of his contemporaries. As a result of this study, for the first time it has been possible to join the different bones together and discover the appearance of the animal.

On the other hand, at the time when Gertie lived, 225 million years ago there was a little up and down, the continents were united and the territory of Arizona was 2,500 km closer to the equator.

The facts weighed about 67 kilograms and had a length of 2.4 meters and is believed to be a pioneer in brontosaurians.