It has also become custom. Elhuyar of the last four years. Just take the February issue of Zientzia eta Teknika magazine, that wise reader will know what we are talking about. We do not award the Nobel Prize, nor the special prizes for the scientists Helena Rubinstein, which have been awarded for the first time this year. But over the years, our awards have also echoed in the Basque scientific community. And that is precisely what we want you to explain in the pages that follow, with words and images. The 1997 CAF-Elhuyar Outreach Awards were announced on 16 January. This year the call has reached the fourth edition.

As usual, the award ceremony allowed us to bring together friends and colleagues. In the restaurant Txzain Beltxa in Lasarte-Oria we gathered more than a hundred people to taste the delicious pintxos of Pepelu and his companions and to congratulate the winners of this year. After the brief event we had the opportunity to do so.

A four-year tour, for which we are organizing the CAF-Elhuyar Awards. Four years, it is true, enough time to judge the impact of a prize. But, as Inaki Irazabalbeitia, president of Elhuyar Kultur Elkartea, said in his speech of entry, “scientific dissemination in Basque has gradually reached its level; the results of the work carried out over the years are those that are being published thanks to the prize”.

The contest began four years ago, promoted by Elhuyar Kultur Elkartea and subsidized by the company CAF Beasain. The aim was to create an appropriate forum for professionals working in Basque, both scientists and journalists, to publish their work. In these four years nearly 100 people have participated, publishing articles and books. Elhuyar also before the contest. Many good writers have been trained in the magazine Zientzia eta Teknika, every month and without missing — eskerrik asko! — that have brought us clearly and simply the different aspects of science. Without them, this magazine that you have in your hands would hardly reach its number 128. But for the new writers it is more difficult to get this first experience, in which it is precisely formed. In order to fill that gap, the prize was created: “provoking” new writers. Let us first clarify who the new writers are: those who have published less than five articles in our magazine or none. 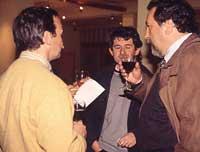 The dissemination in Basque has had to start running without having time to learn on all fours. Throughout the tour we have trained writers, readers and the language itself. In a few years, in fact, Euskera has conquered areas that until recently were completely strange and among them, of course, scientific disclosure. The authors have dealt with scientific issues with great precision. They have enabled the same language; today it is not so difficult to find Basques who can write on any cutting-edge scientific topic. Science and technology are the fundamental pillars of modern societies; outreach is also an important part of universal culture. And that is already done in Basque with total normality and naturalness. To some extent, such initiatives are due to the ability of the language itself. 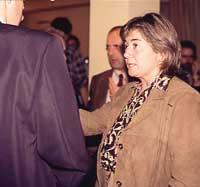 The awards are presented to you, the fans, readers, friends and collaborators of Elhuyar. To date, since only the members of the jury know the honor list, which met at the end of December at our offices in Usurbil and has remained silent until the awards ceremony.

According to this year's call, two levels of work have been presented to the awards. At level A we have collected articles of general disclosure and at level B of Urbanism and Economy and Enterprise. This last award is the most outstanding novelty of this year. As Jose Mari Rodriguez Ibabe pointed out in the act of delivery, “the work being done in this field is increasingly important. Formerly we distinguished science and technology completely, but today they go hand in hand. The business, economic and urban areas for the development of this country are increasingly important and we have to collect those works in our language, the Basque language. The Basque language must also cover these areas.”

lV of scientific disclosure. Results of the awards 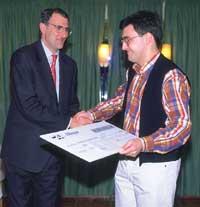 Subject: Cacyreus Marshalli: the butterfly that has eaten or eaten your geranio.Author:
Santiago Pagola Carte
(San Sebastián) Suitability and correction of the exhibition. The interest that the themes of nature arouse among us is consistent, freshness and intelligibility have prevailed, not to the detriment of correction. It exposes possible imbalances in smaller areas against globalization, highlighting the limits of its resolution. The approach of the subject is excellent, perfectly linked from beginning to
end. Cacyreus Marshalli is the butterfly of the South African Republic, but since summer is quite known among us. For unknown reasons, it has reached our territory. Unlike the place of residence, it has shown us a huge force, in some cases becoming a pest. The article analyzes the characteristics of this animal, its expansion routes, the causes or hypotheses of its behavior and the possible future consequences of the epidemic. 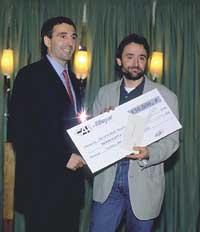 Subject: Shirt, cereal, zitu or cereal Author: Gerarta
Iñaki Arotzena
Otxotorena (Aizarnazabal) Decorative clothing and elegant base of presentations and images. It offers extensive information and makes contributions from different disciplines. The author has brought us a short and complete collection of
yours. Cereals are more than just food. This has been throughout history and, as the article shows, has also been the driving force of civilizations.

The art, progress and development of some societies and their permanence today are partly due to cereals. The author analyzes in detail its evolution throughout history and its characteristics and use. 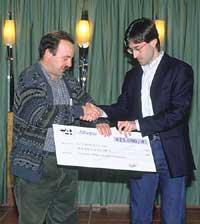 Subject: Clone Thoughts>Author:
Jon Umerez Urrezola
(Donostia-San Sebastián) The news is total. The author has compiled the trials carried out to date and has made a detailed, interesting and easily understandable description of biological
cloning. The first months of last year we were looking at a sheep; those who knew nothing about genetics realized the importance of this step. However, is everything said in relation to this fact necessary? The author analyzes throughout the article an endless number of questions, showing the advantages and risks that biotechnology offers today. He has described the steps that constitute biological cloning and has not given up giving his opinion on the possible human cloning that has been present these days on everyone's lips. 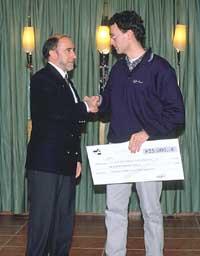 Subject: Hunting conservation instrument?Author:
Santiago Larrañaga
Arrizabalaga (Azkoitia) Today is an issue that never loses; groups that are in the opposite extremes can be a meeting point for the realization of enriching debates; in addition, without remaining in a simple causistic, he very clearly exposes some general theoretical models.
In this work the author argues that good hunting management can be a useful tool for conservation. In principle, conservation and hunting are two extremes that are not known to each other, but the article shows us the ways of convergence of both, with concrete examples. 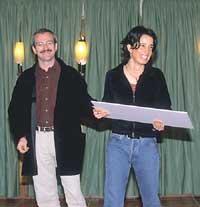 Subject: Are we able to harmonize the environment and the company?Authors:
Lorea Gabiola Anakabe (Lekeitio) and Leire Barruetabeña
Oregi (Getxo) When we talk about total quality in an industry or workshop, we say more than the quality of the manufactured products; the environmental behavior of this workshop is increasingly important. And this article analyzes the environment and the company, explaining clearly the inspection and management systems that are used at the moment. Given the importance of the subject and the suitability of the authors' treatment, the jury has taken into account to award this special
award. Environmental management is an increasingly heard concept. Behind this there may be different philosophies, but they all coincide in the basic factor: environmental protection is a business task. From a concrete experience, the authors have shown the obstacles that environmental management systems can find in companies and have resorted to the elaboration of proposals, obtaining really interesting models. 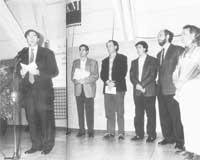