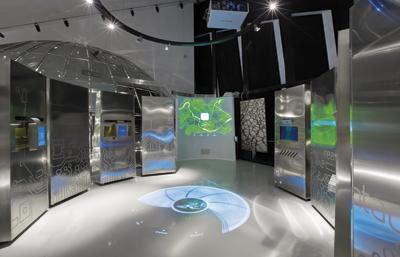 The BTEK Technology Interpretation Centre is unique from the outside and from the inside. From the outside recalls the logo of the Technological Park: they are two pyramids, placed together and communicated underground. The building is receiving important architectural awards, including the Best Cultural Building 2009 in ArchDaily, the most visited architecture website in the world.

But the interior of BTEK aims to surprise and attract visitors as much as the outside and invite you to enter through music. Thus, the exterior melody accompanies the visitor along the entrance and in the first room. The melody itself and the aspect of the entry passage indicate how the environment is: contemporary, technological, but not cold. And in this environment, the visitor has at your disposal different elements to play and experience.

Because BTEK is not a museum, it is an interpretation centre. This is explained by Xabier Diaz, director of BTEK: "Despite being a showcase of the technology that develops in the Park, in the Basque Country and in the world, it does not want to explain the history and evolution of technology, but to encourage visitors to participate so that, through the experiences, they are aware of what is behind these technologies."

In Díaz's opinion, it is important to show that the technology created here is comparable to that of other countries considered to be pointers (North Europe, United States...) and that people in their environment have the capacity to do this kind of thing. With this, it aims to awaken curiosity for science and technology and foster vocations. In fact, BTEK is especially aimed at young people, and thinking about them they have created content, aesthetics and language, both verbal and graphic.

However, the centre is open to people of all ages, with the intention of hosting other activities such as artistic actions, exhibitions, presentations, conferences, courses for students and teachers. In this sense, the director of BTEK is fully open to applications. In addition, Díaz recognizes the obligation to follow closely the paths through which technologies run in parks and in the world: "As some technologies are left behind and new ones are developed, some elements or complete areas must also be changed."

From ideas to modules 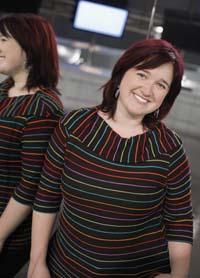 The responsible for creating and shaping its current content has been Aitziber Lasa, of the Elhuyar Foundation. Lasa defines the creative process with the words challenge and collaboration. The challenge, because Elhuyar has not done so until now, and collaboration has been based on collaboration with experts from all fields from the beginning to the end of the process.

In this way, it was decided in group that, in addition to a specific space to reflect the work carried out by researchers in the park and its surroundings, BTEK would have other spaces to work on topics such as the Internet and the digital world, nanotechnology, robotics, biotechnology or sustainability.

Another important decision was the creation of a specific model for BTEK. "We saw many models and realized that none of them served us," says Lasa. They were, for example, at the Museum of Science in London and the Museum of Natural History, and they saw how to communicate to the public scientific issues and provoke a debate about them. They also visited the science museums of Paris, but some seemed quite traditional to them.

When they traveled to the United States they met "other kind" museums. They were present at the MIT Massachusetts Institute of Technology Museum and at San Francisco's The Tech and Exploratorium Museums, among others. At The Tech they had the opportunity to see the most advanced technology supports and resources. For its part, the Exploratorium was a pioneer of the Hands on model, that is, they were the first to propose interaction and experience for the acquisition of concepts. 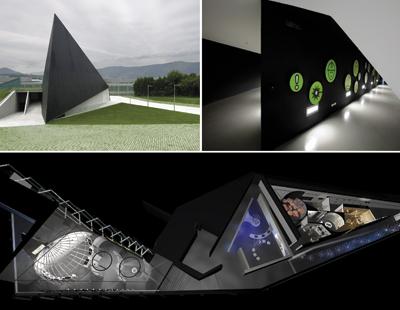 The architect is Gonzalo Carro of ACXT. The Best Cultural Building of BTEK 2009 has been selected in ArchDaily, the most visited architecture website in the world. In addition, he has obtained honorable mentions at the São Paulo Biennial and at the AR Awards awarded by the prestigious Architectural Review. Ed. : Aitor Ortiz. Info : Ainhoa Villamonte.

Play and reflect on it

The BTEK model focuses on the cutting-edge technology that is developed in the environment and in the researchers working in it. "We want to put young people in their skin to live the entire process of technological development."

All this in the most entertaining and playful way possible. "However," details Lasa, "BTEK is not a theme park at all. It is an interpretation centre that must have added value." An example of this is the space created for reflection and debate. "There are issues like biotechnology or nanotechnology that generate social debate. But all technologies, in addition to opportunities, generate risks. In this space we are looking for visitors to think about all this."

Outside of this space, together with the tools of interaction and game, there are elements that stimulate reflection in all areas. In the module called "Latidos del mundo" it is very clear. In it, through special maps that surround the visitor, the differences between countries and others in the production and consumption of technology, health, education are revealed... 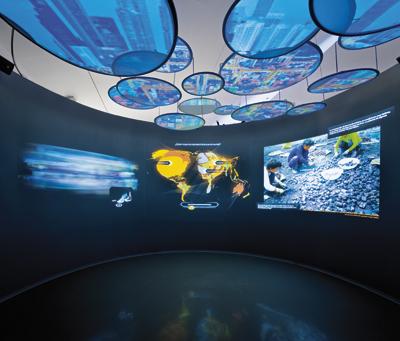 In the module called "Latidos del mundo", the differences between countries, in the production and consumption of technology, in health, in education, etc are highlighted. Ed. : Aitor Ortiz.

In another module, in the field of sustainability, young people must choose a role (political, consumer, businessman...) that allows them to see the consequences of the decisions taken accordingly. According to Lasa, "we have taken into account that young people who come to BTEK are part of society and who will soon be adults and have a social impact. That is why we want them to know technology, but in all aspects, that they will then be able to make decisions and realize that we are all building this world."

Work based on communication

To do this, they formed a solid working group. In particular, the scientific informers of the Elhuyar Foundation, the museographer Pau Senra and the interior designer Ainhoa Villamonte have collaborated with Lasa. Among them they have decided what to count and how, what tour visitors are going to do, how to dosage and how to give information, what questions to generate, where, when and how to raise them... Despite this, Lasa praises the rest of the staff that has participated in the interpretation centre: "We have all learned from all."

In addition, it highlights the technology used in the realization of the modules. According to him, participating companies have had to do R&D to create elements such as the Black boxes module or robots.

Precisely the company YDreams has been responsible for creating the aforementioned Black Boxes. This company generates interactive software and has a great experience in the realization of modules for museums and interpretation centers, among which is its participation in the Lisbon Oceanarium. In the case of BTEK, it has prepared twenty-one facilities.

According to Sérgio Cardoso, responsible for YDreams contents, it has been a very dynamic work. "If you compare the first project document with which we have finally elaborated, it is clear that there have been changes. In fact, there has been a constant communication between our team and Elhuyar, and together we have been adapting the initial ideas. Although the process has been long and complex, we are very satisfied, both with the way of working and with the final result." 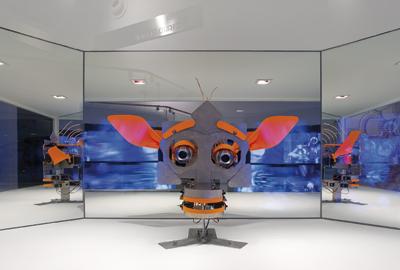 Innovae Vision is the founder of Kixmi for BTEK, the robotic head. Kixmi is able to invent what visitors think. Ed. : Aitor Ortiz.

Innovae Vision has also used cutting-edge technology. This company specializing in interactive communication has created four elements for BTEK, two of them for the robotics area: a robotic arm that portrays visitors and Kixmi, the robotic head. The latter has been a great challenge recognized by the director of Innovae Vision, Pablo Ayala. Kixmi challenges visitors and, through a game, discovers what they think. As Ayala explains, "we have made a huge effort, because we wanted us to be able to transmit emotions when speaking."

In the end, he is proud of the result. "We now know that the technology we've developed works. The next step is to confirm that it meets the goal, that is, that visitors have fun and learn."

BTEK with all the senses 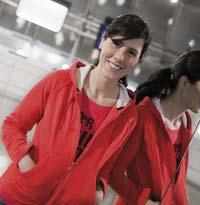 Ainhoa Villamonte interior designer. Ed. : Aitor Ortiz.
"As we enter BTEK we want the visitor to feel in another world." This is what Ainhoa Villamonte, BTEK interior designer, says. Before being part of BTEK's working group, Villamonte has set up clubs, theme parks and shopping malls, an experience that has served him to achieve a fun and entertaining aspect of BTEK. He has also worked as an interior designer in other interpretation centers, but, in comparison with them, he acknowledges that BTEK has been different, "because I have been here from the beginning in the work team, from the first moment in which content began to arise, and have gone together his creation and setting".
Thus, each area is set to benefit the content, in order to facilitate the assimilation of concepts to visitors. To do this, BTEK has used various elements, especially light, music and key visual elements. From the entrance you will notice. In the words of Villamonte "nothing else to enter, the music impoverishes you and invites you to die". The soundtrack wet by BTEK has been developed by the companies YDreams and Indigo.
Besides the music, the visual elements help to internalize: in the passage the key elements are the 0 and 1, that is, the symbols of the digital world, and in the first room you can feel the visitor as inside a computer. This space explains how computers and the Internet network work. 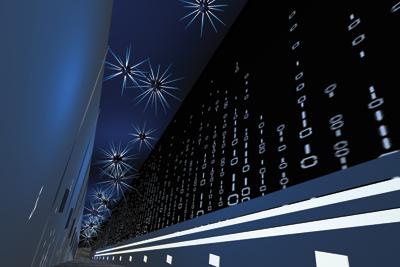 Ainhoa Villamonte
Well, as specified by Villamonte, the interactive modules that explain this content are not organized in the same way: "We placed them in a circle to give it an organic touch. In fact, the materials used for the manufacture of computers, computing and modules are also cold. But all this technology has been created by people who use it and one of its uses is communication. We have organized the modules to transmit them, using round shapes and mirrors".
By fields, the environment is changing, always with the content, depending on the content. For example, as the field of nanotechnology is accessed, the scale changes: the elements of the environment increase and the visitor feels small. It is in the world of the little. In the field of biotechnology, on the other hand, some neuron-shaped lamps are the ones that biological.
"In addition, we have created all these elements using the most advanced technology", highlights Villamonte. In the interpretation centre of BTEK technology it could not be otherwise.
Galarraga de Aiestaran, Ana
Services Services Services
265 265
2010 2010 2010 2010 2010 2010
Security security security security
016 016 016
Museums Museums Museums Museums Museums
Article Article Article
Services Services Services