The new Parietec concrete block has won the gold medal at the International Exhibition of Inventors Geneva. The reasons for this have been fundamentally two. On the one hand, with this new block, the walls of the buildings are easy to build, and on the other hand, there are no fungi and other germs harmful to moisture and cracks. 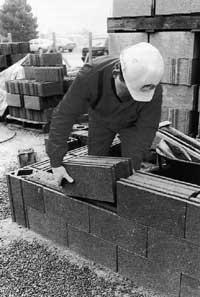 The Parietec block consists of two air chambers. Steel bars can be placed on the channels.

The block called Parietec is characterized by having an air chamber on both sides (exterior and interior). The block has a compact central area and on both sides a plate behind the air chamber. This way the wall is ventilated inside. The outer and inner plates are glued to the compact area in the center of the block and not in all its extension.

The outer plate is somewhat higher than the compact central zone and does not reach mass. It serves to locate the block and as a guide to the wall. It should only be placed in a compact area of half mass, with the upper block mounted to simple pressure. Half of the conventional system is needed when it is embedded with these blocks in mass, and enough time to build the wall is half.

The two air chambers that protect the central area allow water and moisture not to cross the wall and are two anticapillary barriers. The wall is therefore drier and more insulating.

The dimensions of this new concrete block are 20x20x40 cm. Therefore, once revoked, a wall is formed that works in double partitions to 25 or 30 centimeters thick. In addition, the cost is reduced by 30%.