Betizu, the last wild cow in Europe, to extinguish?

Betizu is an indigenous bovine breed of thousands of years that is in danger of extinction. 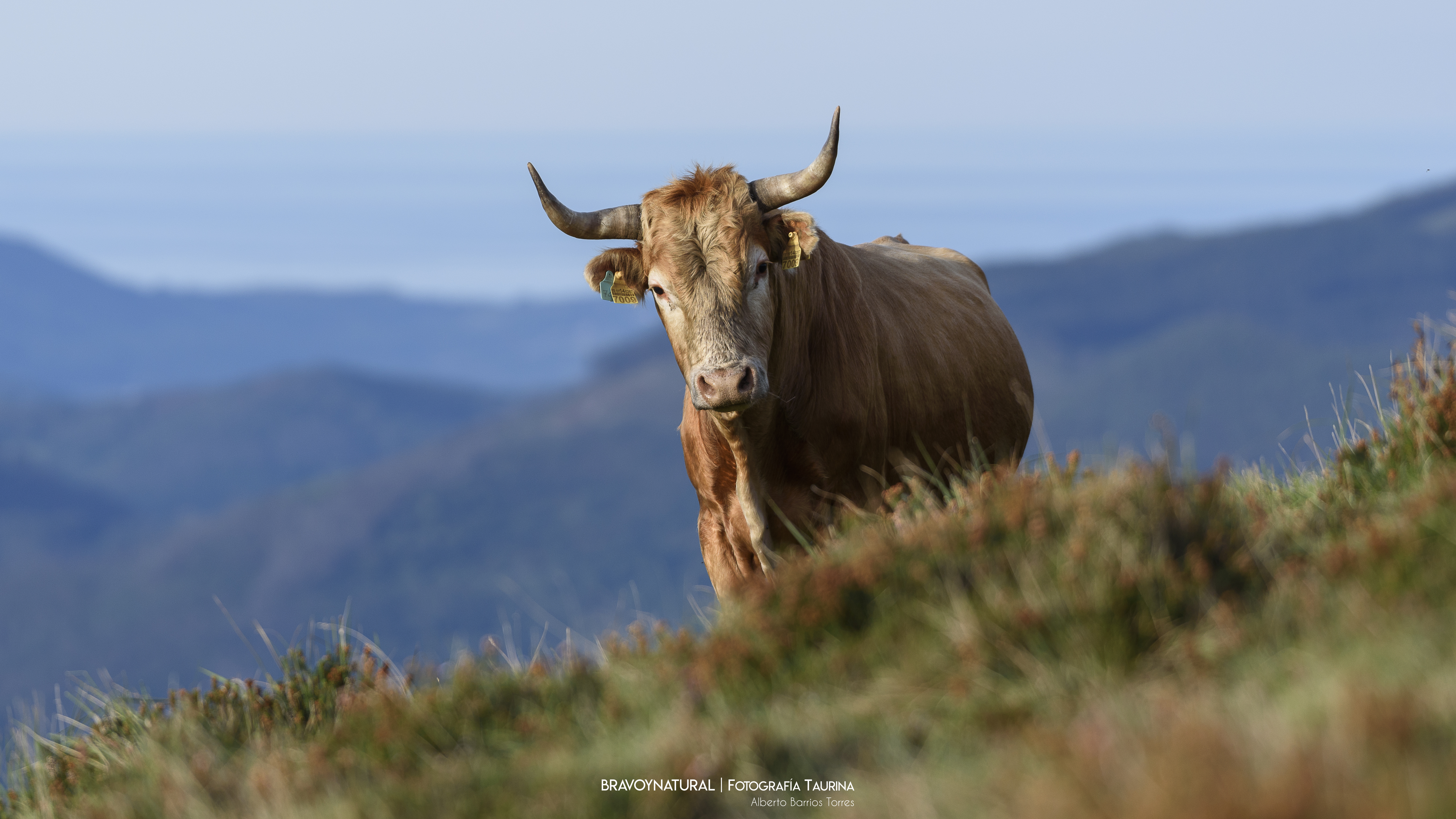 Betizua is a cattle breed adapted to the rugged orography and humid climatology of the Basque Country that has survived for centuries. These animals are an economic complement to the baserritarras and have allowed extensive and sustainable livestock. In addition, they have contributed to maintaining a wide biodiversity of native species. However, the animal population present in mountains, forests and grasslands has decreased as a result of the ageing of the rural population and the disappearance of the traditional socio-economic and environmental environment. Hence the need to make known the delicate situation that the race lives for society to value this heritage and that these animals integrate into the rural sector, nature and the extensive economy, which leads them to remain in so many centuries.

According to José Miguel de Barandiarán, the red bull or the betizu has been mystified since the Paleolithic. In Laminazilo de Isturitz, the cave of Sara, Akelarren de Zugarramurdi and other caves have been found engravings and paintings depicting “red bulls” (Barandiaran, 1969). In Basque mythology, the red bull or the red cow appears as a mythological being, patron of the caves of the goddess Mari (Barandiaran, 1994).

XIX. At the beginning of the 20th century, many autochthonous races improved and introduced more productive external races in the Basque Country (Altarriba and Aranguren, 2003). Then, the economically more profitable livestock groups began to be distinguished from the less productive (Echevarría, 1975), marginalizing the latter to the high mountains and geographically more isolated areas. This differentiation and genetic isolation have allowed the survival of betizu.

Today, betizu are located in the main mountain areas of the Basque Country and are found in all other provinces except Alava and Zuberoa: Navarra (Bernez, 2010), Gipuzkoa, Bizkaia (Gómez, 1999), Lapurdi and Baja Navarra. 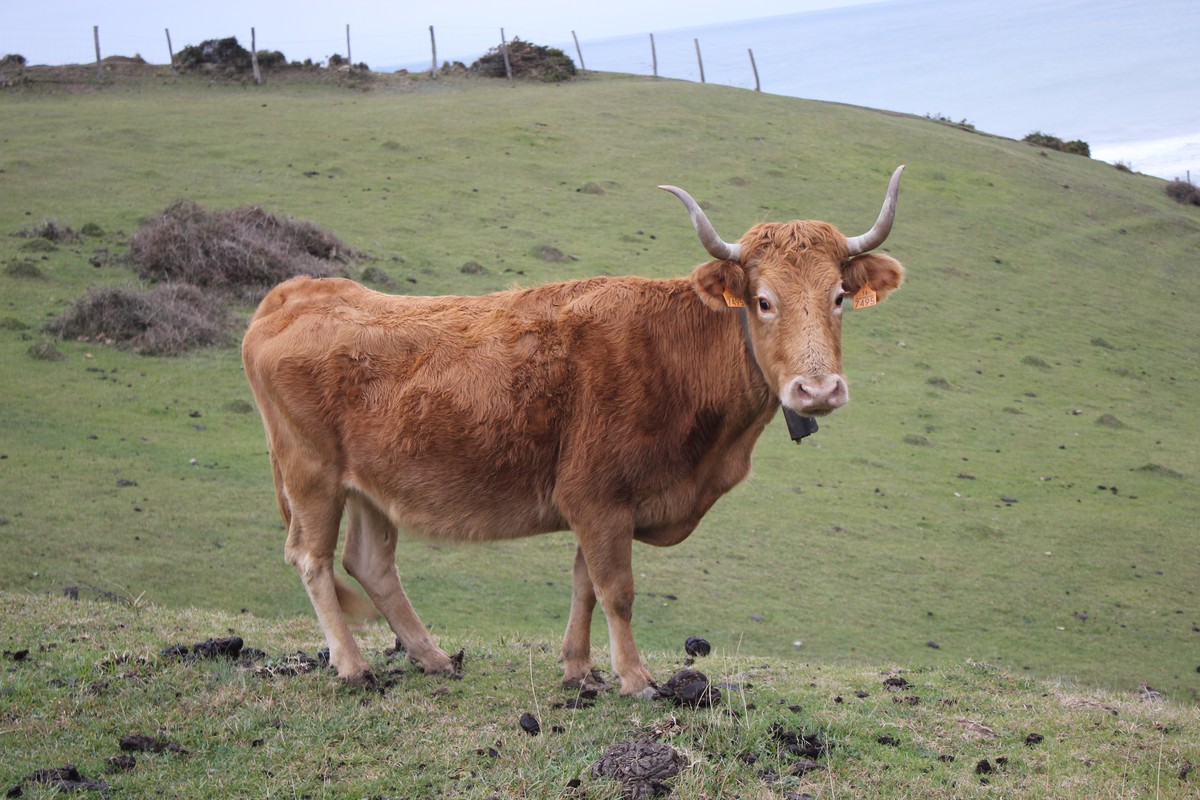 Betizu is one of the few cattle breeds that inhabit totally loose or semi-free (Pérez de Muniain, 1999). From there comes surely the word Betizu, which comes from the union of cow and terror (Gómez et al., 1999). Until recently control over these animals was very scarce. The owners tried to capture animals from time to time, with the help of shepherd dogs and maturation, to remove the calves and release them for their family consumption or at popular festivals (Barandiaran et al., 2000), for example. Since animals retain their old flammability, they continue to be used in numerous areas of the Basque Country in popular bullfighting festivals such as bulls, clipping championships, sokamuturras, etc.

They are live animals, light and very rural, with a large and thin head, expressive eyes, somewhat salient and surrounded by a clear halo (partridge eye). Its branches of early development, crescent-shaped, with yellowish tips. Its size is elongated, its height, its low muscle development (Pérez de Munia y Gómez, 2009) and its late development, so its meat production is very reduced. They are wheat colored. The cows have very little milk production, only necessary for the growth of the calf, and live between 13 and 14 years (Napal and Pérez de Muniain, 2006). 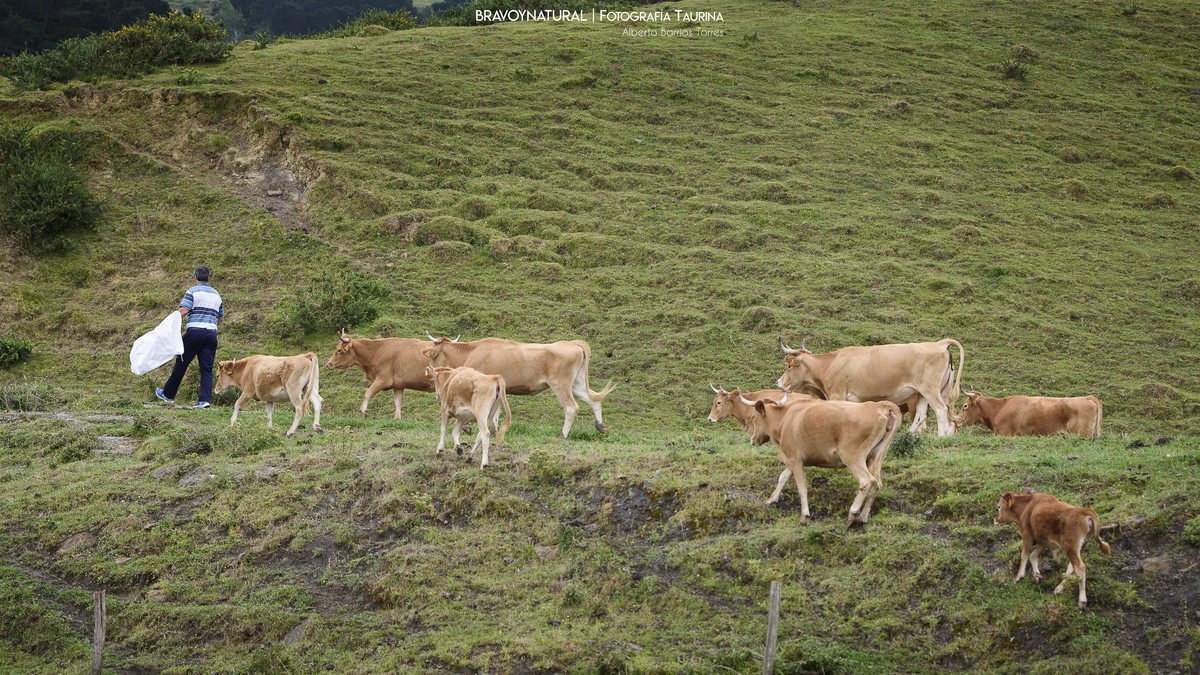 Intensive and commercial livestock farming is done in the same way in all places of the world, based on the exploitation of a few breeds specialized in the production of meat, milk and eggs, with great production needs such as feed, medicines, staging, consumption of fossil fuels, etc. (Napal and Pérez de Muniain, 2006). At the other extreme are the native races, animals adapted for centuries to the surrounding orography and climatology, and in no case with productive requirements of specialized races (Legrand, 1999).

In addition, all its races are linked to an extensive livestock production system (Reta, 2019), a huge cultural treasure that constitutes the identity of our society. In addition to historical and cultural reasons, there are other reasons for maintaining the race such as the ability to overcome environmental changes, the ability to respond to possible future consumer demands, the exploitation of poor areas, resistance to diseases, participation in rural landscape and the presence of unrepeatable genetic material (Altarriba, 2019).

On the other hand, betizu have excellent quality meat, although in less quantity than other specialized meat breeds.

Betizu, in addition to improving the growth and quality of pastures, control the accumulation of dead and dry matter, thus contributing to combat fires. The betizu who graze in the mountains throughout the year actively participate in the maintenance of the landscape and biodiversity (Gómez et al., 1997). They feed on herbs, twigs, heather, bushes, leaves and bark (Mandaluniz, 2003). The grazing action of livestock restores the diversity of the terrestrial flora and restores the chains that resurrect the soil microfauna. The decomposition of excrements enriches the plant layer, contributing to the growth of vegetation (Legrand, 1999). For example, latxa or scrub sheep, betizu and pottokas do not eat the same type of grass, so the joint or rotating grazing of these species makes the mountain clean, as they consume all kinds of plants (Viard, 2014). Therefore, betizu allow to recover abandoned spaces and contribute to their value, as well as the conservation of wild biodiversity (IKT, 2017). 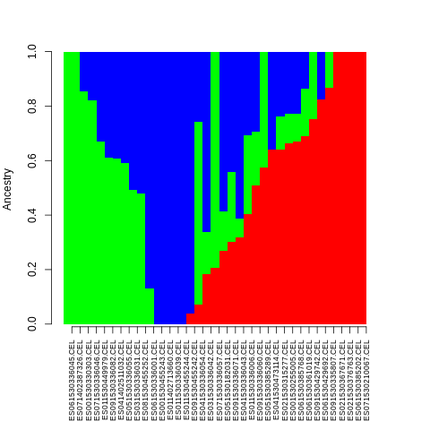 Origin of individuals according to three subpopulations. Ed. Related information

All these procedures, when applied in endangered breeds, help to ensure the future of animals by obtaining useful information on how to perform crosses, controlling consanguinity allows to avoid genetic diseases in the offspring and transmitting genes of rurality and maternity that contribute to the survival of the race.

In the year 2020 began a genetic study with the cattle of the Betizu Association of Gipuzkoa grazing in the Natural Park of Aia. The aim was to gather information to help preserve and survive the race. The study detected some subpopulations in this livestock group. After the extraction of blood samples from 37 individuals, genotyping was performed with the Axiom™ Bovine Genotyping v3 chip. The chip has 63,988 SNP markers; the SNPs are polymorphisms of a single nucleotide that modify the pure or pyrimidic base in the DNA sequence (adenine, thymine, cytosine or guanine), that is, modify a base in a certain position of a fragment of DNA. 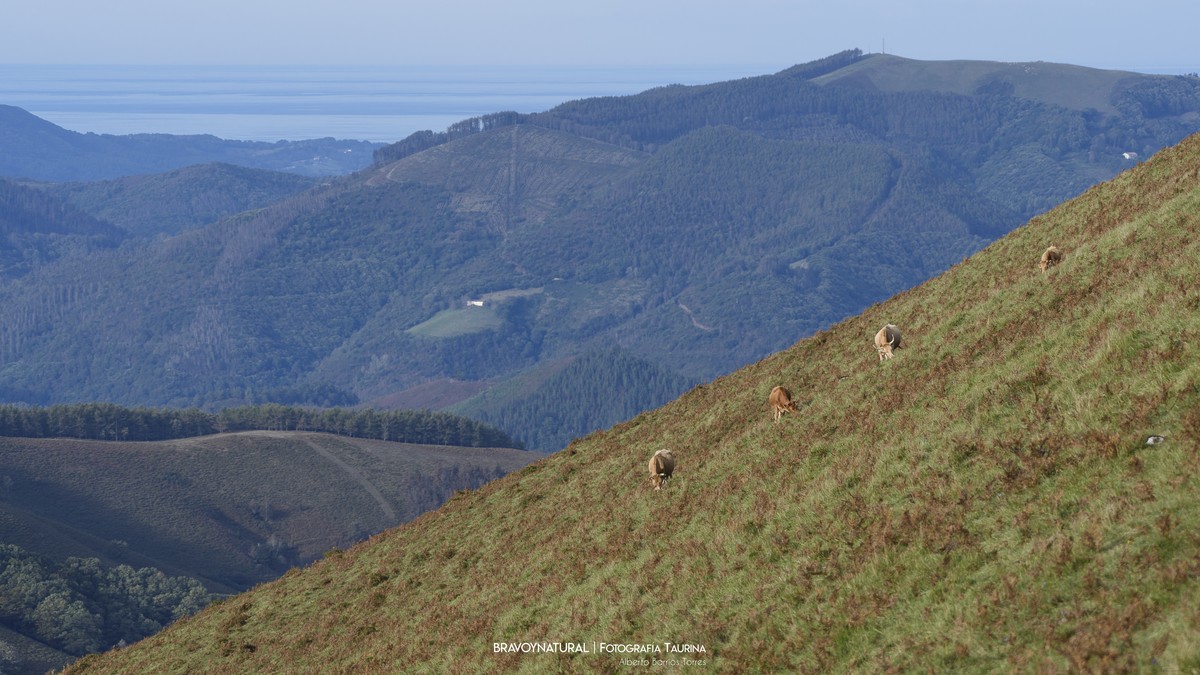 Bear in mind that the cattle of several owners of the Betizu breed are grazed in extensive communal mountains, so it is not easy task to identify which parents belong to the calves that are born and therefore their origin.

In the upper graph you can see the trace left by each origin or trunk in the genetic composition of each animal, expressed in different colors. These subpopulations coincide with the predominant cattle groups that practically had no confusion and that served to repopulate most of the betizu huts, such as Goizueta, Arano and Leitzalarrea (green), Aralar (blue) and Bizkaia (red). The graph shows the percentage of origin accumulated in each individual of genetic origin red, green or blue, which always adds 100%. For example, animals (greens) with identifiers 6045 and 7326 are of a single origin, that is, their ancestors belonged to the same group. After crossing 6045 animals (green) with 3660 (blue), 5252 animals are born, with 50% green and 50% blue.

It is important to have identified subpopulations when it is necessary to reinforce their characteristics or when there is excessive consanguinity to make appropriate mixtures between animals (Martín-Burriel et al., 2007).

Looking ahead, it has been proven that the betizu work perfectly in cleaning the mountains, in preventing fires and in maintaining biodiversity and landscape. Selling calves that graze on the mountain with a lower production cost and creating a quality seal allows the farmer to obtain an economic complement. 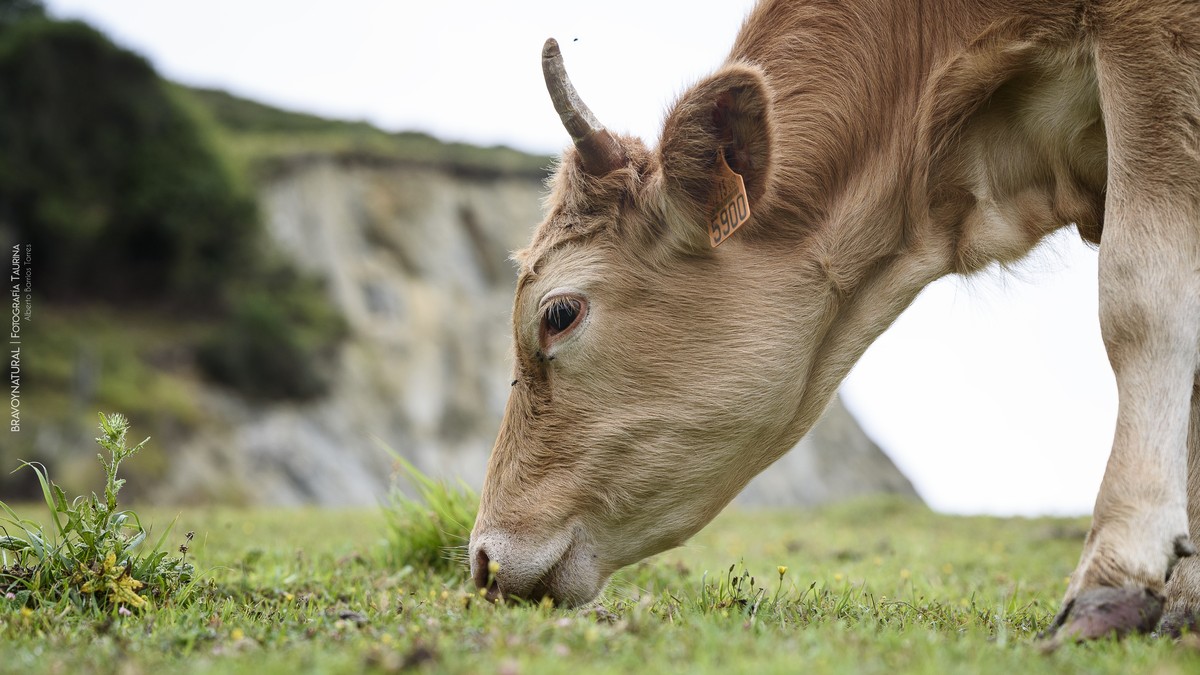 These animals can be introduced in parks and nature reserves for use as a genetic bank of purity or for studies or educational purposes such as the Natural Park of Pagoeta.

On the other hand, the usefulness of genomic research has been shown by obtaining very useful information to make important decisions in the breed conservation program. In particular, we managed to identify the origin of unknown relatives, in order to carry out an adequate planning of female crosses and to avoid excess consanguinity.

I want to thank all of you who have been with me in one way or another, Professors Luis Varona and Juan Altarriba, Eva Ugarte, Jose Mari Plazaola, Antonio Ibarguren and Arantzazu Martiarena and, of course, the ranchers of race.