The Elhuyar Foundation through the website www.zernola.net, IV. Last October the Zernola Olympiad was launched. In total, 63 classrooms from Euskal Herria participated throughout the course and, finally, the winner was the DBH 1B room of the ikastola Lauro de Loiu. The second ranked was the DBH 2 classroom of the ikastola Jaso of Pamplona and the third DBH 2A of the ikastola Lauro de Loiu. On May 19, the closing party of the Olympiad was held at the Planetarium in Pamplona, where the awards ceremony was held. 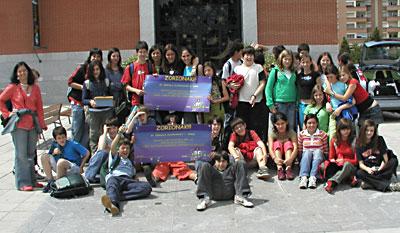 From October to May, throughout the course, about 1,200 students from Euskal Herria have been passing each month the tests that Zernola proposed. They have worked on several topics: they have become scientific disseminators and have explained the characteristics of hurricanes, have immersed themselves in the underwater world, have demonstrated their technological prowess, have solved the Hubble telescope... Everything, combining science and play.

That is the goal of the Zernola Olympiad: to show children that science is fun. Many may seem a difficult goal, but young people have shown otherwise.

All tests have worked hard and have been shown to have a lot of creativity. The presentation of the results has been made through puppets, theater, bertsos and other resources, among others, and also, as the contest is held through the Internet, they have had to send them in digital format. They have not, therefore, done hard work! 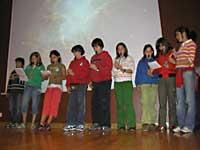 each class prepared a small inspection for the party.

Just finished the Olympiad and to celebrate the end of it was held a party at the Planetarium of Pamplona on May 19. A party full of surprises in which more than two hundred students participated.

In any case, after each test, the winners have received several prizes awarded by the Basque Government, Berria, the Aquarium of San Sebastian, the magazine Gaztetxulo, the Kutxaespacio de la Ciencia, Kukuxumusu and Karpin Abentura. And at the party all the participants have also had a detail. They win well, nothing!