Science Week at the Elhuyar Foundation

From 7 to 17 November the Week of Science and Technology was celebrated in the Autonomous Community of the Basque Country, coinciding with it, the Elhuyar Foundation organized an event.
Science Week at the Elhuyar Foundation
01/12/2005 | Andonegi Beristain, Garazi | Elhuyar Zientzia Komunikazioa 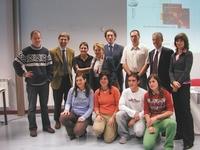 Winners of the Teknoskopioa competition with representatives of the Department of Education of the Basque Government, VICOMTech and Elhuyar.
Early morning

The two initiatives were unveiled at this event. On the one hand, the results of a study conducted by the Elhuyar Foundation were revealed. Specifically, in last July's issue we made this research more widely known. The Elhuyar Foundation has investigated the treatment of science and technology in seven newspapers published in the Autonomous Community of the Basque Country and the available space.

From 1 November 2004 to 30 April 2005, the research was carried out thanks to the collaboration of the Basque Government, and the scientist Leire Latierro presented her results at the event. Latierro himself measured during these six months the news genre and its degree of development. In view of all this, a series of conclusions were drawn, including the publication of a total of 4,489 scientific news in these 7 newspapers, which account for 2.5% of the pages of the newspapers.

With respect to data from last year's study, scientific news has experienced a remarkable boom, as only 1% of newspaper pages received a year earlier, according to data from November 2003 and April 2004.

On the other hand, the same event was held the award ceremony of the contest for young inventors Teknoskopioa. Under the theme of environmental intelligence, Teknoskopioa has been an initiative aimed at young people. The students of Baccalaureate and Vocational Training, in groups of up to four people, had to work a presentation. Participants had to imagine that they were researchers working in intelligent environments and that, taking into account the current research in this field, they had to publicize an invention of the future through a presentation.

The contest presented works from several schools and the winner was the work done by the students of El Regato School. The winners were Paula Arana, Asier de Diego, Amaia Santamaria and Jone Miren Miguel. The winners received an iPod (mp3 reader) and in the afternoon they were able to visit the VICOMTech technology center to know their laboratories and environmental intelligence projects. This award was organized by the Fagor Appliances Technology Center and VICOMTech.