At the ZerNola Olympiad, the award-winning protagonists

After working throughout the course, in early June they received the V Grand Prix. Winners of the ZerNola Olympiad. The awards ceremony took place at the Museo Artium de Vitoria-Gasteiz de Arte Contemporáneo. A hundred young people between 12 and 14 years of age participated who, in addition to knowing firsthand the influence of science and technology on current art, were able to enjoy the magic of magician Txan.
At the ZerNola Olympiad, the award-winning protagonists
01/07/2007 | Galarraga Aiestaran, Ana | Elhuyar Zientzia Komunikazioa 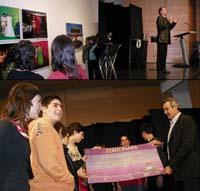 Above, seeing the works of the Artium and performance of the magician Txan. Below, the winners received the first prize.
O. Lacquering lacquered

The young people received with joy the prizes and were deserved. And it is that for months they have tried to work as best as possible. In fact, on the website enabled by the Elhuyar Foundation for the youngest, ZerNola, a monthly test was proposed to the students of 1st and 2nd of the ESO and it was tried to overcome by groups. The results were sent to ZerNola and the winners of each event received a prize.

Through the tests, students have worked on different aspects of science and technology: scientific dissemination, energy consumption, waste management, etc. In addition, converted into biologists, they have made a diagnosis of rivers; then they have worked as luthier, learning how good violins are made; they have been experts in nutrition and have prepared healthy menus; and using mathematical tools, they have worked on the decoding of secret messages.

Once this has been done, students from two classrooms of the Arizmendi-San Viator school have stayed in the first two places in the general standings: DBH2T and DBH2S. Both have received a weekend gift, the first on the island of Zuatza from the hand of the Diputación Foral de Álava and the second in the hostel of Plentzia, sponsored by the Diputación Foral de Bizkaia. The third prize went to the students of 2nd ESO of the Axular lyceum, thanks to the group Sobrón Abentura, one day in Sobrón performing archery and orientation activities.

The event also had the presence of the classified fourth and fifth, which were also awarded: Thanks to the Department of Environment of the Basque Government, DBH1S students from Arizmendi-San Viator and DBH2D from the Samaniego Institute of Vitoria-Gasteiz received a USB bracelet.

The Elhuyar Foundation wants to congratulate everyone, both the winners and the rest of the students who have worked in the tests and invite them to participate in the tests of the next course. It will be the sixth ZerNola Olympiad and sure students will find more than one surprise.