Any energy obtained from the kinetic energy (current speed) or potential (current height difference) of the water is called hydraulic energy. But if we achieve this, we will call hydroelectric energy. 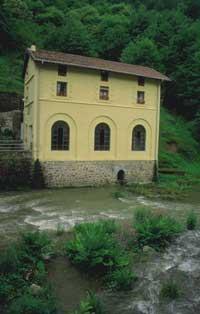 Waters of rivers and streams to. C. It is used as a source of energy since the first century. Also in the Middle Ages hydraulic energy was the basis of industrialization. Currently, however, hydraulic energy is mainly used for obtaining electricity (hydroelectric power) by passing water stored in the dam or reservoir through a turbine. This turbine is responsible for moving the alternators, so the kinetic energy of the water will become electrical energy. The higher the amount of water and the speed of water, the more electricity the hydroelectric power plant will produce. When the installed power is less than 5,000 kVA they are called Small Hydroelectric Plants or Hydroelectric Minicentals. Most of them are built in Euskal Herria.

As for history, Euskal Herria, XIX. In the 20th century many companies built their own power plant to obtain electricity. This trend was strengthened and generalized in the early years of this century. However, large companies using large reservoirs and dams, low oil prices and the high costs of these small plants caused the abandonment of small hydroelectric power plants from the 1960s onwards and the closure of many of those in operation. In recent years, however, the oil crisis and, to some extent, the impulse of alternative energies has reformed, automated and launched many of these small power plants, especially since the 1980s only 70 in Gipuzkoa).

Dam foot hydroelectric plants are usually built in large reservoirs, although sometimes the destination of the reservoir is not the electricity generation.
Adapted from EVE

The Small Hydroelectric Power Plants can be of two types: the plants with slopes and the plants of foot of prey. The first take the water from the riverbed of rivers or streams by azudes or azudes. The water then circulates through the ramp to the load chamber, from where it is directed to the turbine through the pressure pipe. The load chamber is necessary to prevent air entering the pressure pipe, which would generate excessive pressure. Once the water passes through the turbines, it is released in the place to the river or stream. The dam foot plants are built in large reservoirs built to produce electricity or other uses, at the bottom of the dam. In these cases the water is collected to the dam and inserted directly into the pressure pipe. Then, as on previous occasions, it passes through the turbines and goes to the riverbed or stream.

It is clear that water is essential for the generation of hydroelectric power, but also essential, in addition to electricity generators, turbines that affect them. The turbines can be classified into two groups: the action turbines, which work for the water discharge speed, and the reaction turbines, by the pressure and speed of the water. In the small plants of our country are used those of the first group, which are usually of three types. Kaplan turbines are suitable for small jumps (under 30 m) and large flows. However, Francis turbines adapt to the intermediate situations of the previous ones and can be used in a wide range of flow and water jump. However, regardless of the type of turbine used, the power to be installed and the amount of energy to be produced throughout the year must know the flow of the river or stream at this point. 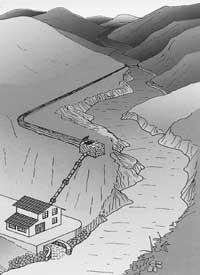 This is done taking into account different parameters (precipitation, soil type, etc. ), but always with a long series of years to enter the dry, normal and rainy years. This data calculates the rated flow and flow rate (water flow in annual days) of the channel in each day. The latter will be subtracted from the ecological flow, that is, the minimum flow required by the channel throughout the year and Q80 and Q100 are calculated, that is, the existing flow between 80 and 100 days a year. With them you can know the number of days that each type of turbine would work and, therefore, choose the most suitable.

Hydroelectricity has important advantages. On the one hand, the energy conversion performance is very high, between 80 and 90%, and on the other, especially in small systems, the negative ecological impact is or can be low. It is currently the simplest and cheapest way to obtain energy, being the most used in renewable energy sources.

Small hydroelectric power plants use turbines depending on the achievable jump and the available water flow.
Adapted from EVE

In hydroelectric plants, although they do not consume or pollute water, they hinder the migration of fish and the correct transport of food downstream, drastically alter the dynamics of the river, drastically reducing the flow of water in some sections of the riverbed, altering the level of the groundwater layers and the composition of the packaged water. In cases where small dams are replaced by reservoirs, their construction produces great changes in the submerged territories, both ecological and social.

In fact, the places where large dams and reservoirs are built are often of great ecological value and, in addition, many of its inhabitants have to move to other places. The magnitude of these damage depends on the size of the work and it is essential that adequate socio-economic and ecological studies are carried out before the work and that corrective measures that are considered ecologically acceptable are properly applied (adequate ecological flow retention, special structures for fish to overcome prey, etc. ).