We don't accumulate only on the surface

"A few years ago a satellite broke into thousands of parts in a test of anti-satellite weapons. Since then, the small metal fragments of the satellite have rotated and rotated around the Earth, at a speed 100 times higher than that of a bullet without detecting radars and through unknown routes. At
563,265 kilometers from Earth, a piece of canical-sized metal seems really tiny and unique. But it will no longer be a small and unique one, because the only X-ray telescope in space in the United States is in the process of colliding with some fraction." 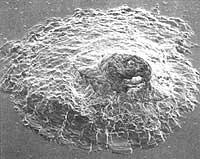 In June 1983, a piece of paint the size of a post stamp manufactured this crater in the Challenger window.

It has not yet happened, but it can happen. There is increasing evidence of the collision of satellites and guided vessels in orbit. However, these collisions have not been very serious.

The space around our planet is polluted. The American Air Defense System (NORAD) currently detects 6,194 radar objects in terrestrial and interplanetary space. Only 300 of them are operating satellites. Around 40,000 fragments of the size of the golf ball and to a lesser extent, the radar does not detect. Among these objects, fragments of launchers used, launcher panels, fragments of exploded satellites, etc. They can be found. As well as tools that have disappeared slipping from the astronaut gloves.

Undoubtedly, the largest proportion of space waste comes from the explosion of parts of launchers and satellites. Around eighty explosions have been caused by the combustion of the coatings of the launchers used and by intentional explosions for the testing of space weapons.

Unplanned explosions of the launcher stages can occur after a launch. Karl Henice of the Johnson Space Center says the thin walls that separate fuels from launcher fragments seem to run, mix fuels and explode.

Some coatings, like the Delta launcher, burn after three years. And recently a piece of pitcher Ariane exploded in orbit after a year, throwing millions of fragments.

The intentional explosions in space have occurred since man entered space. In the late 1950s, the United States exploded atomic heads in the upper atmosphere and in the lower orbits. And for a generation the Americans and Soviets have injected in their defense tests into the Earth's low orbit about 10 million pieces of waste into low and high orbits.

Although the Soviet Union decided to prolong the stop of anti-satellite testing in June 1982, the United States continued to test. In September 1985 Solwind, a solar research satellite, was destroyed by an experimental missile. According to NORAD data, the destruction of the Solwind satellite left a fog of 480 kilometers in length consisting of three thousand tangible and innumerable fragments. Following this test, however, Congress banned anti-satellite evidence against objects in space. But the new intentional explosion in space occurred in September 1986, within the sessions of the Strategic Defense Program.

Despite not causing more accidental or intentional explosions, the heap of fractions already in orbit can produce more waste. According to NASA scientists, the enormous speed with which space particles are touched can produce between 8 and 10 kilometers per second, hundreds or even thousands of additional particles, depending on the size of the fractions being hit. The addition of these particles can cause collisions with other satellites or particles in the chain reaction, resulting in a belt of waste around the Earth.

Although many people do not believe it, space is not self-generating. Although objects in orbit near Earth are easier to attract into the atmosphere, particles located at 290 kilometers will take days and months to re-enter the atmosphere. And while they remain in orbit, they are a threat to the work of satellites and astronauts.

480 kilometers (if you are installing space stations or at a normal orbit height of telescopes and other scientific satellites), you are in a residual environment, experts say.

NASA began to worry about waste from June 1983. At that time, a piece of scrap the size of a seal hit the Space Launcher Challenger.

In turn, the graphical proof of the damage these space particles can cause was the recovery of the Solar Maximum Mission satellite in 1984 by Challenger astronauts after four years at 563,265 kilometers. In the satellite microphones, thousands of craters could be seen in the exterior aluminium.

The Hubble Space Telescope is expected to be launched in 1988 (for 17 years) and may not be maintained until the mission is completed. There is a possibility that the waste will destroy the telescope in a percentage, at least if it is waste of 5-10 millimeters. 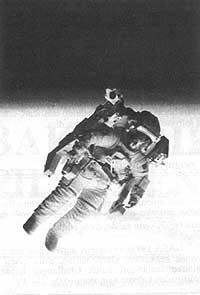 Astronauts working outside the satellite can be very dangerous.

The union with a ten-centimeter span or higher would destroy the space telescope. Unlike many satellites, the Space Telescope has no engine to get away from the path of a nearby piece of waste. The detection of this type of waste would not help.

Implications for astronomy from the ground

Large objects such as Space Shuttle or the Soviet space station Mir are easily visible to the naked eye. Others are not visually selectable, but with sensitive photographic emulsions. Most satellites and space remnants of orbits near Earth can only be seen hours after sunset or before dawn. They are therefore not an obstacle to observatories on Earth.

But in the case of broken satellites and disintegrated launchers located 36,000 kilometers from Earth in geostable orbits, the problem would be more serious, since the time of observation and disintegration is infinite.

For astronomy located on Earth, the seriousness of the problem caused by space waste will depend on the type of research being carried out by the astronomer. For example, analyzing a bright point in kneading has no problems. Spectrographs with narrow light input and focal length between f/8 and f/11 will not be affected. And those with a viewing area of less than 25 square degrees receive some satellite very punctual.

However, if astronomers are studying large gripping areas or photographing almost imperceptible objects and performing long concentrations, satellite remains may appear on the plates.

The main victims are observations made with low-focal distance telescopes used for long concentrations such as the Schmidt telescopes at the Palomar Observatory in California and the Anglo-Australia Observatory.

However, optical astronomers consider the effects of waste on their work different. Although for some the satellite remains are not so important, others completely discard the plates with traces, since they consider that they have an excessive influence on this science that is being worked. 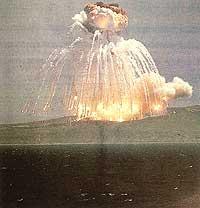 Explosion of a projector, in this case called Titan. If the explosion had occurred in space instead of on the ground, it would have filled with eleven waste.

Can the space be cleaned?

Space-residue becomes a serious problem if nothing is done. NASA and other companies are studying the possibility of cleaning the waste that is just around the Earth. Prevention, on the other hand, seems more practical and effective coastal.

Satellites are becoming more modular, so the need for external devices is getting smaller. And a new NASA procedure (which uses all the launcher fuel during the flight) discards the problem of explosion of launcher coatings.

What else can be done? Perhaps an international agreement on preventive measures should be taken into account. Unfortunately, it would be difficult to get the ban on intentional space explosions, as it is more a political decision than a scientific decision. However, without international agreement on space waste, individual efforts will be useless.

If man continues to fill the space around the Earth with rubbish, the sending of fine scientific instruments becomes a danger and, in case of accident, costly. Shutting down or disappearing prematurely a mission like the Hubble Space Telescope would be an incalculable tragedy, as the amount of information that would be lost or how much it would cost to put another of these characteristics into orbit cannot be evaluated.