They map for the first time a giant liquid water system on the Antarctic ice. 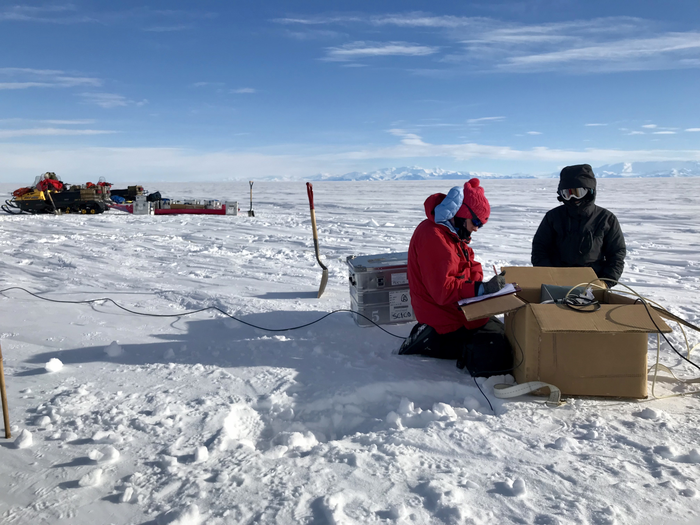 Researchers installing instruments for studying the underlying sedimentary basin on the Whillans Ice River in West Antarctica. Ed. Kerry Key/Lamont-Doherty Earth Observatory For the first time, in the icy part of Antarctica, a giant liquid water system has been mapped. This work has been done west of Antarctica and has been published in the journal Science.

Until now, only surface water and lake systems were known. They are also fundamental to understanding the behavior of glaciers, so much research has been done on them in recent years. Researchers suspected that liquid water systems could also be under ice. Now, researchers at Columbia University have confirmed that the hypothesis was correct and underlined its importance, especially for the possible consequences of climate change.

Studies conducted in the past, such as radars, between the ice and the rocks at the bottom, revealed the existence of sedimentary basins. Surveys have tried to check for liquid water, but it was not deep enough. So the behavior of the ice sheet only involved surface hydrological systems.

In fact, most of the expansive sedimentary basins in Antarctica are below the current sea level. They appear to have emerged on the seabed during the warm periods, when sea levels were higher. This study focused on the Whillans ice stream, one of the sources that feeds Ross's largest ice shelf.

This confirms the existence of a liquid water system in the sediment at a depth of 220-820 m (and perhaps deeper). Salt water conducts energy better than fresh water, showing that groundwater becomes more salty in depth. On the other hand, they consider that fresh water flows from sediments to the ocean, leaving room to melt more and maintain a stable system.

According to researchers, if the surface of ice melts due to climate warming could change the direction of water flow. But they haven't done enough research to know how likely this is to happen, or to predict its possible consequences.

In addition, knowledge of the presence of microorganisms in shallow sediments generates new hypotheses. In fact, it's likely that in that sedimentary basin that's been researching there are microorganisms in depth, and if groundwater is starting to move up, the carbon from these organisms could get into the ocean. But they are not yet able to predict their possible consequences and, where appropriate, how.

It is clear, then, that there are many questions to answer, but at least with this research they have achieved results that will radically change the existing models.