A summer with sheep following their instinct 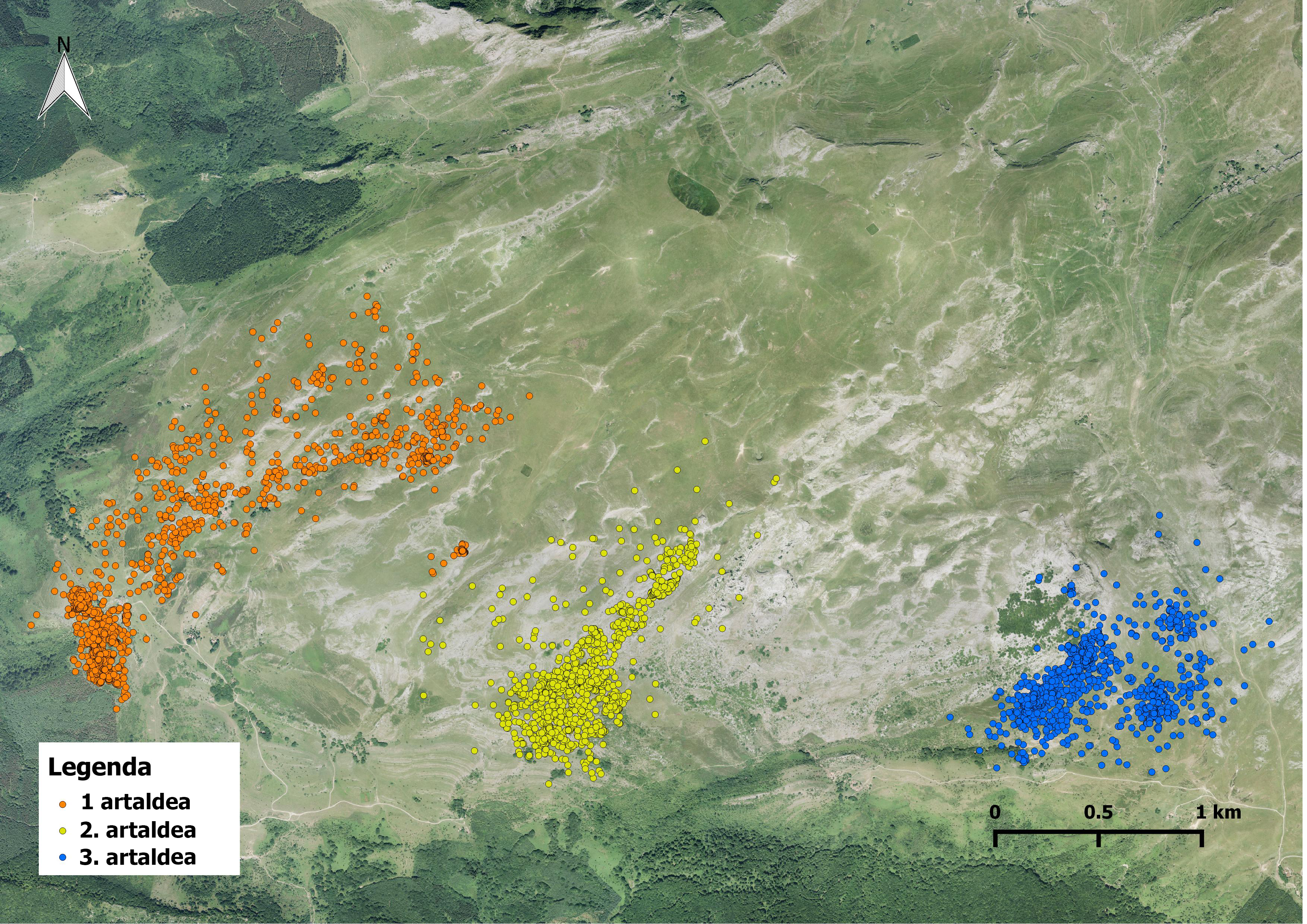 Figure: Area of research and spatial distribution of experimental herds, represented by the location of the sheep, in the natural park of Aralarko-Enirio. Ed. Mikel Etxeberria Okariz

Since the first shepherds brought their sheep to the Basque Country they have spent thousands of years adapting to the area. The best adapted sheep have left more descendants, so the sheep we have today know perfectly the environment in which they live. In other words, they have modeled their instinct to survive the best possible in the Basque Country. Thanks to their instinct, although they continue in the field when it rains, when hail arrives, they put themselves under shelter, either in the stable or under a rock. Not even with the great summer heat can be in full sun, and they are able to predict great thunder.

The sheep follow their instinct to escape the great storms and hail, but do they follow their husband to eat? What habitat do they choose? Or instead of choosing, do they eat what they have in front of them?

In order to answer these questions it is necessary to know the movements that the sheep make daily and if they exploit all the places with the same intensity. This is called the use zone and calculates the grazing intensity in the sheep grazing area. However, in order to do the calculation, sheep locations are needed, so 40 sheep from three herds were selected and a GPS collar was placed for two months to record their positions (Figure 1).

With the use of these locations, the areas of use of the sheep were determined (Figure 2) and it was concluded that the sheep exploit the territory in a heterogeneous way, that is, spend more time in some areas than in others. In general, the most commonly used areas are those close to the shepherds' shacks, but although the darkest areas of the image correspond to the shacks, there are also other areas quite used. With this information, we were able to answer the first question: the sheep choose where to walk, prefer places to others.

Once the first question is answered, we start with the second, what habitat do you like? For this it is necessary to know the area of life of the animal (Figure 3), that is, the necessary terrain for the animals to develop all their activities. Although there is little time in some places, it may be necessary at certain times of life. In the breeding season, for example, they take a special diet to properly produce milk, so they use regions that would not use it throughout the year.

The estimated living areas were plantations between 59 and 170 ha, which caused the shepherds to return the sheep twice a day to the cabin, so the sheep could not use the desired territory. The maximum distance away from the shack was 3 km, which allowed to find a suitable habitat in these hectares.

Once the location of the sheep was known, the types of habitats present in the area.To do this, we based on vegetation maps and saw that the area occupied by the oaks was formed by five habitats:

The location of the sheep and the vegetation maps allowed us to know the plant community in which each of the locations is located, which allowed us to know which were the most used habitats. However, this is not enough, since in the most abundant habitats there were more locations than in the rest. Therefore, we compare the habitat used by sheep with their availability. That is, if the sheep were to move randomly, without any priority, they would use the most present habitat in the territory and the least abundant. The number of location points in each habitat allows to know if they use the expected randomly, if they use it less or more. And, therefore, it can be clearly observed if sheep tend to choose a habitat or expressly avoid it (Figure 4).

Figure: Selection of herd habitats. In white, the available habitat area and in grey the proportion they choose. Ed. Mikel Etxeberria Okariz

Figure 4 shows that sheep used all habitats, that is, they needed all the plant communities in their area of life to live well. However, despite the importance of all habitats, it is clear that scrubland was less important. So small that since they were within reach (the white bar of the image) very little was used (gray bar).

The dense grassland, entirely made up of herbaceous plants, used less than they had available, but the sheep spent much time there. Sheep need a lot of food, as grass is a little energetic food. The most present habitat in the sheep use zone is dense grassland, which is used by sheep as a great source of energy after transition pastures (Figure 4).

On the other hand, the transitional pastures, the nitrophilic zones and the bushes are specially chosen; they liked for their potential habitat, to the point that the locations of the sheep were found more frequently than those expected randomly in the transitional pastures, nitrogenous zones and wooded areas (Figure 4). The transition pastures are the means between the dense pasture and the stony, that is, although they are extensive pastures, occasionally appear stones that, as a consequence of this singular structure, present a greater diversity due to the presence of species of both rocky pastures and dense meadows. Sheep choose areas of great diversity, because in this way they can eat a lot of herbs in a small space, optimizing the diet, maximizing quality and minimizing effort.

Nitrophilic and wooded media are also widely used, but not for food, but for reflection. Sheep, ruminant animals, take a long time to digest cellulose and at that time they tend to be lying down. When they are lying down, they release nitrogen to the soil, as they defend themselves there, forming nitrogen habitats. On warmer days, on the contrary, they are protected under trees, so they are used both wooded. As for stony pasture, they do not choose or reject it, that is, they use it as expected randomly.

In short, it can be said that sheep have a clear preference for the most accessible habitats. However, the choice of these habitats is relatively clear and also give different use to each type of habitat. Animals do not exploit the environment at random, have transition pastures to feed with taste and dense meadows are necessary for sheep to eat enough. For reflection they use gloomy and nitrogenous means.

In this way, this work has shown that the sheep follow their instinct when it comes to eating and that they like pastures of great diversity and areas of shade for reflection. They know what they want to eat at each time and what the food and energy they need will bring. It is essential to know all this information if we want to maintain environments such as Aralar. And we need different types of pastures to maintain the health of sheep and sheep to maintain them. What would Aralar be without cattle? 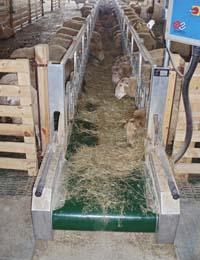